Two of New York’s top officials made some waves in the Adirondacks on Monday.

Gov. Andrew Cuomo and New York City Mayor Michael Bloomberg, both in a tense relationship in real life, took their competitive streaks to the rafts as they paddled down the Indian River in a race on the second day of Cuomo’s inaugural “Adirondack Challenge” in Indian Lake. 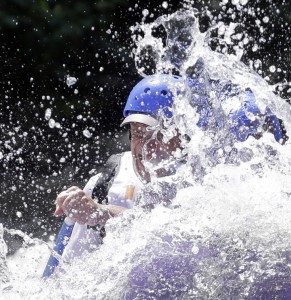 The governor’s team beat the mayor’s by 18 seconds, running the course in 18 minutes, 31 seconds to 18:49 for Bloomberg’s raft. The two teams were each allowed six rowers. Cuomo’s original team of 12 had practiced heavily in the past weeks until it was whittled down to six, while Bloomberg kept his team hidden until Monday.

Two heart-stopping moments occurred — when Cuomo’s secretary to the governor Larry Schwartz fell overboard in middle and when Bloomberg responded to his loss by jumping in the water and doing a lap.

Cuomo and a host of other state and local officials and business leaders participated in paddling events starting Sunday. Cuomo said the event was designed to draw attention to the recreational opportunities in the Adirondacks and to boost tourism.

On Sunday, the Governor’s Invitational whitewater race packed 25 rafts with state officials and members of the media. The governor’s team also won that competition, beating state Senate and Assembly teams.

This article appeared in print on page 5 of the July 23rd, 2013 edition of Hamodia.