Councilman Lander to Be Honored at White House 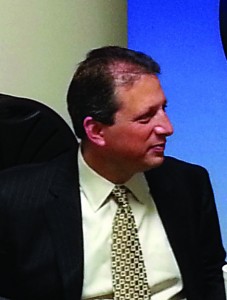 Councilman Brad Lander is being honored by President Barack Obama Tuesday for bringing participatory budgeting to his district, which includes parts of Boro Park.

The progressive Democrat, who was elected to the council in 2009, will be named a “Champion of Change” at a ceremony at the White House for making the public a part of his budget process. His constituents — rather than the councilman — decide how millions of dollars in discretionary funds are spent.

“It is a pretty common sense idea that people in a community know what is needed in that community,” Lander said in an interview with Hamodia on the topic last year.

“They may not know the best way to run a fire department but they know a lot of what their neighborhood needs, especially on some of the more physical projects. They know which parks are run-down, which streets are especially dangerous.”

Eight of the council’s 51 members, including neighboring Councilman David Greenfield, now participate in the program Lander initiated. They are advertised asking, “What Would You Do With a Million Dollars?”

The idea for participatory budgeting started with Jaime Lerner, the Jewish mayor of the Brazilian city of Curitiba. It later spread to Chicago and Lander brought it to New York in 2011.

One of their greatest fears was that the project would break down into a goof-fest, Lander said.

“Someone said we should have gondolas on the Gowanus Canal,” he recalled. “My favorite was a public seltzer fountain. Instead of a water fountain, a fountain that would give seltzer.”

But in the end, 2,000 people voted on 20 projects, and seven were selected for a total cost of $1,000,050. Among the projects was a bathroom in a public school fixed and a new $50-million ice rink had a drain installed.

This article appeared in print on page 4 of the July 23rd, 2013 edition of Hamodia.