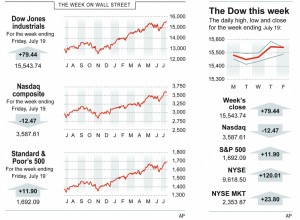 A bad day for technology stocks Friday slowed a recent surge in the stock market.

Microsoft led the slump in tech, falling the most in more than four years after the company wrote off nearly $1 billion on its new tablet computer and reported declining revenue for its Windows operating system. Google dropped after its revenue fell below analysts’ forecasts, partly because the internet search leader’s ad prices took an unexpected turn lower.

Despite the market’s broad advance, a growing list of poor tech results is raising concerns about the strength of the economy and the stock market. Intel and eBay also reported weak results this week, and chipmaker Advanced Micro reported a second-quarter loss because of a worldwide slump in PC demand.

Technology “has definitely been a sector that people have been expecting big things from and it has not delivered,” said Randy Frederick, Managing Director of Active Trading & Derivatives at the Schwab Center for Financial Research.

The Dow Jones industrial average closed down 4.80 points, or 0.03 percent, to 15,543.74. If not for the declines in Microsoft, Hewlett-Packard and IBM, the index would have gained about 70 points.

Even General Electric’s brighter outlook for the U.S. economy on Friday was overshadowed by the tech slump.

The technology-heavy Nasdaq composite fell 23.66 points, or 0.7 percent, to 3,587.61. The index was the only major market benchmark to end the week lower, falling 0.4 percent.

Technology stocks in the S&P 500 have lagged the S&P 500 this year, gaining only 8.5 percent, versus 18.6 percent for the broader index. The industry is one of four of the 10 sectors in the S&P 500 that are expected to see earnings growth contract in the second quarter.

The stock market has risen sharply in July after the Federal Reserve reassured investors it wouldn’t pull back on its stimulus before the economy is strong enough. The U.S. central bank is currently buying $85 billion in bonds every month to keep long-term interest rates low and to encourage borrowing and hiring.

In government bond trading, the yield on the 10-year Treasury note fell to 2.48 percent from 2.53 percent late Thursday. The yield has fallen from 2.74 percent on July 5, when the government reported strong hiring.

This article appeared in print on page 8 of the July 22nd, 2013 edition of Hamodia.