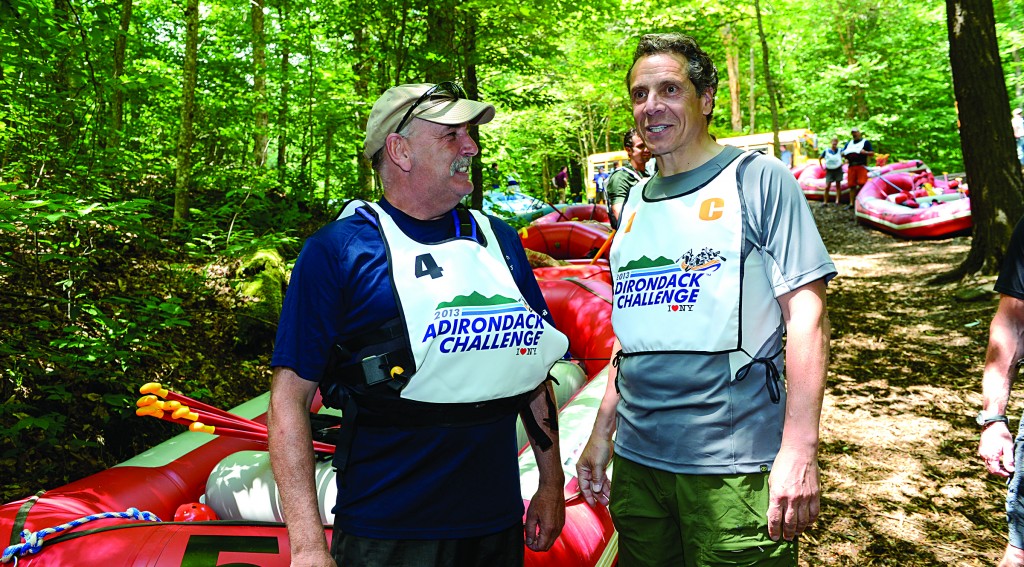 Gov. Andrew Cuomo and Mayor Michael Bloomberg are in full gear for the whitewater races Sunday and Monday, events meant to promote tourism in the Adirondack region.

Cuomo’s team for his Adirondack Challenge includes the governor, his daughters Cara and Michaela, his secretary Larry Schwartz, and Deputy Secretary for Civil Rights Alphonso David.

It was not easy getting to be on the raft, the Wall Street Journal reported. In recent weeks, Cuomo has had his aides face off in a series of strength competitions, such as pushups or stairway racing, with Joe Percoco, the governor’s tough-talking executive secretary, overseeing the contest.

Other teams represent the tourism industry, the state Senate, various counties and state agencies. But the big race comes on Monday, when Cuomo will square off in a canoe race against Bloomberg.

There has been intense speculation for weeks on how each side intends to beat the other team, with Cuomo joking at his state-of-the-state address in January that the Senate will have two rowers taking the boat in two directions — a rib at the co-majority team of Republican Dean Skelos and Independent Democrat Jeff Klein.

Skelos and Assembly Speaker Sheldon Silver have already said they would not participate, but Klein, who has never raft-raced before, said that his ethnicity may help him.

“Jews are naturally strong rowers — we used to do it full-time for the Roman Empire,” Klein said, referring to the Roman galleons.

Known for his competitive streak, Cuomo has been watching his food intake these past few weeks to ensure he does not lose to the New York City mayor. But a secret GOP coup may be in the offing to secure a victory over the Democratic governor on a different front.

“[Cuomo] was quizzing me about the different strokes to use,” state Sen. Joe Griffo said in revealing his strategy. “So when he was in Herkimer the other day, the county executive and I kept feeding him Italian pastries. Our strategy is to weigh him down.”

The strategy appeared to have caught the governor unawares. Cuomo, who estimated he had unwittingly “consumed about 4,000 calories in an hour,” said “it was a sneaky ploy by the Senate, I have to admit, in retrospect.”

“They called me afterwards, and they just tightened the trap,” Cuomo said. “Senator Griffo said, ‘Well, did you enjoy the pastry?’ I said, ‘As a matter of fact I did.’ He said, ‘Well, think about that when you’re on the raft going down the rapids.’ Next time the Senate comes bearing pastry,” he added, “I’m gonna know they’re up to no good.”

Asked how important it was for him to beat Bloomberg, who in real life has clashed with the governor on a range of topics, Cuomo said, “Well, winning isn’t everything. But it’s very nice.”

“Mayor Bloomberg, I know, is taking this quite seriously,” Cuomo admitted. “We have scouting reports on the New York City team. They’ve been practicing. Some people say he’s been recruiting people to join his staff just to put together a good rafting team. I don’t know if that’s true, but…”

But mayoral spokesman Marc La Vorgna insisted, “We are definitely the underdog; they have home stream advantage.”

“The governor has home-field advantage and the ability to amp up his staff with giant sugary sodas,” said political commentator Steve Greenberg, who predicted that Cuomo will win. “That, and the fact the mayor’s staff may be forced to wear suit and ties.”

The gubernatorial and mayoral teams will have six members to man the oars. If Bloomberg wins, Cuomo has promised him a package of products produced upstate. If Cuomo wins, the mayor will send a package of NYC products.

But what will they do if his team fails to deliver victory? Bloomberg has not been saying much of his strategy, but Cuomo has been ominous about the post-race future for his staff.

“There will be new staff,” he said.