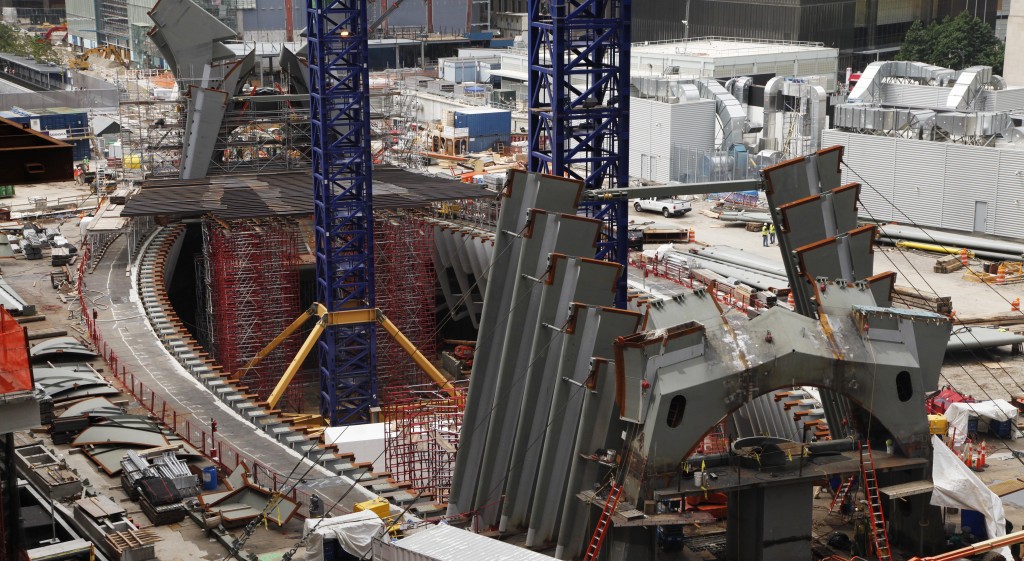 Hundreds of workers are busy around the clock building the nearly $4-billion World Trade Center transportation hub, its white steel wings starting to rise into the Manhattan sky as a remembrance of those who died on 9/11.

Designed by Spanish architect Santiago Calatrava, the complex will be “a light-radiating work of art” when it opens sometime in 2015, trade center construction director Steven Plate said during a tour Wednesday.

Under construction are the two winglike sections to be separated by a special feature — a skylight that will open like a huge eye. On each Sept. 11, this “oculus” will be aligned so direct sunlight will shine through the glass at 10:28 a.m., the time when the second tower collapsed in 2001.

His inspiration for the design, Calatrava once said, was a child releasing a bird.

Towering over the hub is the 104-story One World Trade Center, the centerpiece of the rebuilt 16-acre trade center site. And right above the complex lies the 9/11 Memorial plaza with its reflecting pools.

Plate compared the hub’s 150-foot-high main hall to that of Grand Central Terminal, with 100,000 square feet of upscale retail space planned to serve about 250,000 commuters passing through each day.

More than 12,000 tons of steel is needed to complete the complex, with up to 500 people working there in any given 24-hour period.