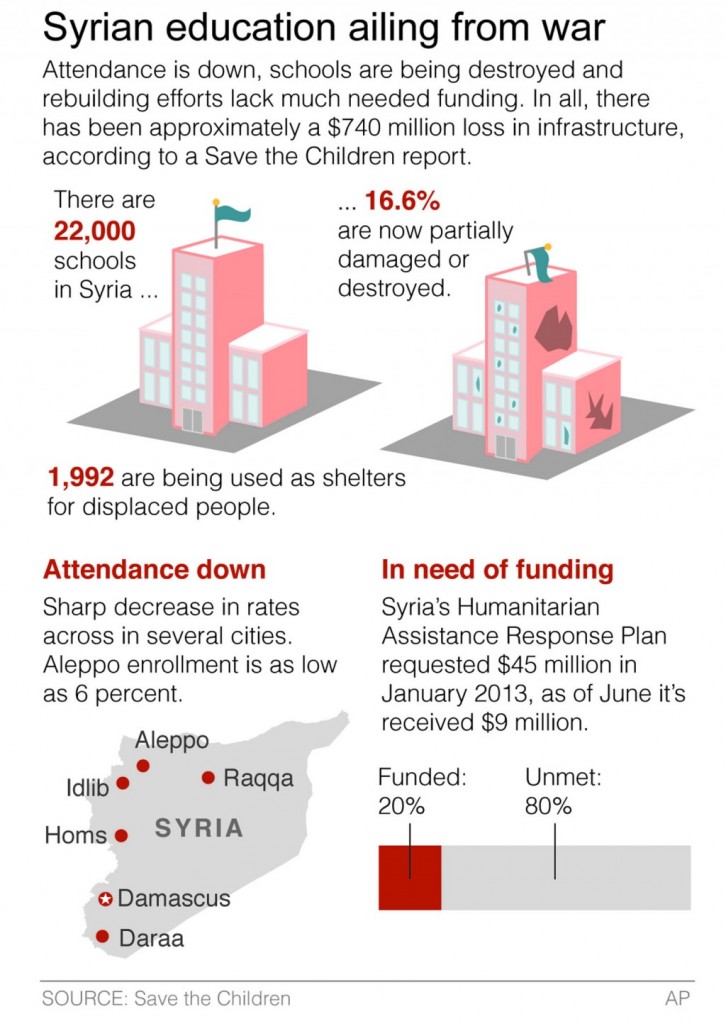 Abdullah, a 9-year-old orphaned by Syria’s civil war, was piled in to van by his uncle as gunfire rattled around them. One of the last things the boy says he saw in his hometown was the uncle falling, shot, as the van full of strangers took him away on a treacherous, 3-day journey to neighboring Lebanon.

Once in Beirut, the boy fell into the hands of a criminal gang specialized in exploiting the most vulnerable victims of the conflict next door. They put him to work selling flowers and gum on the street, beating him if he didn’t bring them enough money.

The conflict that has ravaged Syria for more than 2 1/2 years has hit the country’s children hard. Out of an estimated 93,000 killed, around 7,000 are children below the age of 15. Tens of thousands are believed to have been wounded. Hundreds of thousands of children have had their lives upended, fleeing their homes with their families either to different parts of Syria or abroad. Unknown numbers have been detained.

Syria “will have to face a generation of children who lost their childhood, have a lot of hate and are illiterate,” Leila Zerrougui, the United Nations’ special representative for children and armed conflict, said Thursday. She spoke in Beirut after a 3-day visit inside Syria, where she met with both government officials and rebel commanders fighting to topple President Bashar Assad’s regime.

Education is one of the most obvious problems from the child victims of the conflict in the country of 24 million people. A recent report by the Britain-based charity Save the Children estimated that hundreds of thousands of children have not attended school in the past two years. It warned that the civil war is reversing one of Syria’s main pre-war achievements — in 2010, nearly all children of school age had completed primary school.

Inside Syria, thousands of schools have been destroyed. Others serve as shelters for displaced families. Some 5 million people have been driven from their homes, fleeing either elsewhere in Syria or abroad, around half of them children under 18.

For those who flee into Jordan, Turkey, Lebanon, Iraq and elsewhere, the U.N. has set up schools programs in refugee camps. But it is struggling to keep up with demand — and most of the 1.7 million Syrian refugees don’t live in camps. Zerrougui estimated that around half of the nearly 900,000 refugee children do not go to school, and 70 percent of those that do drop out.