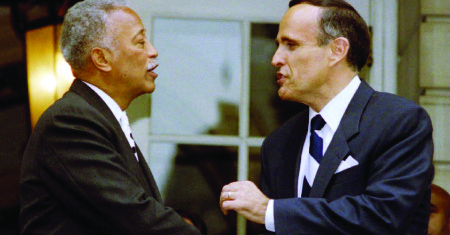 In the first formal response to his steadily cementing legacy as the “Crown Heights mayor,” David Dinkins writes in a memoir that it was untrue that a mayoral order prevented police from stopping rioters, The New York Times reported.

“There was no order given, there was no unstated code, there was no tacit understanding, there was nothing anytime or anywhere that authorized the police not to do their jobs, to stand down, to allow the black community to attack Jews and create mayhem,” wrote Dinkins, who as New York City’s first black mayor presided over the lowest point in race relations between blacks and Jews.

The former mayor’s assertion angered Joe Lhota, who served as deputy mayor under Giuliani, who recalled newspaper headlines at the time saying, “Dave, Do Something!” and editorials claiming that the city was “ungovernable” and unmanageable.”

“David Dinkins is wrong to claim that is why he lost his re-election,” Lhota, a current Republican candidate for mayor, said in a statement Wednesday. “He’s doing a disservice to New Yorkers by reducing the debate to incitable comments about race. Both Democrats and Republicans voted him out of office because he was incapable of governing the city.”

Lhota cited the city’s sky-high crime rate, welfare rolls and the riots, and called on Dinkins to apologize for his contention.

The riots in 1991 occurred after a member of the Lubavitcher Rebbe’s motorcade accidentally skipped the sidewalk, striking and killing a black child in Crown Heights, where the two communities have lived in tense proximity for decades. Angry blacks leaving a concert later that evening set upon Yankel Rosenbaum, Hy”d, killing the visiting Australian scholar.

Jews cowered in their homes for three days as police stood by watching the riot. But Dinkins says that he berated his police commissioner, Lee Brown, over the anarchy.

“How dare you let it get this way!” he writes he told Brown. “I want every officer that can be sent to Crown Heights to be there tomorrow. If you have to use horses, add the horses.”

Dinkins went on to lose his re-election the next year to Republican Rudy Giuliani, a former U.S. attorney who hammered at the security lapses under Dinkins and the huge number of murders that were occurring each year.

In his book, while Dinkins admits that “in many ways, the police department failed and the buck stopped with me, the mayor,” he blames his ultimate loss on people’s reluctance to vote for a black person.

Dinkins credits his plan to hire more police officers by raising taxes for the city’s decrease in crime.

“I drove down crime faster than any mayor in New York City history,” he asserts.

In the memoir, written in collaboration with Peter Knobler, the 86-year-old former mayor aims his bitterest salvos at his successor, describing Giuliani as “a cold, unkind person” who “apparently has some difficulty apologizing for anything” and who practiced “the politics of boundless ambition without the guidance of a set of core beliefs or the humility and restraint of experience.”

He accuses Giuliani operatives of spying on his campaign and says that his underlying message was “The city is in terrible financial straits. Do you really want a black man presiding over it in this time of trouble?”

He also accuses Giuliani of “all but inciting the police to riot” during a protest over Dinkins’ 1992 support for a civilian review board for the Police Department.

“Would the cops have acted in this manner toward a white mayor?” he asks. “No way. … If they’d done it to Ed Koch, he would have had them all locked up. … Nobody ever paid a price for their behavior during the demonstration. Outrageous, absolutely outrageous.”