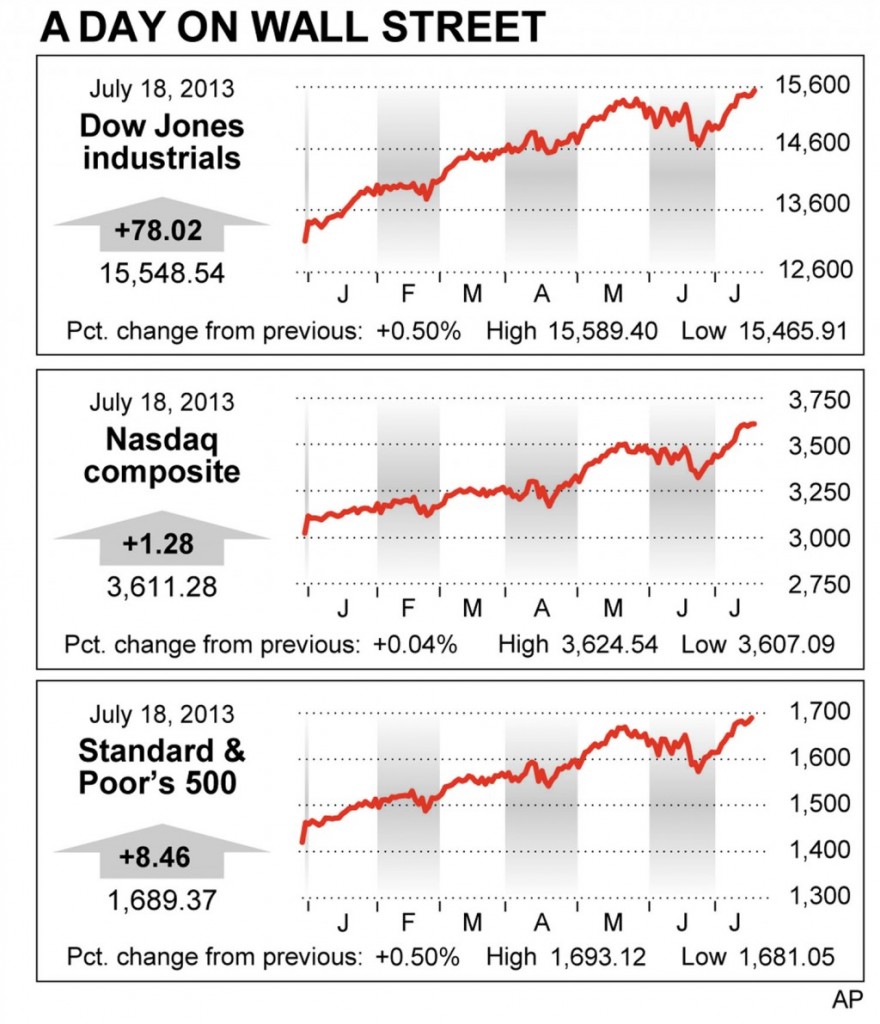 A drop in claims for unemployment benefits signaled a healthier economy and encouraged investors to buy stocks. The Federal Reserve Bank of Philadelphia said manufacturing in its region grew at the fastest pace in more than two years this month.

Among companies reporting second-quarter earnings, Morgan Stanley was one of the standouts, rising $1.16, or 4.4 percent, to $27.70. The New York bank reported sharply higher earnings driven by investment banking gains and said it planned to spend $500 million buying back its own stock. IBM rose $3.44, or 1.8 percent, to $197.99 after its profit beat analysts’ forecasts as software sales grew.

Energy companies rose after the price of oil shot up to a 16-month high on signs that the economy is improving. Technology stocks lagged in the market after lackluster results from eBay and Intel. Industry bellwethers Google and Microsoft both plunged 5 percent in post-market trading after reporting disappointing earnings after the close.

The stock market is back at record levels after pulling back in June amid concerns that the Fed was poised to reduce its stimulus program. The S&P 500 has gained 5.2 percent this month and is up 18.5 percent for the year, putting it on track to log its best annual performance since 2009, when it rose 23.5 percent.

The Federal Reserve’s $85 billion of monthly bond purchases, intended to hold down long-term interest rates, has been a major factor supporting the rally in stocks. Fed chairman Ben Bernanke told the House Financial Services Committee Wednesday that there was no “preset course” for ending the stimulus and that any change would depend on how well the economy is doing.

Investors have worried that the central bank might reduce its stimulus before the economy was strong enough. Bernanke repeated the comments to the Senate Banking Committee Thursday.

The Dow Jones industrial average rose 78.02 points, or 0.5 percent, to 15,548.54. The Dow’s gains were led by IBM and UnitedHealth Group, which reported better earnings than Wall Street analysts were expecting.

The Nasdaq composite edged up 1.28 points, just 0.04 percent, to 3,611.28. The Nasdaq was held back by weak earnings reports from several major technology companies.

eBay fell $3.86, or 6.7 percent, to $53.52 after its CEO, John Donahoe, said late Wednesday that economic weakness in Europe and Korea will “continue to be a challenge” in the second half of the year.

Intel fell 91 cents, or 3.8 percent, to $23.24 after the world’s largest maker of computer chips predicted flat sales amid a decline in PC sales. The company’s earnings and revenue fell in the second quarter.

The weak results are in line with what’s expected to be a weak second-quarter earnings season for the U.S. technology industry. Profit growth is expected to contract from a year ago.

Companies in the S&P 500 are expected to report profit growth of 3.7 percent for the quarter.

The S&P 500 has advanced for nine of the last 10 months. During that period the only significant setback came between May 21 and June 24, when the index fell 5 percent on concern the Fed was set to pull back on its stimulus. The market’s unrelenting march higher is starting to concern some investors.

Among other stocks making big moves.