Community Tears and Dance Greet Camper on His Return
Community 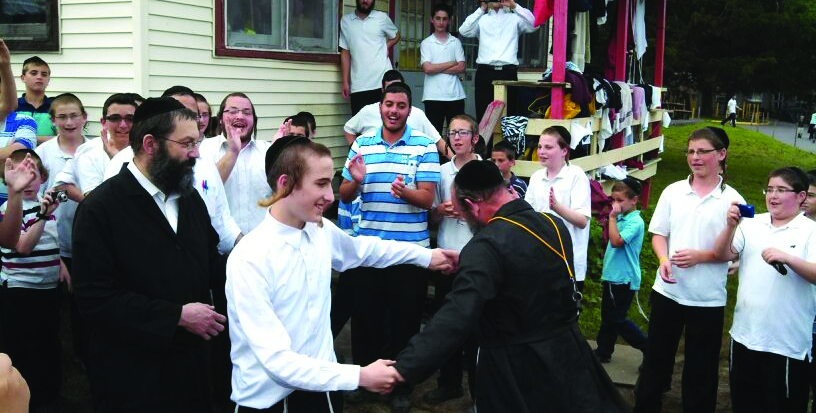 It was an unplanned moment in a highly scripted camp.

As faculty and campers saw Yechiel Mandel, who had been in cardiac arrest just a week before after a long period of time spent underwater, coming out of the car Sunday upon his return to Camp Karlin Stolin, the song “Chasdei Hashem ki lo samnu” broke out. People joined hands, as others wept openly off to the side.

It was a miracle, Dovid Pilchick, the camp administrator who had accompanied Mandel to the hospital after he was pulled unconscious from the pool, told Hamodia.

“They just couldn’t hold themselves back and they just started dancing,” he said. “People who were not emotional at all were standing on the side crying. I never saw such a thing like this.”

A gala seudas hodaah is planned for Thursday, where the township of Lloyd sheriff, along with members of the state police and Hatzolah, and the camp paramedic and lifeguards, will be honored.

Mandel, 14, was “almost lifeless” when he was taken from the pool on Friday, July 5, Rabbi Pilchick said. Yossi Simon and Chaim Stefansky, two of the camp’s four emergency medical technicians, brought Mandel to the poolside where he was already in cardiac arrest. Moshe Henig, the paramedic, performed CPR. Local Lloyd Township and state police were there within three minutes.

But by the following Monday, he was released from the hospital to his home in Brooklyn healthy and in a good mood. His only wish? “When can I go back to camp? I want to go back to the pool.”

By the time Mandel arrived to camp at about 6:00 p.m. Sunday, his bunk was decorated was banners and his friends couldn’t wait to see him back.

“They just couldn’t hold themselves in seeing him on his own two feet in his healthy condition,” Rabbi Pilchick said.