General Stocks Edge Up as Bernanke Reassures on Stimulus 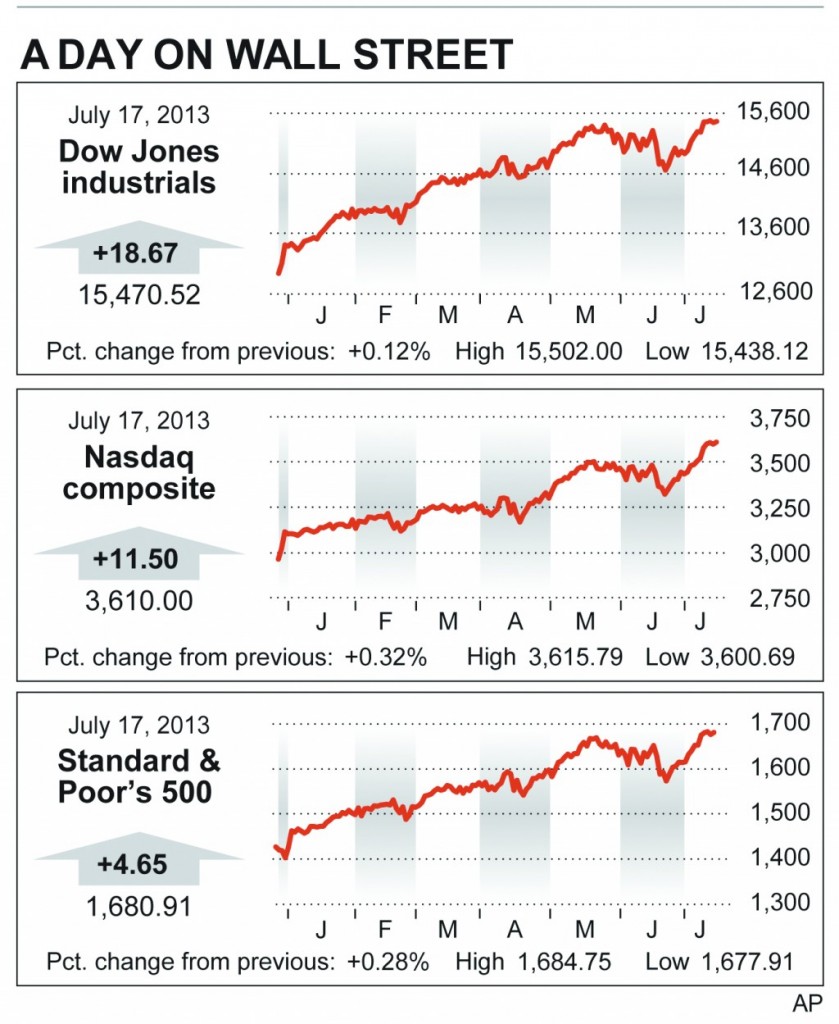 Bernanke said that the U.S. central bank had no firm timetable for cutting back on its bond purchases. The Fed would consider reducing its stimulus program if the economy improves, but Bernanke emphasized in his testimony to Congress that the reductions were “by no means on a preset course.”

The central bank is currently buying $85 billion of bonds a month to keep interest rates low and encourage borrowing. Concerns that the Fed was poised to start easing back on that stimulus before the economy had recovered sufficiently caused the stock market to pull back in June.

The Dow was held back by American Express and Caterpillar. The credit card company’s stock slumped $1.47, or 1.9 percent, to $76.80 after European regulators proposed to cap the lucrative processing fees the card company imposes.

Caterpillar fell $1.50, or 1.7 percent, to $86.67 after prominent short-seller Jim Chanos said he was shorting the stock because it was exposed to a slump in the mining industry. In a presentation at the ‘Delivering Alpha’ conference, broadcast by CNBC, Chanos said Caterpillar was “tied to the wrong products, at the wrong time.”

Bernanke’s comments had a stronger impact on the Treasury market than on the stock market.

The yield on the 10-year Treasury note fell to 2.49 percent from 2.53 percent late Tuesday as investors bought U.S. government bonds. The yield has been declining since July 5, when it surged to 2.74 percent after the government reported that hiring was strong in June.

If Treasury yields climb too fast, it worries stock investors because of the impact that rising interest rates have on the wider economy. For example, higher mortgage rates, which are linked to Treasury yields, would slow demand for homes.

The stock market has climbed back to record levels in July following its brief slump in June, when the S&P 500 logged its first monthly decline since October on concern that the Federal Reserve would ease back on its economic stimulus too quickly. The S&P 500 has gained 4.7 percent in July after falling 1.5 percent in June. It climbed to a record 1,682 on Monday.

The index is up 17.9 percent this year, and stocks could head higher still as the economy improves in the second half of the year, says Rob Lutts, chief investment officer at Cabot Money Management.

Investors are also keeping an eye on company earnings during one of the busiest weeks for second-quarter profit reports.

Bank of America rose 39 cents, or 2.8 percent, to $14.31 after it reported surging earnings for the period, helped by cost-cutting and investment banking gains. Bank of New York Mellon gained 57 cents, or 1.9 percent, to $30.92, after the bank posted earnings that beat analysts’ expectations. Net income surged in the second quarter as market conditions improved and it collected more fees for managing investments.