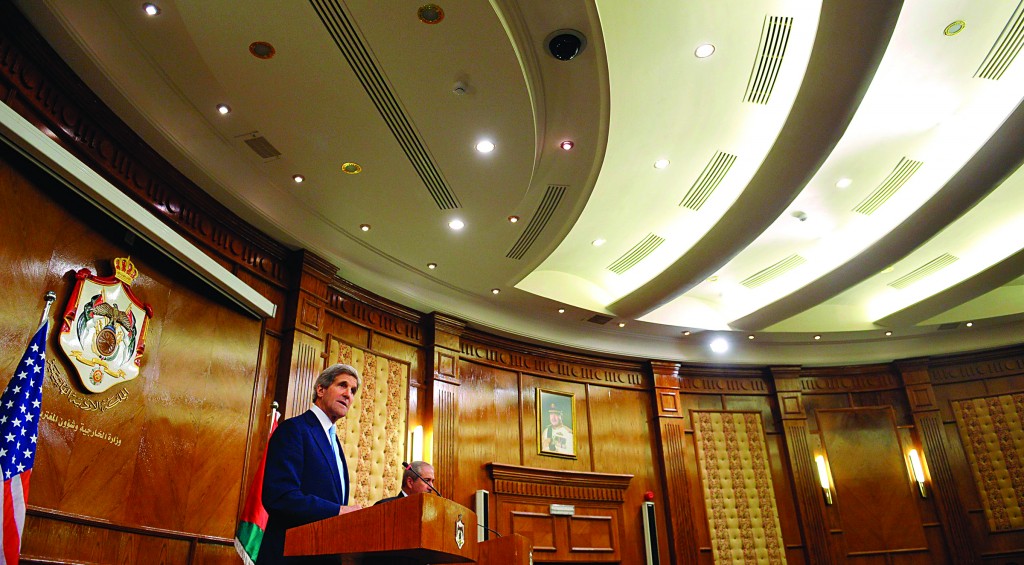 Secretary of State John Kerry stepped up pressure on Israel and the Palestinians to resume peace talks, urging them to accept the 2002 Arab League initiative as a framework for negotiations.

The League proposal for a return to the 1967 lines with swaps and a “just solution” for Palestinian refugees, was urged on Israel by Kerry from Amman on Thursday after meeting with Arab officials and PA Authority President Mahmoud Abbas.

“Israel needs to look hard at this initiative, which promises Israel peace with 22 Arab nations and 35 Muslim nations — a total of 57 nations that are standing and waiting for the possibility of making peace with Israel,” he said.

Israeli officials noted that Israel never rejected the plan, and that Prime Minister Binyamin Netanyahu has said consistently that if the initiative is the basis of discussion, it is acceptable, but if it is considered a take-it-or-leave-it dictate, it is unacceptable.

The Palestinians have not accepted the proposal yet, either.

Kerry’s meeting with Abbas in the Jordanian capital was to be followed, according to a Palestinian official, by consultation with other PLO leaders on Thursday ahead of a decision on whether they should resume negotiations with Israel.

The Arab League endorsed Kerry’s peace efforts, saying in a statement carried on the Jordanian news agency that it hoped this could lead to a two-state solution.