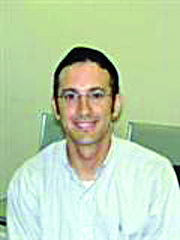 When Menachem Krausz was found after getting lost last week Sunday, the 2-year-old’s family was too overwhelmed to notice that the stranger who had found him had quietly slipped away.

So the next day, an uncle called Hamodia for help in tracking down the man they described as “a litvishe yungerman without a beard who was driving a black SUV,” who they now call “Menachem’s savior.”

An article with a telephone number appeared in the Wednesday, July 10 edition of Hamodia, appealing to the heroic knight in shining armor to ride forth with closure.

On Sunday, hundreds of miles away, in Boca Raton, Fla., a shul member approached Dr. Boruch Galbut asking him if he had seen the Hamodia article.

No, he replied. Please send me the link.

Dr. Galbut, a cardiologist affiliated with JFK Medical Center in Atlantis, Fla., and Bethesda Hospital East, had told several of his Floridian friends of the strange escapade during his past week’s visit to his children’s camp for visiting day.

Dr. Galbut was in New York with his wife to see their children, Shoshana, 16, and Keren, 12, at Camp Sternberg, and Sender, 14, at Camp Avraham Chaim Heller. They then drove together to Swan Lake for a barbeque with an uncle.

Seeing they were missing some items, the uncle asked Dr. Galbut if he could drive down the road to a supermarket and make a purchase for him. It is straight down the road, he emphasized to the Galbuts, who were unfamiliar with the area.

The Galbuts got into the car and drove toward Swan Lake. As they were passing the Skvere boys’ camp, Dr. Galbut noticed a commotion. He stopped his car and asked somebody what was going on.

Menachem, a Boro Park boy who had gone with his parents to visit his brothers in Camp Toldos Yaakov Yosef, was missing and the family was growing frantic.

The initial search rapidly turned into a massive hunt, as the panicked family called for additional resources. Local and state police, Shomrim and Hatzolah from three different patrols, as well as dozens of volunteers from summer dwellers in the area, set out to comb the vicinity. Hatzolah of Boro Park, Williamsburg and Staten Island set up a joint command center, and they distributed a map of the area, along with pictures of the missing boy.

The search parties had not thought of searching the woods surrounding the camp, since police estimated that even an adult would have a hard time getting into it. Dr. Galbut gunned his engine and went down the road, reaching the bridge that crossed Swan Lake.

At that point he was ready to give up. But noticing the sinking sun, he told his wife that he could not quit at this time.

So he made a U-turn, intending to go back to the camp, when he noticed a small figure emerging from the woods.

“Just at that time, Menachem decided to make his appearance,” Mrs. Krausz told Hamodia on Wednesday.

Menachem later said the reason he left was since he had seen the boys sliding down a hill. He also wanted to go on the “sliding pond,” he said.

“I had fun!” Menachem said.

After reading the story in Hamodia Sunday, Dr. Galbut called the number which accompanied the article and left a message. But due to Tishah B’Av, the Krauszes did not hear it until Wednesday.

“You were the shadchan!” Mrs. Krausz exclaimed when she was reached by Hamodia later Wednesday.

To hear Mrs. Krausz tell the story, Dr. Galbut came all the way from Florida to save her son.

“He told me, this is a teachable moment for his daughters, what a Jew doesn’t do for a Jew,” she said.

“This was a good chinuch for my daughters,” he said.

After he returned the child to the relieved parents, he said, he left quickly because his family was waiting for him. And he never thought he would hear of the tale again.

“When we left we didn’t know the name of the boy,” he said. “My kids were like, wow, I want to know what happened to him.”

Both the Krauszes and Galbuts say they intend to keep in touch in the future.

“I told the mother this morning that I think he’ll do great things for Klal Yisrael,” Dr. Galbut said.

Mrs. Krausz said that she is saving his number. “I put it into my cell phone as Menachem’s savior,” she said.

To which Dr. Galbut responded, laughing, “I think we both know who his real Savior is.”