Can We Spiritually Afford a Summer Bein Hazmanim? 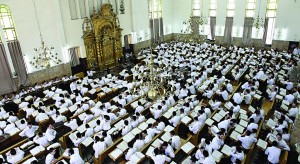 Sharing a dormitory room with two other American bachurim known for their exemplary kindness meant that I had a most enjoyable experience as a bachur studying in a yeshivah in Yerushalayim. It also meant that since our yeshivah was within walking distance of the Kosel, as well as numerous Chassidic courts, almost every Shabbos, one or both of them gave up his bed to host a bachur from a more distant yeshivah.

In the process, I forged friendships and got to hear first-hand reports of various other yeshivos throughout Eretz Yisrael.

The conversations largely revolved around our guests’ relationships with the Mashgichim in their respective yeshivos. Some complained bitterly of policies they felt were too strict.

Other guests had very different grievances. They were upset that they had no relationship at all with the Mashgiach, or with anyone else on the staff, for that matter. They conceded that in a very large yeshivah, it was extremely difficult, if not impossible, for even an experienced mechanech to form a personal bond with each talmid — but understanding this reality did not mitigate their feelings of loneliness and not belonging.

The approach of these yeshivos was easygoing — too easygoing for these bachurim. Without any discipline or recognition, they felt powerless against the distractions that were pulling them away from their gemaros.

The common complaint seemed to be the issue of bein hazmanim.

While my own yeshivah only gave off in Nisan and Tishrei, several of our regular Shabbos guests attended yeshivos that closed down for three entire weeks after Tishah B’Av.

Unlike the Israelis — who faced challenges of their own — the Americans had no home to go to. Then — as now —various options were available for these students during this bein hazmanim period. Some were frightfully expensive, unaffordable for parents who were already paying more than they could afford to send their sons to learn in Eretz Yisrael. The cheaper options were, to put it mildly, “high-risk.” Lacking any real supervision, they usually consisted of groups of boys traveling the country looking for a good time. My friends faced a grim choice: join a tiyul that included significant spiritual and physical dangers, or just spend three lonely weeks wandering about locally, trying to figure out how to get the hours to pass quickly.

Some of these bachurim were committed to their learning sedarim the rest of the year, but left without chavrusas they found themselves unable to concentrate on their studies during bein hazmanim.

More than 20 years have passed since those conversations in the dimly lit dorm room late on Friday nights, but my heart still aches for those bachurim, as well as the many youngsters who face these dilemmas today.

When I later returned to the States, I discovered that many of those attending American yeshivos face the same dilemma. While there are some organized, supervised trips available, they are quite expensive. Far too many bachurim choose to stay home, turning night into day and then sleeping by day as they desperately search for something meaningful to do.

I have long been baffled about the purpose of bein hazmanim in the summer.

During the months of Tishrei and Nisan, there is enough going on in the average Jewish home to keep students occupied or at least preoccupied. In Tishrei, there is building the sukkah and choosing the arbaah minim. In Nisan, there is Pesach cleaning, shopping and kashering. But during the hot summer days, there is precious little to do.

Gedolei Yisrael have repeatedly instructed that bachurim should use bein hazmanim to review their learning and recharge their batteries while staying firmly connected to Torah.

Wouldn’t it be far easier for this to be accomplished within the framework of the yeshivah system? Bachurim — like all of us — thrive on structure. Perhaps it is worthwhile to consider continuing regular morning seder and then, in the afternoon hours, the bachurim can alternate between supervised outdoor excursions and inspiring guest lecturers.

I have been told that at least one major yeshivah in Eretz Yisrael has already implemented such a program. Halevai, other yeshivos, especially here in the United States, would do the same.

This article appeared in print on page 38 of the July 18th, 2013 edition of Hamodia.