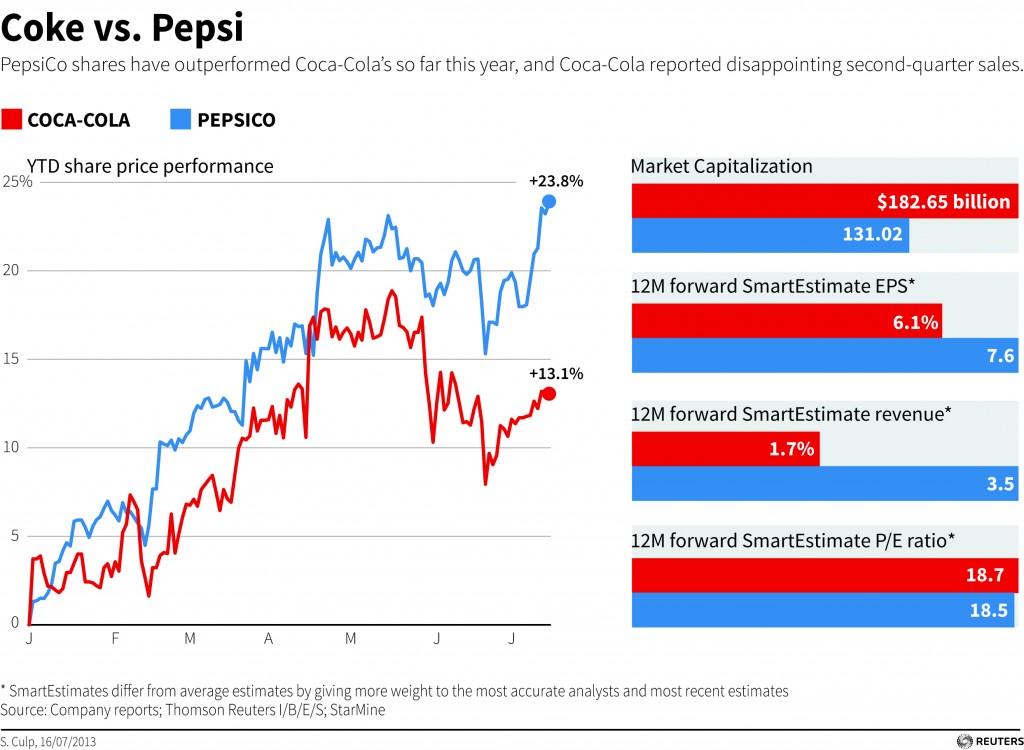 A string of lackluster earnings reports from companies including Coca-Cola and Charles Schwab ended an eight-day winning streak for the Standard & Poor’s 500 index.

Coca-Cola, the world’s largest beverage maker, fell after the company said it sold less soda in its home market of North America. Retail brokerage Charles Schwab’s second-quarter earnings fell short of what analysts were expecting. Marathon Petroleum fell after the fuel refiner forecast weak earnings and said its business was being hurt by renewable fuels laws.

Eight of the 10 industry groups in the S&P 500 fell. The declines were led by materials companies. Phone companies and technology companies were the two groups that gained.

Coke dropped 78 cents, or 1.9 percent, to $40.23 after the company reported that its second-quarter profit fell 4 percent. Charles Schwab fell 71 cents, or 3.3 percent, to $21 after its earnings came in short of analysts’ expectations as expenses rose and its interest margins fell. Marathon Petroleum fell $3.17, or 4.3 percent, to $69.93.

Overall S&P 500 earnings are expected to grow by 3.4 percent in the second quarter from the same period a year ago, according to data from S&P Capital IQ. The rate of earnings growth is predicted to rise in the third and fourth quarters, reaching 11.6 percent in the final three months of the year.

The stock market has climbed back to record levels following a brief slump in June, when the S&P 500 logged its first monthly decline since October on concern that the Federal Reserve would ease back on its economic stimulus too quickly. The S&P 500 gained for eight straight trading sessions through Monday, its longest winning streak since January. Had the index ended higher Tuesday, it would have marked the longest series of advances since 2004.

The index is up 4.4 percent in July, putting it on track to log its biggest monthly gain since January, when it rose 5 percent.

Stocks got a boost last week when Bernanke said the central bank would not ease its stimulus before the economy was ready. Investors will be listening to his comments again this week for more clues about the central bank’s outlook for the economy. The Fed chairman will give his semi-annual testimony to Congress on Wednesday.

That testimony may have more impact on the stock market this week than any earnings reports, said Wells Fargo’s Wren.

Esther George, the president of Kansas City branch of the Fed, and a voting member of the committee that sets the Fed’s monetary policy, said Tuesday that the central bank should cut back on its stimulus as the labor market begins to recover. The central bank is currently buying $85 billion of bonds a month to keep interest rates low and to encourage borrowing and hiring.

“It is time to adjust those purchases,” George said in an interview on Fox Business News. “Sooner is appropriate … because we have a long way to go if we are going to do this in a gradual and a systematic way.”

In government bond trading, the yield on the 10-year Treasury note was unchanged from 2.54 percent Monday. The yield, which moves inversely to its price, has fallen since surging as high as 2.74 percent July 5.