Investigation Under Way Into 787 Dreamliner Fire 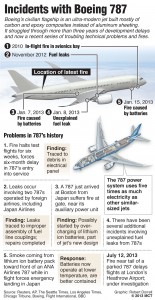 A British governmental body said Saturday it is leading an investigation into a fire aboard an empty Dreamliner aircraft at Heathrow Airport, an incident that has sparked renewed concern about Boeing’s newest plane.

The Air Accidents Investigation Branch, part of the Department of Transport, said the Ethiopian Airlines 787 plane was moved to a secure hangar at Heathrow early Saturday so that an investigative team can try to find out what caused Friday’s fire.

The incident did not cause any injuries because no one was aboard the plane, but it forced runways at Heathrow, one of the world’s busiest airports, to shut down for nearly an hour. Arrivals and departures were suspended, and hundreds of passengers’ journeys were delayed.

The fire also added to investor fears about Boeing, which had to ground its fleet of 787s in January following problems with overheating lithium-ion batteries on two different planes. Boeing shares lost $5.01, or 4.7 percent, to fall to $101.87 on Friday.

The Chicago-based aviation giant said it is working with authorities to “fully understand and address” the problem. Others also involved in the investigation include the U.S. National Transportation Safety Board, the U.S. Federal Aviation Administration and Ethiopian Airlines.

A spokesman at the Air Accidents Investigation Branch declined to provide a time frame for the probe’s completion, saying only it will last “as long as it takes.”

Ethiopian Airlines, which was the first airline to resume using the 787 after the battery problem was fixed, said the aircraft in question had been parked at a remote stand at Heathrow for more than eight hours before smoke was detected.

Analysts have speculated that Friday’s fire was not related to the plane’s batteries, because photos showed that the section of the plane damaged by the fire — the rear roof — was far away from the battery compartment.

Separately, another 787, flown by Thomson Airways, had to return to Britain’s Manchester Airport on Friday because of an unspecified mechanical issue.

There were few details about the severity of that incident. Thomson said the jet, bound for an airport in Sanford, Florida, near Orlando, had returned to Manchester “as a precautionary measure.” All passengers disembarked safely.