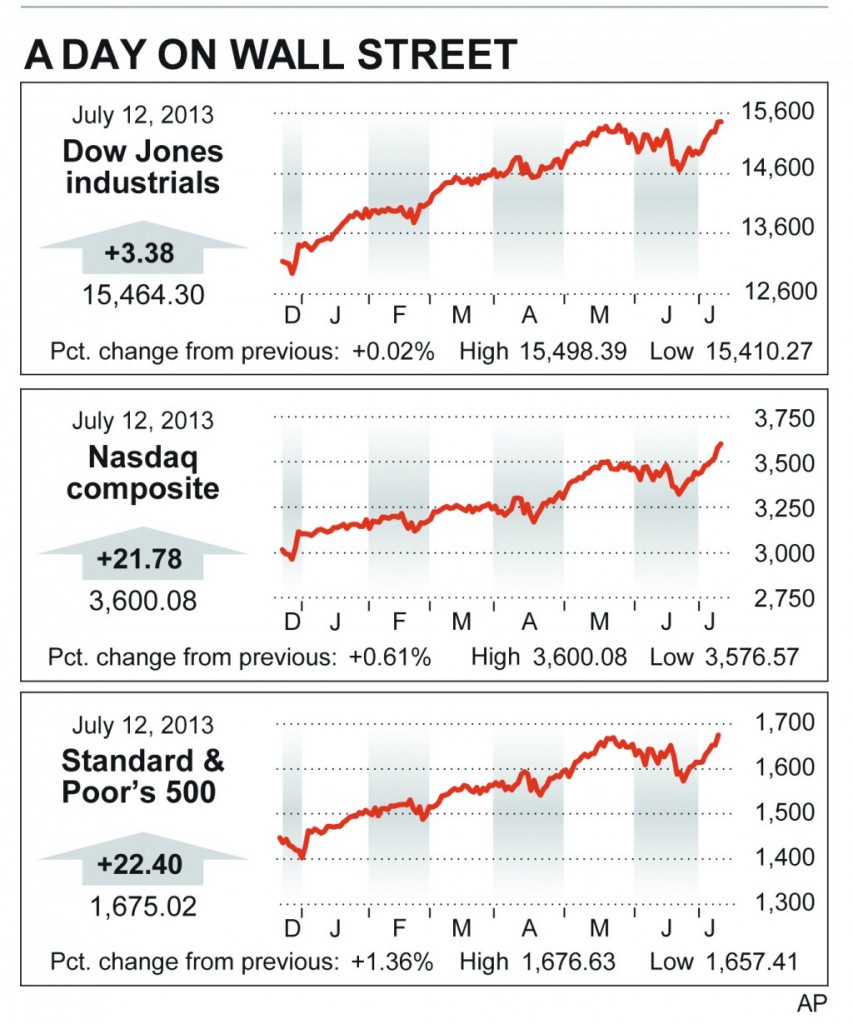 It was another record day on Wall Street — barely.

After spending most of Friday flat or down, stocks rallied at the last minute and closed slightly higher, just enough to post new record highs for the Dow Jones industrial average and the Standard & Poor’s 500 index.

The gains were tiny. And the new record doesn’t mean much for investors, who hardly have any more money now than they did a day earlier. But it is a sign that investors believe the market’s rally this year may not be over yet.

The S&P 500 has closed higher seven days in a row. The last time it did that was in March.

Investors had to look past a pessimistic outlook from UPS, which said it was seeing a slowdown in U.S. industry. And in the afternoon, Boeing shares tanked after one of its 787s caught fire in London, reviving fears of the troubles that plane had with smoldering batteries earlier this year.

Other economic news was mixed. Profits at big banks Wells Fargo and JP Morgan came in better than expected, and that helped financial stocks. But a University of Michigan measure of consumer sentiment came in lower than expected for this month.

Investors will get a lot more information next week, when key reports on inflation and retail sales are due. That’s also when the pace of company earnings reports picks up sharply. Results are due from the remaining big banks, as well as from General Electric, Intel, Microsoft and other industry bellwethers.

All the big indexes are ahead for the week.

Stocks spent most of Friday down, but not by much. Analysts believe investors are waiting for several major earnings and economic reports next week before deciding whether the rally has further to run.

United Parcel Service sank $5.33, or 5.8 percent, to $86.12 after saying its second-quarter and full-year earnings will be less than analysts have been expecting because the company’s customers are using cheaper shipping options. UPS also said it’s seeing a slowdown in U.S. industry.

Boeing dropped after a fire on a 787 parked at Heathrow Airport, and after another 787 had to divert to a different airport. Boeing struggled earlier this year after its new 787 was grounded for more than three months because of smoldering batteries, and investors are nervous about any additional problems with the plane.

Other stocks with notable moves:

n Gap rose 34 cents, or 0.8 percent, to $45.10. Three analysts lifted their price targets after Gap posted revenue at stores open at least a year that was better than the market was expecting.

n WebMD jumped $6.86, or 25 percent, to $33.82 after the medical website operator sharply raised its forecast for its second-quarter results, citing strong demand from advertisers.

n RadioShack Corp. rose 29 cents, or 11 percent, to $2.92. Investors were spooked late Thursday after a report that it had hired financial advisers. But they appeared to be reassured after the struggling electronics retailer said it has a strong balance sheet and that the “sole focus” of its discussions with advisers is making its balance sheet stronger.

The yield has risen almost a full percentage point since early May, pushing interest rates higher for mortgages and other loans. There’s a fear that higher rates could hurt housing and business borrowing.

John Fox, director of research at Fenimore Asset Management, said housing is improving, employment is improving, and retail and auto sales are good. “Is that all just going to disappear if we have a 3.5-percent Treasury bond? I don’t think it will.”