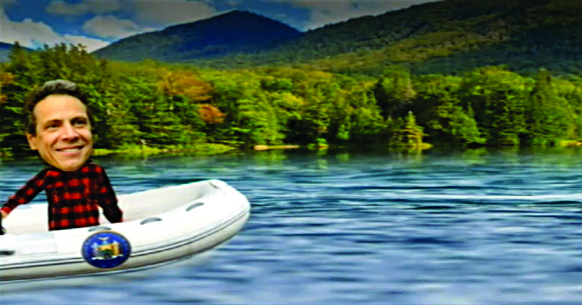 The July 22 whitewater race on the Indian River is part of the “2013 Adirondack Challenge” Cuomo announced during this year’s State of the State address. He said the two days of activities will bring international attention to the beauty and recreational opportunities of the Adirondacks and attract tourism.

Cuomo and Bloomberg will take to their rafts a day after the 15-mile Adirondack Challenge Flatwater Canoe Race on Indian Lake and the Governor’s Invitational Whitewater Race, also on the Indian River.

The governor’s office said Friday the two whitewater races will be closed to the public, but there will also be a festival Sunday in the town of Indian Lake after the canoe race. That will include “Taste N.Y.,” with food and drinks produced in the Adirondacks and elsewhere in New York, a display of artisan-created watercraft, a fly-fishing demonstration and a variety of activities for children.

There will also be an awards ceremony and showing of highlights from the whitewater racing at the town’s Byron Park.

The 6-million-acre Adirondack Park has 3,000 lakes and ponds and 30,000 miles of rivers and streams that offer fishing, canoeing, kayaking and whitewater rafting.