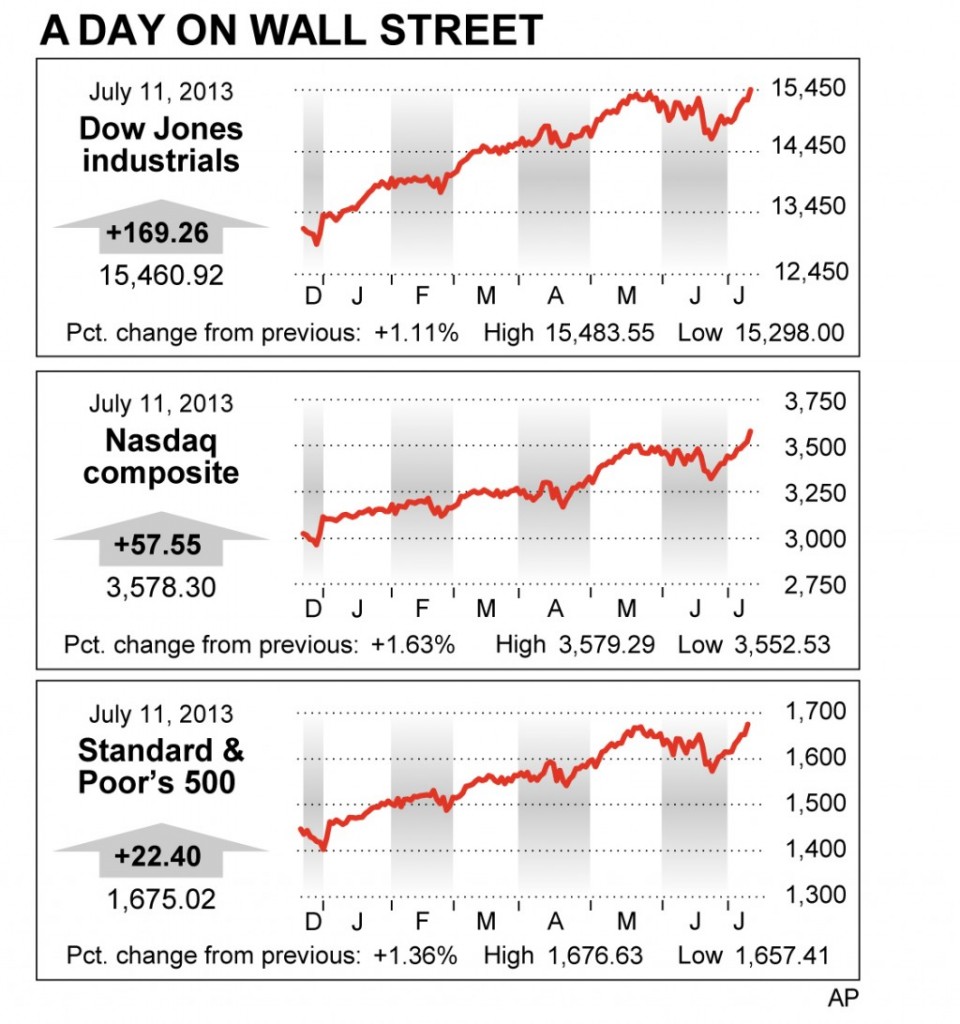 Call it the Bernanke Boost.

The stock market, which has been marching higher for a week, got extra fuel Thursday after Federal Reserve chairman Ben Bernanke said the central bank will keep supporting the economy.

The Dow Jones industrial average and Standard & Poor’s 500 surged to all-time highs. And the yield on the 10-year Treasury note continued to decline as investors bought bonds. Stocks that benefit most from a continuation of low interest rates, such as homebuilders, notched some of the biggest gains.

The chairman made the comments in a speech late Wednesday after U.S. markets had closed, saying the economy needs the Fed’s easy-money policy “for the foreseeable future.”

The U.S. economy needs help because unemployment is high, Bernanke said. His remarks seemed to ease investors’ fears that the central bank will pull back on its economic stimulus too quickly. The Fed is currently buying $85 billion a month in bonds to keep interest rates low and to encourage spending and hiring.

Stock index futures rose overnight. Stocks surged when the market opened Thursday and stayed high for the rest of the day.

“The Fed has made it unequivocally clear that they are not in any hurry to do anything,” said Alec Young, Global Equity Strategist at S&P Capital IQ. “It’s very bullish for stocks.”

In government bond trading, the yield on the 10-year note fell to 2.57 percent from 2.63 percent Wednesday. The yield was as high as 2.74 percent Friday after the government reported strong hiring in June. Many traders took that report as a signal that the Fed is likely to slow its bond purchases sooner rather than later.

The market pulled back last month after Bernanke laid out a timetable for the Fed to wind down its bond-buying program. He said the central bank would likely ease back on its monthly purchases if the economy strengthened sufficiently.

On Thursday, Advanced Micro Devices was the biggest gainer in the S&P 500 after news that the company will make chips for two big gaming devices. The company rose 47 cents, or 11.8 percent, to $4.45.

Homebuilders, which are sensitive to the outlook for interest rates, were also among top gainers.

The housing market has benefited from low interest rates because they help make mortgages cheaper.

Corporations began reporting earnings this week for the second quarter, which ended 11 days ago. S&P Capital IQ forecast that companies in the S&P 500 will report average earnings growth of 3 percent compared with the second quarter last year.

Gold is rising because the prospect of continued stimulus from the Fed could weaken the dollar and increase the risk of inflation. That, in turn, increases the appeal of gold as an alternative investment.