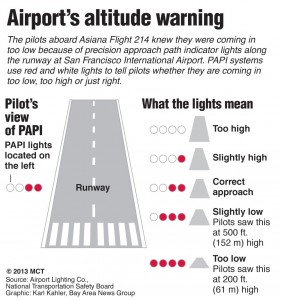 Stunned and bleeding after a Boeing 777 crashed-landed at San Francisco International Airport, hundreds of passengers staggered across the debris-strewn tarmac, some trying to help the critically injured, others desperately calling 911 and begging for more ambulances as dire minutes ticked away.

“There’s not enough medics out here,” a caller told a dispatcher in a 911 call released by the California Highway Patrol. “There is a woman out here on the street, on the runway, who is pretty much burned very severely on the head and we don’t know what to do.”

Two people died and 180 of the 307 passengers were hurt when Asiana Airlines Flight 214 slammed tail-first into a seawall Saturday at the end of the runway. The impact ripped off the back of the plane and tossed three flight attendants and their seats onto the runway.

San Francisco Fire Department spokeswoman Mindy Talmadge said Thursday that some passengers who called 911 may not have immediately seen ambulances at the scene because they were dispatched to a nearby staging area as first responders assessed who needed to be taken to the hospital.

“There is a procedure for doing it,” Talmadge said. “You don’t cause more chaos in an already chaotic situation. You don’t do that with 50 ambulances running around all over the place.”

Within 18 minutes of receiving word of the crash, five ambulances and more than a dozen other rescue vehicles were at the scene or en route, in addition to airport fire crews and crews from San Mateo County and other agencies already on the scene, Talmadge said.

“Our response was immediate,” Talmadge said. “That’s not how a real-life response is to a large-scale incident.”

Among those who walked away without serious injury were the four pilots, including Lee Gang-kuk, who was landing the big jet for his first time at the San Francisco airport, and Lee Jeong-Min, who was training him.

While the two men had years of aviation experience, this mission involved unfamiliar duties, and it was the first time they had flown together.

Hersman said the pilot trainee told investigators he was blinded by a flash of light at about 500 feet, which would have been 34 seconds before impact and the point at which the airliner began to slow and drop precipitously. She said lasers have not been ruled out. It was unclear, however, whether the flash might have played a role in the crash.

Details emerging from Asiana pilot interviews show the captains thought the airliner’s speed was being controlled by an autothrottle set for 157 mph.

Inspectors found that the autothrottle had been “armed,” or made ready for activation, Hersman said. But investigators are still determining whether it had been engaged. In the last two minutes, there was a lot of use of autopilot and autothrottle, and investigators are going to look into whether pilots made the appropriate commands and if they knew what they were doing, she said.

When the pilots realized the plane was in trouble, they both reached for the throttle. Passengers heard a loud roar as the plane revved up in a last-minute attempt to abort the landing.

Hersman cautioned against speculating about the cause of the crash.

A dozen survivors remained hospitalized Wednesday, half of them flight attendants, including three thrown from the jet.

This article appeared in print on page 3 of the July 12th, 2013 edition of Hamodia.