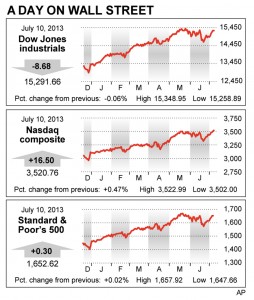 Even the release of minutes from the latest meeting of the Federal Reserve didn’t jolt stocks.

Every move the Fed has made in recent months has been analyzed. Wednesday’s minutes from the June policy meeting were no exception.

But the minutes offered no surprises. The report showed many Fed members want to see further job gains before cutting back on the central bank’s stimulus measures. It also showed some divisions among officials over when the Fed should slow that stimulus.

“I don’t think the minutes offered anything that would change (my) view of the market’s direction or the Fed’s intentions,” said Quincy Krosby, market strategist for Prudential Annuities.

The Fed has been buying $85 billion worth of bonds each month. That has helped keep interest rates at historic lows and spurred borrowing and investing.

The small gain in the S&P 500 Wednesday kept alive its winning streak. The index has now risen five days, its best streak in two months. Investors have become more confident about the economy after the strong June jobs report. The index is up 2.9 percent in July after falling 1.5 percent in June, its first monthly decline since October.

In another sign of confidence, small-company stocks continued their surge. The Russell 2000, which represents 2,000 publicly traded companies with small market valuations, rose 2.4 points, or 0.2 percent, to a record 1,020.42.

It was Bernanke’s latest effort to stress to investors that even after the Fed has begun to slow bond purchases, it will continue to stimulate the economy.

Stock index futures rose as Bernanke spoke. The S&P index futures were up eight points, or 0.5 percent, at 1,656 as of 5:40 p.m. Eastern Daylight Time.

Investors are watching earnings results for the second quarter, which ended 10 days ago. Analysts expect earnings growth to average 2.8 percent for companies in the S&P 500, according to data from S&P Capital IQ.

Family Dollar Stores was a case in point. The discount retailer said Wednesday that its quarterly earnings fell 3 percent. But the results topped analysts’ estimates, and the stock surged $4.55, or 7.1 percent, to $68.50, making it the biggest gainer in the S&P 500.

In government bond trading, the yield on the 10-year Treasury note rose to 2.68 percent from 2.64 percent late Tuesday. As recently as early May, the yield was 1.63 percent.

The price of crude oil jumped almost 3 percent to the highest level in 16 months after the U.S. government reported another steep decline in the nation’s supplies. Oil rose $2.99 to $105.71 a barrel in New York.

This article appeared in print on page 8 of the July 11th, 2013 edition of Hamodia.