Community Tragedy and Tension Envelops the Catskills Over Weekend
Community 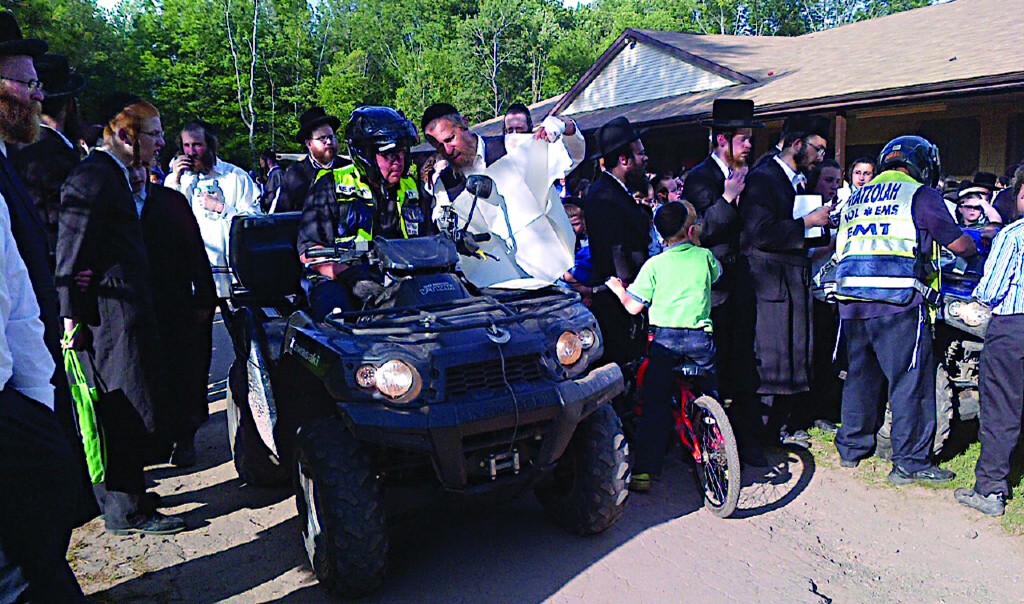 A spate of terrifying incidents struck the heart of the Jewish summer experience over the weekend, with two near-drownings and an intensive manhunt for a 2-year-old who got lost while visiting his brothers in camp.

The near tragedies underscore the safety rules publicized by a variety of organizations before the summer, as tens of thousands of children head up to the Catskills for swimming, boating and other watery sports.

Adding to the trauma are the hundreds of children who eat, sleep and play with the victim, who now must deal with the aftermath of the ordeal.

Rabbi Yaakov Klar, director of Chai Lifeline’s Project Chai who was one of the first to be called at each of the four incidents, told Hamodia that his main goal is “not to put more trauma into the children.”

Some children deal with traumatic episodes with aplomb, he said, but may panic if they see adults getting nervous. A full court press by trauma volunteers may just make things worse for them.

At the Ichud bungalow colony incident, in which a child was pulled from the water without a pulse, Rabbi Klar’s advice was to get all the children into the pool as soon as possible and for them to feel that water is safe.

“We explained to them that when they are in the safe area — meaning that they obey safety rules — it is like they are walking on the sidewalk. There are usually no accidents on the sidewalk,” he said. “Once they don’t follow safety rules, it’s like walking in the street.”

While many attribute the raised level of incidents to the Three Weeks, Rabbi Klar says he emphasizes to children that the reason is simply because people are on the road and in the pool more.

To the mysterious, clean-shaven young man driving a black SUV who found Menachem Krausz: His family wants you to call this number so that they can thank you properly.

The Krauszs’ visiting day to see their two children in Camp Toldos Yaakov Yosef, the Skvere boys’ camp in Swan Lake, on Sunday turned into a nightmare when their 2-year-old son Menachem disappeared. An initial search rapidly turned into a massive hunt, as the panicked family called for additional resources.

Local and state police, Shomrim and Hatzolah from three different patrols, as well as dozens of volunteers from summer dwellers in the area, set out to comb the vicinity. Hatzolah of Boro Park, Williamsburg and Staten Island set up a joint command center, and they distributed a map of the area, along with pictures of the missing boy.

Informed immediately of the developing emergency, Rabbi Klar of Project Chai dispatched Avrumy Greenwald, an experienced trauma volunteer, to the camp. His first act was to remove the older Krausz children from the scene. He did that by taking them out for pizza.

The Boro Park family was later to learn that Menachem had slipped out of the camp by going into the nearby forest.

“Basically, the kids went into the woods for three hours, going through gates and things even an adult cannot pass through,” Avrohom Spira, Mrs. Krausz’s brother, told Hamodia.

Menachem later told his mother that he fell and started crying. By the time he came out of the woods, he was bruised and scratched up from his ordeal.

“His mother asked him later, ‘Where were you going?’ He said, ‘I went looking for my brothers, we came to visit my brothers,’” Krausz said with a laugh. “He’s a mischievous child!”

On Tuesday, Menachem said the reason he left was that he had seen the boys sliding down a hill. He also wanted to go on the “sliding pond,” he said.

“I had fun!” Menachem said.

Meanwhile, one uncle sent a messenger to the kever of Reb Yitzchok Zev Herman, z”l, Menachem’s grandfather, who had been a gabbai for the Ribnitzer Rebbe.

Shortly afterward, about three hours into the search, a man described by the family as “a Litvishe yungerman without a beard,” drove by in a black SUV, rolled down his window and asked if he could help.

“It was very nice of him to ask,” Mr. Spira said. “It wasn’t obvious from the crowd that they were searching for someone.”

Apprised of the situation, the man headed off down the road, to a place where the search parties did not imagine Menachem would have gone, and returned shortly afterward, the target child in hand. The overwhelmed family grabbed Menachem, and in the crush, the man slipped away.

The family, which is still coming back to themselves from the story, now wants to know who he is so they can show their appreciation.

“When he came back, somebody took him out of his hands, and the bottom line is that nobody thanked him,” Mr. Spira said. “He didn’t get the credit due to him.”

When Moshe Henig came into the dining room of Camp Karlin Stolin for the seudah Friday night, the song “Chasdei Hashem ki lo samnu” erupted from the hundreds of campers. Several counselors hoisted the paramedic onto their shoulders as the camp celebrated the close call at the pool earlier that day.

Yechiel Mandel was released from the hospital to his home in Brooklyn Monday night healthy and in a good mood, long after his initially dire prognosis was downgraded.

Mandel, 14, who enjoyed long swims underwater, was spotted motionless at about 2:00 p.m. on Friday. Emergency personnel have no idea how long he was without oxygen, but a buddy call about two minutes before gives them an estimate.

Calling Mandel “an unbelievable swimmer,” Mr. Henig said that he must have not been able to get above water before his lungs began taking on water.

Yossi Simon and Chaim Stefansky, two of the camp’s four emergency medical technicians, brought Mandel to the poolside where he was already in cardiac arrest. They began performing CPR. Local Lloyd township and state police were there within three minutes.

Mandel was transferred to St. Francis Hospital in nearby Poughkeepsie, where Rabbi Yoel Gold, chaplain for Ulster County’s Sheriff’s department awaited him to assist with anything needed. As Mandel emerged from his cardiac arrest, he was transferred to Westchester Medical Center’s trauma unit.

By the time he was released Monday, he had one question: “When can I go back to camp? I want to go back to the pool.”

But Mr. Henig said that Mandel has much to be thankful for.

“Because we have such a good team over here, we saved his life,” he said. “I think this kid had a nes. The whole rescue attempt was perfect.”

Mr. Henig said that the camp has since boosted enforcement of the buddy system. But he stressed that it was important that a regular swimming schedule continue.

“You don’t want to take away swimming from kids,” he said. “This is one of the best sports for them in the summer. You just have to make it safe. And by making something safe you’re not taking away from the fun of it.”

As of Tuesday afternoon, doctors were preparing to waken Motty Yakobovich from a medically induced coma to see if any brain damage had occurred from the time he was underwater Friday.

That health situation is much improved over the 9-year-old boy’s condition on Friday, when he was dragged out of the pool at the Satmar Ichud bungalow colony in Monticello.

“When the Catskills Hatzolah took him out if the water he was lifeless, he didn’t have a pulse,” Yoeli Yakobovich, Motty’s uncle, said. “They worked on him for about 15 minutes until they revived him.”

Protocol dictated that his critical condition did not allow him to board a helicopter, so emergency personnel cancelled a previously summoned chopper and drove him instead to Catskill Regional Medical Center in nearby Harris, N.Y.

On the way, Motty got his pulse back, so he was flown on to Westchester. That night he emerged from cardiac arrest but was put on heavy sedation.

Yoeli said that Mutty’s parents are “strong,” and they are hopeful for a full recovery. They ask readers to daven for Mordechai ben Silka Sarah.