Aviation investigators put more questions to the pilots of Asiana Airlines Flight 214 on Tuesday, trying to learn what was happening in the cockpit of the Boeing 777 as the plane made a dangerously low and slow approach before a crash-landing that caused the death of two passengers.

Audio recordings indicate the crew did not realize they were in trouble until seconds before hitting the seawall at the end of the runway, a calamitous impact that broke off the tail and sent the fuselage skidding across the airfield.

Investigators have a general idea of the events that preceded the crash. But they need to hear the pilots’ accounts to understand why the jetliner went down on a clear day with no sign of mechanical trouble.

Here is what is known: Seven seconds before impact, someone in the cockpit asked for more speed after apparently noticing that the jet was flying far slower than its recommended landing speed. A few seconds later, the pilot’s yoke began to vibrate violently, an automatic low-speed warning to get the pilot’s attention. One-and-a-half seconds before impact came a command to abort the landing.

Those are the few details the NTSB has released so far from cockpit voice recordings, air traffic control details and flight data collected from the smashed jet, which slammed tail-first into the waterfront tarmac Saturday.

Airspeed was quickly emerging as the main focus of the investigation. All aircraft have minimum safe flying speeds that must be maintained or pilots risk an aerodynamic stall that robs a plane of the lift it needs to stay airborne. Below those speeds, planes become unmaneuverable. 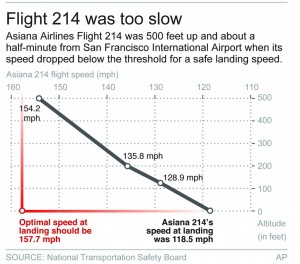 Because pilots, not the control tower, are responsible for the approach and landing, former NTSB Chairman James Hall said, cockpit communications will be key to figuring out what went wrong.

“Good communication with the flight crew as well as the flight attendants is something I’m sure they’re going to look at closely with this event,” he said Tuesday. “Who was making decisions?”

Hall was on the transportation board when a Korean Airlines Boeing 747 crashed in Guam in 1997, an accident investigators blamed in part on an authoritarian cockpit culture that made newer pilots reluctant to challenge captains.

Since then, there’s been broad training and requirements for crew resource management, a communications system or philosophy airline pilots are taught in part so that pilots who not at the controls feel free to voice any safety concerns or correct any unsafe behavior, even if it means challenging a more senior pilot or saying something that might give offense.

If any of the Asiana pilots “saw something out of parameters for safe landing,” they were obligated to speak up, said Cass Howell, an associate dean at the Embry-Riddle Aeronautical University in Daytona Beach, Fla.

“There are dozens and dozens of accidents that were preventable had someone been able to speak up when they should have, but they were reluctant to do so for any number of reasons, including looking stupid or offending the captain,” said Howell, a former Marine Corps pilot.

There’s been no indication, from verbal calls or mechanical issues, that an emergency was ever declared by pilots, who included a captain who was training on the 777 and landing one in San Francisco for the first time. While four pilots were aboard, it is not clear if all four were in the cockpit when they landed.

Hersman said she hoped to provide more details from the interviews during a news briefing scheduled for Tuesday afternoon. 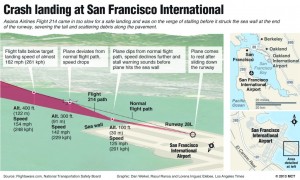 It’s unlikely there was a lot of chatter as the plane came in. The FAA’s “sterile cockpit” rules require pilots to refrain from any unnecessary conversation while the plane is below 10,000 feet so that their attention is focused on take off or landing. Conversation is supposed to be limited to safely completing the task at hand.

In addition, authorities were reviewing the initial rescue efforts after fire officials acknowledged that one of their trucks might have run over one of the two Chinese teenagers killed in the crash. The students, Wang Linjia and Ye Mengyuan, were part of a larger group headed for a summer camp with dozens of classmates.

Asiana President Yoon Young-doo arrived in San Francisco from South Korea Tuesday morning, fighting his way through a pack of journalists outside customs.

He said he will look at the efforts of airline employees to help injured passengers and their family members, visit with the NTSB and other organizations to apologize for the crash and try to meet injured passengers.

Yoon said he can’t meet with the pilots because no outside contact with them is allowed until the investigation is complete.

Lee Jeong-min had been named a training pilot on the flight because he was among the top 25 percent of Asiana pilots, Yoon said. Lee Gang-guk had logged nearly 10,000 hours operating other planes but had only 43 hours in the 777, a plane he still was getting used to flying, said spokeswoman Lee Hyomin.

More than 180 people aboard the plane went to hospitals with injuries. But remarkably, more than a third didn’t even require hospitalization.

The flight originated in Shanghai, China, and stopped over in Seoul, South Korea, before making the nearly 11-hour trip to San Francisco.

This article appeared in print on page 8 of the July 10th, 2013 edition of Hamodia.