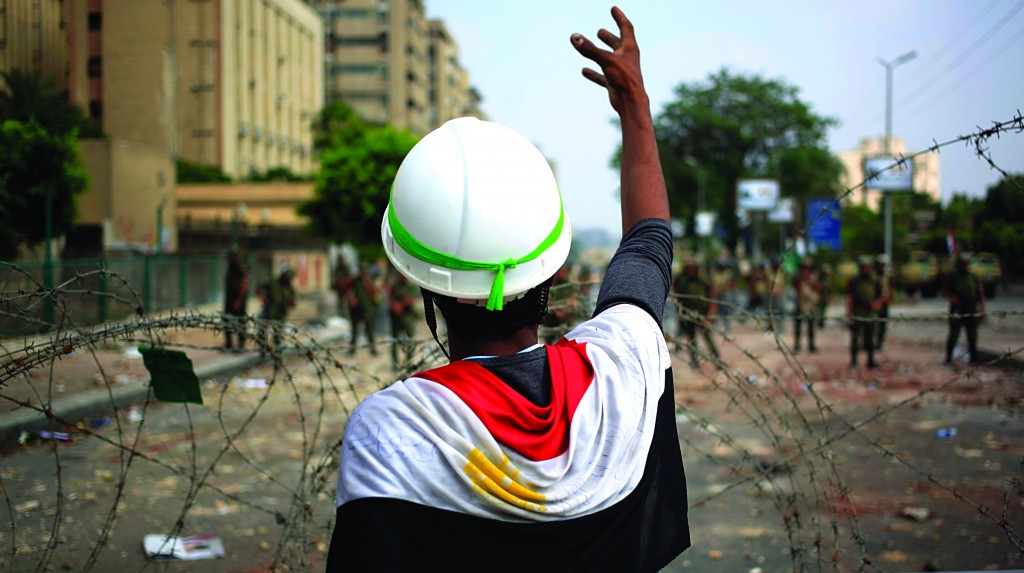 Egypt’s interim president named an economist as prime minister Tuesday, ending days of deadlock as the head of the military pressured political factions to speed along the process, warning them that “maneuvering” must not hold up the transition toward new elections after the ouster of President Mohammed Morsi.

The appointment of Hazem Beblawi, along with the setting of a swift timetable for parliamentary and presidential elections early next year, underlined the military-backed leadership’s determination to push ahead with their transition plans in the face of Islamist protests demanding the reinstatement of Morsi, Egypt’s first elected president.

The new leadership got a boost Tuesday from Arab allies in the Gulf. Saudi Arabia and the United Arab Emirates, both opponents of Morsi’s Muslim Brotherhood, celebrated his ouster by showering the cash-strapped Egyptian government with promises of $8 billion worth of cash grants, loans and badly needed gas and oil.

In doing so, they are effectively stepping in for Morsi’s Gulf patron, Qatar, a close ally of the Brotherhood that gave his government several billion in aid. During Morsi’s year in office, he and his officials toured multiple countries seeking cash to prop up rapidly draining foreign currency reserves and plug mounting deficits — at times getting a cold shoulder.

The developments underlined the multiple pressures on the new leadership even with the country still in turmoil after what Morsi’s supporters have called a coup against democracy.

The military faces calls, from the United States and Western allies in particular, to show that civilians are in charge and Egypt is on a path toward a new democratically based leadership. The nascent government will soon face demands it tackle economic woes that mounted during Morsi’s year in office, including fuel shortages, electricity cut-offs and inflation.

And there are signs of discontent over the transition plan among those participating in the military-backed political process.

The secular, revolutionary youth movement Tamarod, which organized last week’s massive protests against Morsi, criticized the transition plan Tuesday, in part because it gives too much power to the interim president, Adly Mansour. An Islamist party was unhappy that appointed panels — not elected ones — will amend the constitution.

At the same time, the country is deeply polarized, raising the threat of violence, particularly after more than 50 Morsi supporters were killed by security forces in clashes early Monday. The Brotherhood and Islamist allies say they are under siege by a crackdown from the military that has jailed five of their top leaders and shut down their media outlets.

The Brotherhood on Tuesday rejected the transition plan, as tens of thousands of its supporters massed for another day in a rally outside a Cairo mosque where they have vowed to stay until Morsi is restored. The crowds waved signs of the ousted leader and brought in coffins draped with Egyptian flags representing the slain protesters.

“This new declaration affirms that those who carried out the coup, the dictator generals, don’t respect the will of the people,” the Brotherhood said of the transition timetable in a statement. “These are all rejected and void measures.”

Still, there was not the huge nationwide turnout Brotherhood leaders had called for in the wake of the killings. Also, for the first time since even before the June 30 protests began, Cairo’s Tahrir Square — where Morsi’s opponents were centered — was largely without crowds.

That could in part reflect the fact that people are starting to prepare for the start of the Islamic period of Ramadan on Wednesday, when Muslims will begin 30 days of fasting from sunrise to sunset. But it is not clear if the month will significantly calm the street. The fast cuts down on activity during the day, but the street rallies have been largely nocturnal affairs anyway. The Islamist camp will likely use the religious occasion to rally its base.

The interim president called for a reconciliation process called “One People” to begin in Ramadan. It called for parties and movements to hold meetings. There was no sign the Brotherhood and its allies would attend, much like Morsi’s opponents rejected his calls for dialogue, which were dismissed as empty gestures.

In an effort at outreach, the interim president’s spokesman Ahmed el-Musalamani said that posts in the new Cabinet would be offered to the Islamist camp — including to the Brotherhood’s Freedom and Justice Party and the Salafi Al-Nour Party. He spoke to Egypt’s privately owned CBC media channel in remarks also carried by the state news agency.

The statement by military chief Gen. Abdel-Fattah el-Sissi against political maneuvering underlined how the military — while it says it is staying out of politics — remains a powerful presence in a transition ostensibly being led by Mansour and a loose coalition of political groupings that backed the army’s removal of Morsi.

“The people and, behind it, the armed forces don’t want anyone to stray from the right path or deviate from the boundaries of safety and security, driven by selfishness or … zealousness,” the military said.

A spokesman of the interim president announced the appointment of el-Bebawi as prime minister and of pro-democracy leader Mohamed ElBaradei as vice president. El-Bebawi is to start forming a Cabinet on Wednesday.

The naming of a prime minister had been held up for days as the sole Islamist faction among them, the ultraconservative Al-Nour Party, blocked candidates from secular, liberal and leftist factions. Those factions have been determined to have one of their own in the post.

Last week, Al-Nour blocked ElBaradei from becoming prime minister then objected to someone his close allies put forward as a compromise. It insisted it wanted a less political figure. The moves infuriated the secular and liberal factions. ElBaradei is considered one of the strongest pro-reform figures, but many Islamists vehemently oppose him, considering him too secular.

El-Bebawi is from the liberal-secular camp — albeit a less controversial, well-known or prominent figure than ElBaradei, who will now get a vice president post. Some of ElBaradei’s supporters believe he will work to shape the government and political process from that position.

El-Beblawi, 76, served as finance minister in one of the first cabinets formed after autocrat Hosni Mubarak was ousted in 2011 and the military stepped in to rule for nearly 17 months. But he resigned in protest in October 2011 after 26 protesters, mostly Christians, were killed by troops and security forces in a crackdown on their march.

A Sorbonnne-educated economist has been a professor in several Egyptian universities and served in the United Nations for six years in the U.N. Social Economic Commission for Western Asia. After Mubarak’s fall, he was one of the founders of the Egyptian Social Democratic party, one of several secular parties in the liberal grouping National Salvation Front in which ElBaradei is a leading figure.

He called for dialogue between the new leadership and their Islamist opponents in the streets. “Everyone in Egypt must sit together at the table for dialogue to solve current political differences, stop violence and bloodshed in the street,” he told The Associated Press.

Under the timetable issued Monday, two appointed panels would draw up and approve amendments to the constitution, which would be put to a referendum within 4 1/2 months from now. Elections for a new parliament would be held within two months of that. Once the new parliament convenes, it would have a week to set a date for presidential elections.

After Monday’s bloodshed, authorities stepped up moves against Islamists.

The military accused armed Islamists of sparking Monday’s carnage by attacking the headquarters of the Republican Guard. Morsi supporters say no such attack took place and that troops attacked their sit-in nearby, opening fire on them without provocation. Along with 51 protesters, an army officer and two policemen were killed.

An Egyptian security official said 650 people were arrested, most during Monday’s violence, for allegedly trying to storm the headquarters. The official said there were Syrian and Palestinian nationals among those arrested. The official spoke on condition of anonymity because he was not authorized to talk to the press.