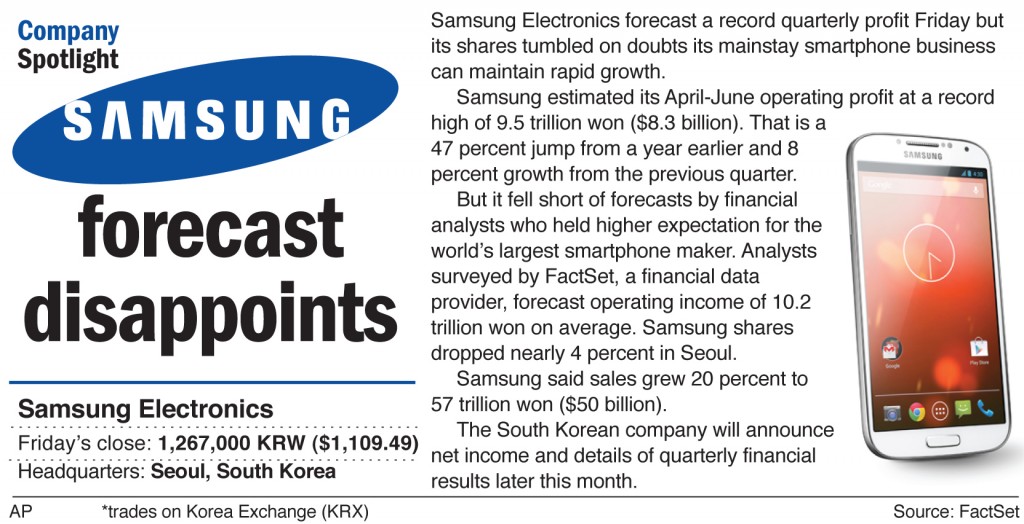 Samsung Electronics Co. on Friday estimated its April-June operating profit at a record-high of 9.5 trillion won ($8.3 billion). That is a 47 percent jump from a year earlier and 8 percent growth from the previous quarter.

But it fell short of forecasts by analysts, who held higher expectations for the world’s largest smartphone maker.

Sales of the latest iteration of Samsung’s flagship smartphone, the Galaxy S4, hit 10 million units in May, less than a month since its debut. Sales of the S4 hit the 10 million mark about 20 days faster than the previous model.

“Because of the marketing costs, the telecommunications business was probably weaker than expected,” said CW Chung, an analyst at Nomura Financial Investment in Seoul. “Semiconductor and other businesses seem to have improved from the previous quarter.”

But worries have emerged that Samsung’s profit growth will slow as developed countries, which are the biggest buyers of high-end phones, near a smartphone-saturation point.

It has become harder to impress buyers with new features in upgraded models, as most smartphones offer similar functions. Fewer “wow” factors in new smartphones mean people will not upgrade as quickly as they did when the devices were still a novelty, forcing device makers such as Samsung to spend more on splashy advertising and marketing.

Another concern is that Samsung is increasingly relying on its mobile business for growth. Samsung’s division that makes and sells mobile phones, tablet computers and cameras contributed 75 percent of its operating income in the first quarter of this year. Analysts surveyed by FactSet said 60 percent of Samsung’s second-quarter sales likely came from the mobile business.

The company will announce net income and details of quarterly financial results later this month.