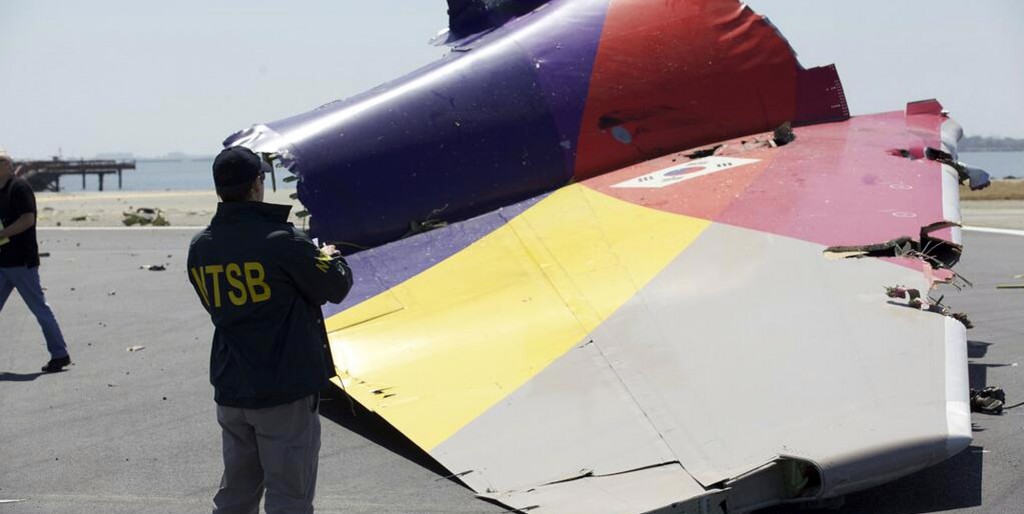 Part of the tail section of an Asiana jetliner that crashed at San Francisco International Airport was found in the waters of San Francisco Bay, and debris from the seawall was carried several hundred feet down the runway, a federal official said Monday.

National Transportation Safety Board chairwoman Deborah Hersman said the lower portion of the plane’s tail cone was found in rocks inside the seawall. A “significant piece” of the tail of the aircraft was in the water, and other plane parts were visible at low tide, she said.

Hersman said at a news conference that investigators have reviewed airport surveillance video to determine whether an emergency vehicle ran over one of two teenage girls killed in Saturday’s crash but have not been able to reach any conclusions.

She called the possibility that a girl was run over a “very serious issue.”

“I can tell you that the two fatalities were located in seats towards the rear of the aircraft. This is an area of the aircraft that was structurally significantly damaged. It’s an area where we’re seeing a lot of the critical … injuries,” Hersman said.

More than 180 people went to hospitals with injuries. But remarkably, 305 of 307 passengers and crew survived the crash and more than a third didn’t even require hospitalization. Only a small number were critically injured.

Investigators said Asiana Airlines Flight 214 was traveling “significantly below” the target speed during its approach and that the crew tried to abort the landing just before it smashed onto the runway. What they don’t yet know is whether the pilot’s inexperience with the Boeing 777 and at San Francisco’s airport played a role. Officials said the probe will also focus on whether the airport or plane’s equipment also could have malfunctioned.

Investigators said the weather was unusually fair for foggy San Francisco. The winds were mild, too. During the descent, with their throttles set to idle, the pilots never discussed having any problems with the plane or its positioning until it was too late.

Firefighters said they encountered smoke, leaking jet fuel and passengers coming down on chutes when they arrived. Lt. Christine Emmons said Monday at the news conference that she and her partner ran up a chute into the plane and found four passengers trapped in the back. The conditions in the plane were changing rapidly, with the fire coming down on rescuers and the smoke thickening as the trapped passengers were pulled out to safety, she said.

Seconds before the Boeing 777 struck down, a member of the flight crew made a call to increase the jet’s lagging speed, Hersman said Sunday. Then came a warning that the plane was about to stall and cockpit communication that the crew wanted to abort the landing and go back up for another try, she said.

At impact the plane’s airspeed was about 106 knots, well below the 137 knots it should have been going as it crossed the runway, Hersman said Monday.

The airline said Monday in Seoul that the pilot at the controls had little experience flying that type of plane and was landing one for the first time at that airport.

Asiana spokeswoman Lee Hyomin said that Lee Gang-guk, who was at the controls, had nearly 10,000 hours flying other planes but only 43 in the 777, a plane she said he still was getting used to flying. Another pilot on the flight, Lee Jeong-min, had about 12,390 hours of flying experience, including 3,220 hours on the 777, according to the Ministry of Land, Infrastructure and Transport in South Korea. Lee was the deputy pilot, tasked with helping Lee Gang-guk get accustomed to the 777, according to Asiana Airlines.

Two other pilots were aboard, with teams rotating at the controls.

Survivors and rescuers said it was nothing less than astonishing that nearly everyone survived after a frightful scene of fire burning inside the fuselage, pieces of the aircraft scattered across the runway and people fleeing for their lives.

The flight originated in Shanghai, China, and stopped over in Seoul, South Korea, before making the nearly 11-hour trip to San Francisco.