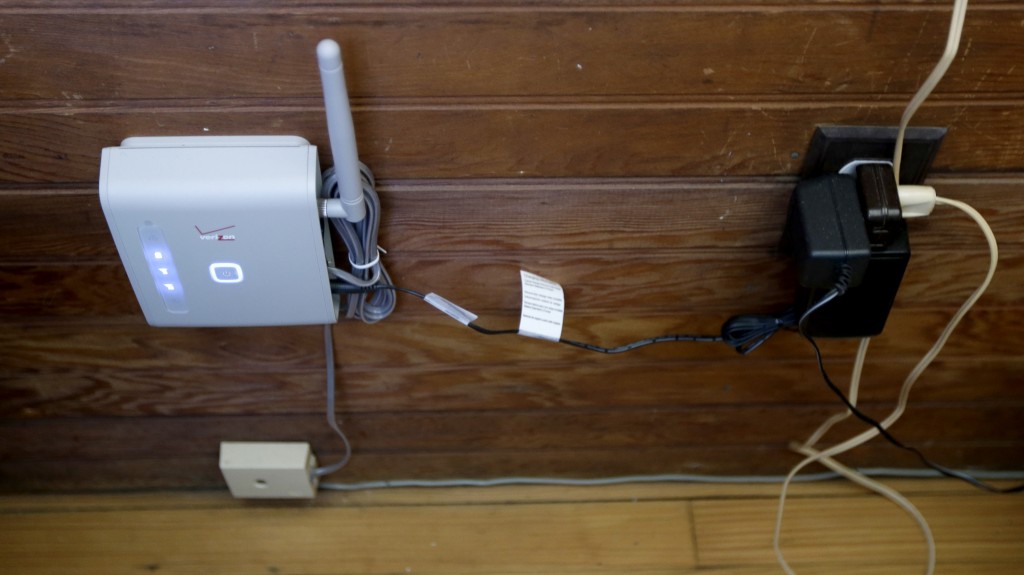 Post, 85, has a pacemaker that needs to be checked once a month by phone. But the copper wiring that once connected his home to the rest of the world is gone, and the phone company refuses to restore it.

In October 2012, Superstorm Sandy pushed the sea over Post’s neighborhood in Mantoloking, N.J., leaving hundreds of homes wrecked, and one floating in the bay. The homes on this sandy spit of land along the Jersey Shore are being rebuilt, but Verizon doesn’t want to replace washed-away lines and waterlogged underground cables. Phone lines are outdated, the company says.

Mantoloking is one of the first places in the country where the traditional phone line is going dead. For now, Verizon, the country’s second-largest landline phone company, is taking the lead by replacing phone lines with wireless alternatives. But competitors, including AT&T, have made it clear they want to follow. It’s the beginning of a technological turning point, representing the receding tide of copper-wire landlines that have been used since commercial service began in 1877.

The number of U.S. phone lines peaked at 186 million in 2000. Since then, more than 100 million copper lines have already been disconnected, according to trade group US Telecom. The lines have been supplanted by cellphones and Internet-based phone service offered by way of cable and fiber optic wiring. Just one in four U.S. households will have a copper phone line at the end of this year, according to estimates from industry trade group US Telecom. AT&T would like to turn off its network of copper land lines by the end of the decade.

For most people, the phone line’s demise will have little impact. But there are pockets of the country where copper lines are still critical for residents. As a result, state regulators and consumer advocates are increasingly concerned about how the transition will unfold.

The elderly, and people in rural areas, where cell coverage may be poor or nonexistent, will be most affected by disappearing phone lines, Feld says. “Are we going to handle this transition in a way that recognizes that we have vulnerable populations here?”

Verizon says replacing the lines just doesn’t make economic sense. When they were originally laid down, the phone was the only two-way telecommunications service available in the home, and the company could look forward to decades of use out of each line. Now, it would cost Verizon hundreds of dollars per home to rewire a neighborhood, but less than a quarter of customers are likely to sign up for phone service, and many of those drop it after a year or two.

“If we fixed the copper, there’s a good likelihood people wouldn’t even use it,” says Tom Maguire, Verizon’s senior vice president of operations support.

Verizon also wants to get out of rebuilding phone lines on the western end of New York’s Fire Island, another sliver of sand that was flooded by Sandy. The island lacks paved roads. It can only be reached by ferry, and its residents are overwhelmingly seasonal. Some of the copper lines still work, but Verizon is no longer maintaining them, to the frustration of restaurant owner Jon Randazzo.

“Really, what they’re doing is abandoning us,” says Randazzo, 30.

There’s no cable service on Fire Island, making it more dependent on Verizon than Mantoloking, where residents can get phone and internet service from Comcast by cable. The surviving copper phone lines on Fire Island often double as DSL, or digital subscriber line, internet connections. As a result, Randazzo’s restaurant, The Landing at Ocean Beach, lost Verizon internet service for a weekend last month, leaving it without a way to process credit cards. The line started working again after four days, but he’s afraid it will go out again for good.

“I had to have my waiters write down the creditcard number, the expiration number and the CVV (security) code. It took me over three and a half hours to process all my credit cards on Saturday. That’s pretty ridiculous,” Randazzo says.

Verizon provided service to about 2,700 lines on western Fire Island before the storm. But even then, 80 percent of calls to and from the island were wireless. Now, few of the lines work, but the cellular service is fine.

New York state regulators have given Verizon provisional permission to consider its wireless Voice Link boxes as stand-ins for regular phone service. Verizon technicians install the four-inch square boxes with protruding antennas in homes, and connect them to the home phone wiring. The home is then linked to Verizon’s wireless network. When subscribers lift their phone handsets, they hear a dial tone.

But the box doesn’t work with remote medical monitoring devices, home alarm systems or faxes. It can’t accept collect calls, or connect callers with an operator when they dial 0. It also can’t be used with dial-up modems, credit-card machines or international calling cards.

Post’s house in Mantoloking was built 83 years ago. His wife estimates it has been connected to a phone line for 80 years. Now, to get his pacemaker checked, he heads once a month to a friend’s home in Bay Head, the next town over, which still has a copper phone line.

Most of his neighbors in Mantoloking have cable phone service from Comcast Corp. that can do most of the things Voice Link can’t. The service, for instance, could relay Post’s pacemaker information. But Post just isn’t eager to switch to the cable company. He says he doesn’t trust it. And he’s not alone. Customer perception of cable providers has historically been poor, due to service outages and annual price increases, according to surveys for the American Customer Satisfaction Index.

Verizon says just 855 of the 3,000 homes it wants to abandon in Mantoloking had traditional phone service before the storm hit.

In other areas, Verizon is replacing copper phone lines with optical fiber, which allows the company to offer cable-like services and ultrafast broadband. Water can short out and corrode copper wire, but optical fiber is made of glass and transmits light rather than electricity, so it’s far more resistant to flooding. But the cost of wiring a neighborhood with fiber optic lines can run more than $1,000 a home.

“Everybody would love for us to put in fiber, but that’s just not practical,” Maguire says.

If New York and New Jersey refuse to give permanent permission for the switch from landline to wireless phone service, Verizon could be forced to rebuild the phone network on Fire Island and in Mantoloking. Unlike cable and wireless companies, landline phone companies have regulatory obligations in most states to supply lines at a reasonable cost, to anyone who wants one. They also need federal approval to end service.

In late June, New York State Attorney General Eric Schneiderman filed an emergency petition with state regulators, to stop Verizon from replacing copper lines with alternatives in the Catskill Mountains of upstate New York. He says seasonal residents who find their phone lines don’t work at their summer homes are steered by Verizon to its Voice Link wireless product. Only if the customer forcefully refuses, will Verizon restore the copper phone line, he says. Verizon says Voice Link is just an option available to customers.

In New Jersey, state regulators are talking to Verizon about Mantoloking, but haven’t approved the landline-to-wireless switch that Verizon has already started. It could, at least in theory, deny Verizon’s application and force it to rewire copper phone lines back into the town.

In Washington, the Federal Communications Commission is looking at an application from the country’s largest landline phone company, AT&T Inc. AT&T isn’t dealing with storm damage, so it has the leisure to take a longer view. It wants to explore what a future without phone lines will look like by starting trials in yet-to-be-decided areas.

“We need kind of a process where we can figure out what we don’t know,” says Bob Quinn, one of AT&T’s top lobbyists in Washington. “The trouble is not going to be identifying the issues everybody can see. It’s going to be finding the unexpected issues that you have to conquer.”

At Public Knowledge, Feld agrees with AT&T’s deliberative approach. Among the issues that need to be looked at, he says, is whether consumer protections that apply to landline phone service should apply to whatever replaces it. For instance, if a consumer misses a monthly payment, phone companies are prohibited from cutting landline phone service right away.

“There are all kinds of state and federal rights around your phone bill … which don’t apply to these competitive alternatives,” Feld says.

The FCC put together a formal task force on the issue in December, after AT&T put in its request, and has asked the company for more details.

Sean Lev, the FCC’s general counsel, said in a blog post that “we should do everything we can to speed the way while protecting consumers, competition, and public safety.” But he also points out that most phone companies aren’t set to retire their landline equipment immediately. The equipment has been bought and paid for, and there’s no real incentive to shut down a working network. He thinks phone companies will continue to use landlines for five to 10 years, suggesting that regulators have some time to figure out how to tackle the issue.

AT&T would like to have all its landline phone equipment turned off by 2020. Verizon’s Maguire envisions a gradual phase-out, starting right now.

If a major telecommunications line fails, and there are hundreds of people connected to it, Verizon would repair it, he says. But the company wants the option to abandon the failed line and move the remaining households to Voice Link.

“If you’re one of the few people on there, and Voice Link seems to fit you, why not?” Maguire asks.