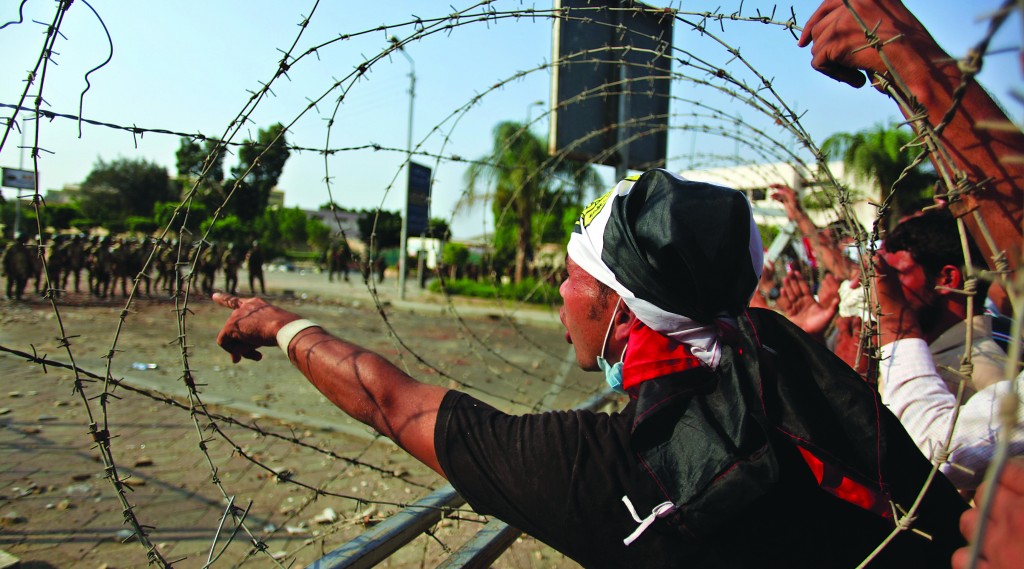 Egyptian soldiers and police clashed with Islamists protesting the military’s ouster of the president in bloodshed that left at least 51 protesters and three members of the security forces dead, officials and witnesses said, and plunged the divided country deeper into crisis with calls by the Muslim Brotherhood’s political party for all-out rebellion against the army.

The carnage outside the Republican Guard building in Cairo — where toppled president Mohammed Morsi was first held last week — marked the single biggest death toll since massive protests forced Morsi’s government from power and brought in an interim civilian administration.

Even before all the bodies were counted, there were conflicting accounts on how the violence began. The pro-Morsi protesters said the troops attacked their encampment without provocation just after they had performed dawn prayers. The military said it came under a heavy assault first by gunmen who killed an army officer and two policemen, though its account of the events left many questions unanswered.

Witnesses from outside the protest camp said troops appeared to be moving to clear the days-old sit-in and were firing tear gas when gunfire erupted. One said she believed the fire came from the protesters’ side, though others could not tell.

Whatever the spark, clashes went on for three hours, with protesters hurling stones and molotov cocktails from rooftops and gunshots ringing out. Nearby clinics run by Brotherhood supporters were swamped by wounded protesters, some with gaping, bleeding wounds. More than 400 were wounded in the mayhem, officials said.

The violence is almost certain to draw sharper battle lines between Morsi’s Muslim Brotherhood, who say the military has carried out a coup against democracy, and their opponents, who claim Morsi squandered his 2012 election victory and was wrecking democracy by bolstering his and the Brotherhood’s grip on the state.

In a move that is likely to further inflame the situation, the Freedom and Justice party, the Muslim Brotherhood’s political arm, called on Egyptians to rise up against the army. Morsi has been a longtime leader of the Brotherhood.

The party also called on the international community to stop what it called the massacres in Egypt and accused the military of pushing Egypt toward civil war, warning the country was in danger of becoming a “new Syria.”

“The only thing the military understands is force and they are trying to force people into submission,” said Marwan Mosaad, speaking at a field hospital run by Morsi’s supporters. “It is a struggle of wills and no one can predict anything.”

The bloodshed opened cracks in the grouping of movements that backed the military’s removal of Morsi.

Egypt’s top Muslim cleric warned of “civil war” and said he was going into seclusion until the violence ends — a rare and dramatic show of protest directed at both sides. He demanded a process immediately be set up for reconciliation, including the release of Brotherhood detainees.

The ultraconservative Al-Nour Party, the sole Islamist party that had joined talks on a new government and a post-Morsi political process, announced it was suspending its support for the transition plan in response to the “massacre.”

The party was struggling whether to fully bolt from the new leadership in the face of a possible revolt by its own members angry over what they see as a massacre against fellow Islamists.

Pro-reform leader Mohamed ElBaradei, a top secular and liberal figure who backed the military’s removal of Morsi, condemned the violence and called for an investigation, writing online that “peaceful transition [is] the only way.”

The escalating chaos will also further complicate Egypt’s relations with Washington and other Western allies, which had supported Morsi as the country’s first freely elected leader and now are reassessing policies toward the military-backed group that forced him out.

The White House said Monday that cutting off the more than $1 billion in annual aid to Egypt was not in the U.S.’s best interests, though it was reviewing whether the military’s moves constitute a coup — which would force such a measure under U.S. law.