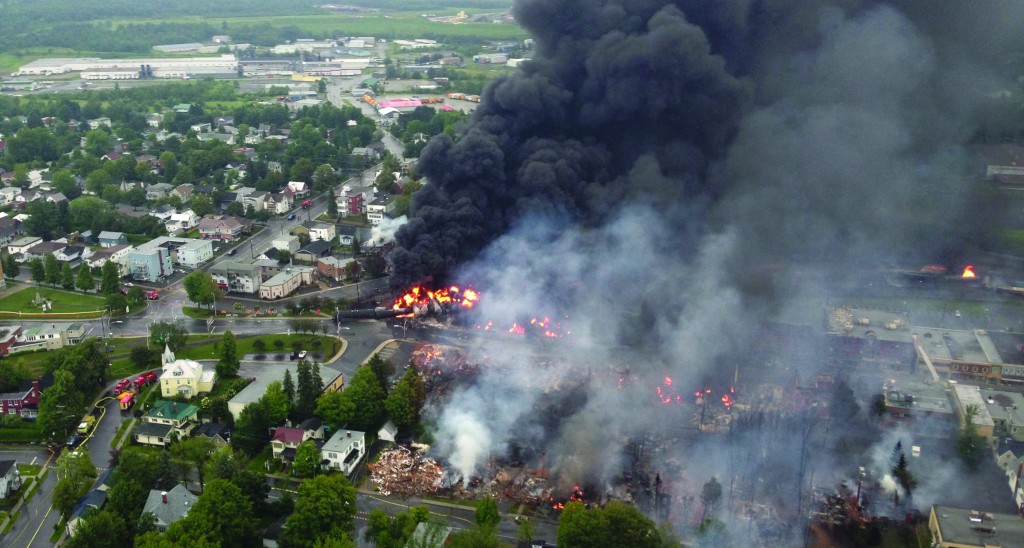 At least five people died and 40 were missing on Sunday after a runaway train carrying crude oil exploded and destroyed the center of a small Canadian town in a disaster that raises fresh questions about shipping oil by rail.

The train had been hauling crude from North Dakota to eastern Canada, and was parked, without a driver, outside town when it began rolling downhill, gathering speed and derailing on a curve at 1 a.m. on Saturday.

Each tanker carried 30,000 gallons (113,000 liters) of crude oil. Four cars caught fire and exploded in a huge orange-and-black fireball that mushroomed hundreds of feet into the air and flattened dozens of buildings.

Police said they were investigating the disaster and would talk to everyone involved.

“Every time the Surete [Quebec police] needs to investigate, we need to rule out any foul play,” spokesman Benoit Richard told reporters. “Right now we cannot say it is a criminal act. We can only say we are looking at it as if it was.”

Shipping oil on rail cars has skyrocketed in the past year as crude producers seek alternatives to pipelines that are already full to capacity. Previous accidents led to messy spills rather than life-threatening explosions.

Brunet said about 40 people were missing after the derailment early on Saturday. “There could be more, there could be less,” he said.

Very few injured people were treated in hospitals, indicating those caught in the blast had either escaped or died. “It is a black-and-white situation,” Quebec Health Minister Rejean Hebert told reporters.

It is not clear why the train began rolling down toward the town or why the crude oil, not normally considered highly explosive, blew up.

The rail line is owned by Montreal, Maine & Atlantic, which said the engineer had secured the train for the night and left.