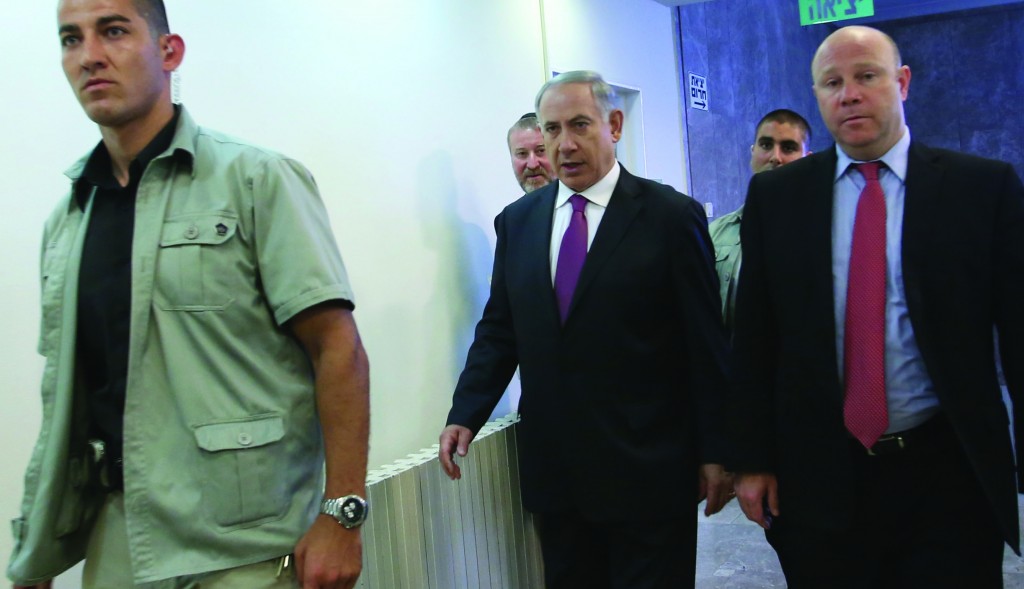 The Israeli Cabinet approved on Sunday the new military draft law that calls for the recruiting of yeshivah students by the age of 21 or a jail sentence, by 14 votes in favor and 4 abstentions.

Three Yisrael Beiteinu ministers abstained from the voting due to the Perry Committee’s failure to include provisions for drafting Israeli Arabs into the military or alternative civilian service, as well as the universal conscription from age 18 (yeshivah students can defer service until age 21).

Housing Minister Uri Ariel (Jewish Home) abstained due to dissatisfaction with a clause that could adversely affect the Hesder students. According to the bill, all yeshivah students will serve “at least 17 months.” Ariel wants the “at least” to be struck, in view of the fact that some committee members want the Hesder recruits to serve 24 months, comparable to the 24 months chareidim are made to serve according to the law.

However, those abstentions were regarded as merely symbolic since Yisrael Beiteinu MKs said they will support the bill in the Knesset and have no intention of creating a coalition crisis over it.

Justice Minister Tzipi Livni again voiced objection to the bill in its current form. “The proposed law is only a partial solution and is not free from flaws,” she said, referring to the relatively short term for Hesder students. However, Livni said she would vote for the bill in the Knesset plenum since it represents movement toward a more “equal sharing” of the burden, in her view.

She vowed that when the time for chareidi conscription comes in 2017, she will fight to lengthen the term for Hesder students, as per the opinion of the attorneygeneral.

The bill now heads to the Knesset, where it needs to pass in three readings. Ariel said that the bill will still undergo changes before its final passing in the Knesset.

Prime Minister Binyamin Netanyahu’s comment to the Cabinet, “We will enact this change gradually while considering the special needs of the [chareidi] population,” did nothing to mollify chareidi political leaders, who issued a series of condemnations.

United Torah Judaism MK Rabbi Yaakov Litzman denounced it as “a continuation of this government’s program of destroying Torah in Israel. We are living through a period in which the Torah world and the yeshivos are experiencing a frontal assault, in which anti-religious forces seek to uproot all that is holy. But they will not succeed.

“Anyone who is a partner to this government will have to answer for this in the future. This means not only the heads of the Likud Beiteinu party and Bennett and Lapid, but also the leaders and voters of the Jewish Home party. Everyone who supported and voted for this party, which founded and maintains this anti-religious government, bears personal responsibility for all the attempts the government is making to destroy Torah.”

UTJ MK Rabbi Moshe Gafni noted that Israel thus becomes “the only government in the world which has determined that Torah study is not legitimate.”

Furthermore, he said Prime Minister Binyamin Netanyahu would never be forgiven for this “after he received decades of [political] support from us, nor Jewish Home chairman Naftali Bennett, whose party purports to be religious and has Torah students among its supporters.”

UTJ MK Rabbi Meir Porush called it “a sad day for the chareidi-religious Jewish world. This day will be recorded as a dark day for the Jews living in the land of Israel,” he declared.

MK Menachem Eliezer Moses (UTJ) said that the government’s decision would be “remembered as an everlasting disgrace. This government has emblazoned on its flag the liquidation of the Torah world and persecution of the chareidi public, both spiritually and materially. But they will not prevail over us. The Torah is stronger than any draconian law that seeks to destroy it.”