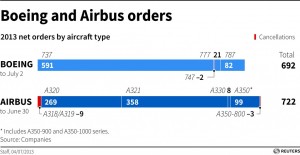 Polish airline LOT has cancelled one trans-Atlantic flight and postponed another after technical problems on two of its Boeing 787 planes, the carrier’s spokeswoman said Thursday.

Barbara Pijanowska-Kuras confirmed that a flight to Chicago was canceled on Wednesday because of problems with the power system, and another to Toronto was postponed due to issues associated with the plane’s tracking system.

She said the problems were minor and not linked to the battery problems behind the global grounding of the 787 fleet earlier this year.

The Toronto flight took off Thursday morning after the problem was fixed. The other plane was still undergoing checks on Thursday and passengers were put on other flights, she said.

LOT has four 787s and was the first European airline to buy the plane, dubbed the Dreamliner by Boeing. All four are making dozens of flights each week to New York, Chicago, Toronto and Beijing, Pijanowska-Kuras said.

However, the plane has proved something of a headache for the cash-strapped company, which is currently going through a restructuring that involves layoffs.

LOT is in talks with Boeing over how much it should be compensated for the grounding of the world’s fleet.

This article appeared in print on page 9 of the July 5th, 2013 edition of Hamodia.