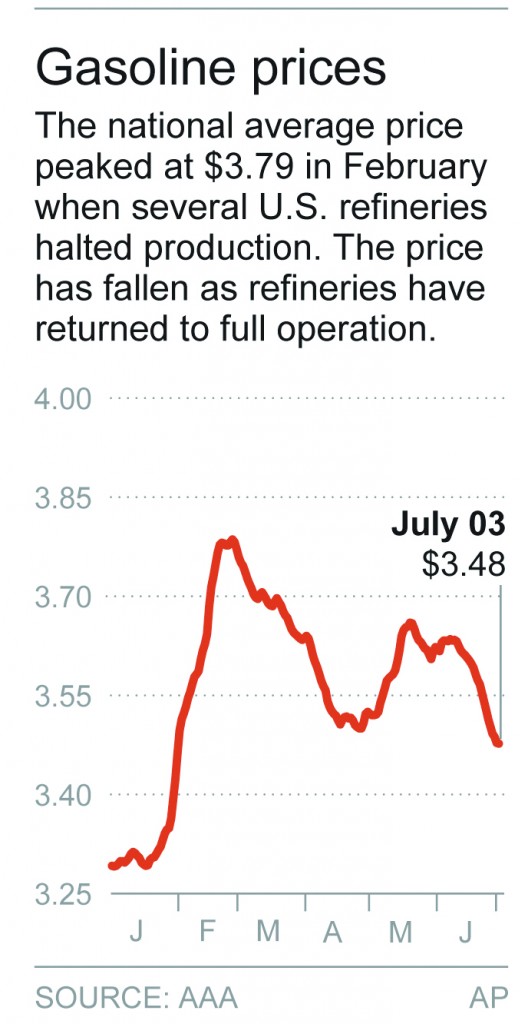 Gasoline prices are on a summer slide, giving U.S. drivers a break.

The national average for a gallon has fallen for 21 days straight and is now below $3.50 for the first time since February. The reason is that oil prices have been relatively stable, and refineries are turning out more gasoline after completing springtime maintenance.

The drop may be interrupted temporarily because oil prices spiked Wednesday on fears that the turmoil in Egypt would disrupt the flow of crude in the Mideast. Analysts, however, don’t expect a sharp increase at the pump because global oil supplies are ample and U.S. refineries are producing plenty of gas.

The national average price of a gallon is $3.48, according to AAA, OPIS and Wright Express. That is 16 cents below its post-Memorial Day high of $3.64 on June 10.

For much of the nation, the slide has been gradual. But for some drivers, especially in the Midwest, it has been a roller-coaster ride. Prices shot up there early last month because of refinery maintenance work and a fire, then plunged after the refineries ramped back up.

Patrick Francis, who owns a used-car lot in Toledo, Ohio, filled up his Volvo for $2.89 per gallon over the weekend in preparation for a family trip to Hilton Head, N.C. Just three weeks earlier, he was paying more than $4.

Tom Kloza, chief oil analyst at GasBuddy.com, predicted the national average will hover between $3.30 and $3.60 for the rest of the summer. That would be somewhat lower than the last two summers, when gasoline prices spent part of the season above $3.70 per gallon.

While analysts are not expecting a resulting surge in gasoline prices, they could rise quickly if the Mideast unrest does disrupt oil supplies. Gas could also climb if a hurricane threatens the heart of the refining industry along the Gulf Coast.

This year’s early summer decline, while welcome, is smaller than the seasonal drops of the last two years, when gas prices also fell between Memorial Day and July 4. Gasoline is 15 cents more  than it was last year at this time.

“When refineries go down, it can create immediate and severe havoc,” Kloza said. “It’s a very shallow distribution system, quick to fill and quick to empty.”

That’s what happened in the Midwest earlier this year. A fire broke out at a Marathon refinery in Detroit in late April, while maintenance was under way at an Exxon Mobil refinery in Joliet, Ill., and a BP refinery in Whiting, Ind.

Prices soared above $4 a gallon in parts of Ohio, Michigan, Wisconsin and Indiana. As the refineries recovered, prices fell. By July 3, gas was $3.33 in Ohio.

Regional spikes and plunges are likely to occur more often in coming years. Since 1993, the number of U.S. refineries has shrunk by a quarter to 143, but the nation’s refining capacity has grown 18 percent. The remaining refineries are getting bigger, so if one goes down, it’s a bigger shock to the system.

Some U.S. drivers will be paying a little more because of higher gasoline taxes that went into effect July 1. California and Maryland taxes rose 3.5 cents per gallon, Connecticut’s climbed 4 cents and Wyoming’s 10 cents. Virginia drivers are getting a break; the gas tax there fell 6.4 cents.

Gasoline taxes account for the biggest difference in pump prices for U.S. drivers. Local, state and federal taxes vary from nearly 70 cents per gallon in New York, California and Hawaii to half that in Missouri, New Jersey, Oklahoma, South Carolina and Virginia, according to the American Petroleum Institute, the industry’s chief lobbying group.