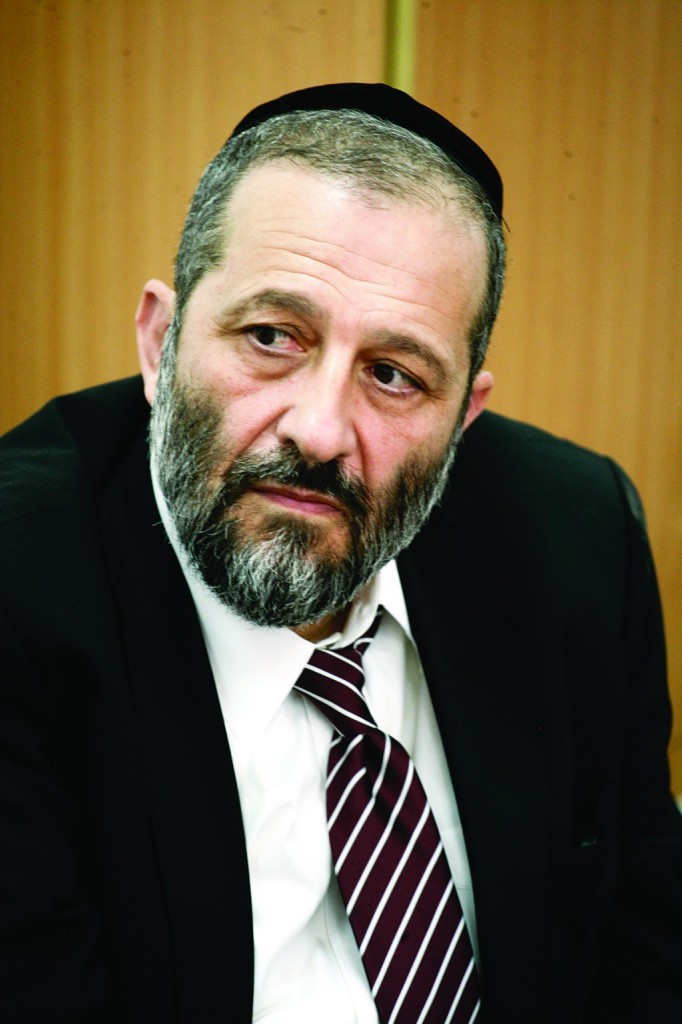 Chareidi MK’s confronted government officials on the red line issue of outside interference in the Torah education system and discriminatory funding practices during a stormy session of the Knesset Education Committee, vowing that only Gedolei Yisrael will set the curriculum.

MK Rabbi Moshe Gafni made an impassioned speech against imposition of the secular core curriculum threatening total withdrawal of funding from those schools which refuse to comply. He said that should this component of the budget bill be passed, he would propose “that the chareidi community sever connections with the Education Ministry because it is run by individuals who do not care about what happens to chareidi children.”

Evidence of the contemptuous attitude was provided on Tuesday, the same day as the committee session, by Education Minister Shai Piron (Yesh Atid) who stated that “it is wrong for municipalities to waste money on chareidi education.”

Speaking at a local authorities’ conference on Tuesday, Piron voiced his intention to revoke the Nahari Law, which allows municipalities to pay for adjunct services in chareidi schools — such as administration and maintenance — at 75% of what the state schools are funded for these same services.

Yet, at the same time, seemingly oblivious to any contradiction, Piron said that “we won’t harm any population sectors that want to live here in accordance with their faith.”

United Torah Judaism representatives on the committee tried to beat back the move to annul the Nahari Law. Yet, at the same time, seemingly oblivious to any contradiction, Piron said that “we won’t harm any population sectors that want to live here in accordance with their faith.”

United Torah Judaism representatives on the committee tried to beat back the move to annul the Nahari Law. “This is a harsh and illogical blow to the chareidi education system,” MK Rabbi Moshe Gafni declared. “It’s cruelty towards children. On the one hand, they want to cancel assistance to chareidi schools. On the other, they make no alternative suggestions, and leave the children of the chareidi system as hostages.”

Rabbi Gafni noted that alternative funding methods for such essentials as maintenance and electricity would entail “a complex and bureaucratic process that is characterized by endless foot dragging.” Rabbi Gafni demanded that the chairman of the committee, MK Amram Mitzna (Hatnuah), not bring the clause in the budget arrangements law that annuls the Nahari Law for a vote until a suitable and fair alternative is presented that will enable funding for minimal services for the chareidi education system. The clause must first pass in the education committee before it can be brought for a vote in the Knesset.

MK Rabbi Eliezer Menachem Moses (UTJ) predicted that “annulling the Nahari Law will bring about corruption and a preference for funding based on political considerations,” rather than educational ones.

Rabbi Moses explained the “problem now is that the heads of the local authorities are not happy about helping chareidi schools, and it is clear that they will base their decisions whether to help or not on political considerations. The national outlay for education is 60 billion shekels. The chareidi students comprise one third of the students in the country. Therefore, the question that begs an answer is why we aren’t being allocated a third of the funding that we deserve? Where is the justice? Where is equality?

“The objective of cancelling the Nahari Law is to steal the last few pennies that the government still gives us,” he concluded.

MK Mickey Rosenthal (Labor) said that the chareidi MKs are not alone in their perception of a hostile attitude toward them in the government.

As he participates in one Knesset committee after another, Rosenthal said, he encountered one undeniable reality: the hatred that Finance Minister Yair Lapid harbors against chareidim.

The committee chairman, MK Amram Mitzna, asked the research department of the Knesset to prepare a report that will assess the division of the budget pie to the students in the chareidi sector compared to those in the state sector, after a meeting participant pointed out that the chareidi education budget pie is smaller to begin with. He called another meeting of the committee for next week.

The government assault on the chareidi sector in virtually every area dominated the first day of the Eighth Annual Administrators’ Forum, sponsored by the Hebrew edition of Hamodia.

The gathering in Yerushalayim, which is usually devoted to speeches, presentations and exhibits for business and investment, this time heard one speaker after another address the situation that is on everyone’s mind.

Shas Chairman Aryeh Deri called upon the chareidi community to undertake a painful self-assessment (cheshbon hanefesh). “How can it be?” he asked. “So many decrees — it is not a natural occurance. Not a single [budget] clause was left untouched. Such discrimination and cruelty, and nobody says a word.

“It is easy to blame this ruinous government, and they deserve every condemnation. Nevertheless, as shomrei mitzvot, we have to ask, ‘What does Hashem want from us?’

“We have to be united,” he said, “not only outwardly, but within ourselves, our own communities, we are all in the same boat. These decrees do not differentiate between Ashkenazim and Sephardim, Chassidim and Litaim (Litvaks). Perhaps in this month we are being told that if we don’t understand the message being hinted to us, then we will have to understand it by force. After all, the outcome of these decrees will have to be that we must unite.”

Dr. Yitzchak Kadman, chairman of the Council for the Welfare of the Child, told the Forum that “the politicians present us with two choices: work or welfare. In other words, they are saying, a person who works needs no financial help from the government; and that government assistance promotes idleness.”

“Most of the families in Israel who receive government assistance are working families. Just today, in a discussion in the Knesset, a woman who is a single parent came forward and said that working as a secretary she earns 4,500 shekels a month. Obviously, that is not enough to support a family. So she works extra hours. Now, they want to tell her they are cutting her assistance, so that she will go to work. But she is working!”

The incitement against the chareidim in the form of planned cuts of child allocations “are a hate crime — literally,” Kadman said, adding that large families represent only a small percentage of the population, and that the savings to the state will be marginal.