We Can Promote Fairness By Reducing Sales Taxes 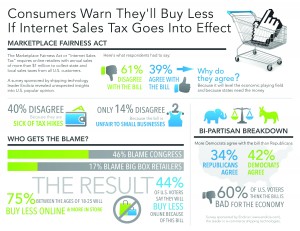 Whenever politicians claim the need to raise your taxes for the sake of fairness, beware. The “Marketplace Fairness Act” is the latest such attempt.

Supporters of the law — which would allow states to require online retailers to collect sales taxes for the buyer’s jurisdiction, even if the seller has no physical presence in the jurisdiction — argue that otherwise, online retailers, who currently have to collect sales taxes only for states in which they have a physical presence, would continue to enjoy an unfair advantage over brick-and-mortar retailers.

In the United States, there are an estimated 9,600 sales-tax jurisdictions — states, cities, and counties, each with its unique rates and rules.

If you own a brick-and-mortar store in a jurisdiction that has a sales tax, you only need to collect one rate of tax, with one set of rules, for all buyers. But an online sales tax would require businesses to become experts on sales tax rates and rules of every jurisdiction.

In a purported attempt to deal with this issue, the MFA includes a provision that requires each state to provide free tax software to online retailers, and to establish a single office where online retailers could send the sales taxes they collected for that state, so that they wouldn’t have to send separate checks to each county or city that has a unique sales tax law or rate.

However, that still would potentially leave every retailer with the possibility of having to install programs and collect taxes for every state. Writing in The Wall Street Journal last summer, Patrick M. Byrne and Jonathan E. Johnson III, respectively the chairman/CEO and president of online retailer Overstock.com, spoke of their company’s attempt to install sales-tax software.

“Proponents of an e-sales tax wrongly assert there is cheap and easy ‘plug-and-play’ software that solves the complexities of nationwide point-of-delivery tax collection,” said Byrne and Johnson. “That was not our experience.

“It took our team of 20–30 experienced IT professionals 9,412 hours over five months to install, test and integrate the software that let us properly calculate use tax in one additional state [emphasis added]. The annual software license fees for the first year, the internal and external development and installation costs, and the cost of collateral hardware and software came to $1.3 million.”

Such costs could crush smaller companies. The bill only exempts retailers with annual revenue of less than $1 million, which means many businesses with middle-class owners would still be subject to this law.

It’s quite possible that, rather than dealing with all these jurisdictions  (currently, 45 states and the District of Columbia charge sales taxes, and, as the Journal reported on May 6, the bill may include U.S. territories and Indian tribes, whose number is close to 600), some online retailers may limit their sales to certain states, believing that the hassle of installing software, collecting taxes, and being subject to audits from tax-collection entities may only be worthwhile for those states from which they get a substantial amount of their business.

That would have the terrible consequence of limiting the choices of consumers. One great thing about online shopping is that it brings a national — or even global — marketplace right to your door: You are able to seek out the best deals from all around the world, resulting in fierce competition among all sellers, and therefore the best and cheapest products for all consumers.

Furthermore, it is fundamentally unfair to force a business owner to become a tax collector for a jurisdiction in which he or she has never had a physical presence, or perhaps never even stepped into or used its public services. Taxation without representation was one thing from which our Founding Fathers were seeking freedom when they proclaimed their independence 237 years ago tomorrow.

We are a nation that is taxed enough already, and freedom-loving people should instinctively oppose laws that would take even more money out of the hands of those who earned it and place it into the hands of politicians. Whenever tax unfairness does exist, we can make things fair by taxing less rather than more. The higher the sales-tax rate, the greater the advantage an online retailer has over a brick-and-mortar one. Therefore, if all jurisdictions significantly reduced their sales tax rates — if not eliminated them altogether — that would serve to create a more level playing field between retailers, while making our economy more free.

This article appeared in print on page 35 of the July 3rd, 2013 edition of Hamodia.