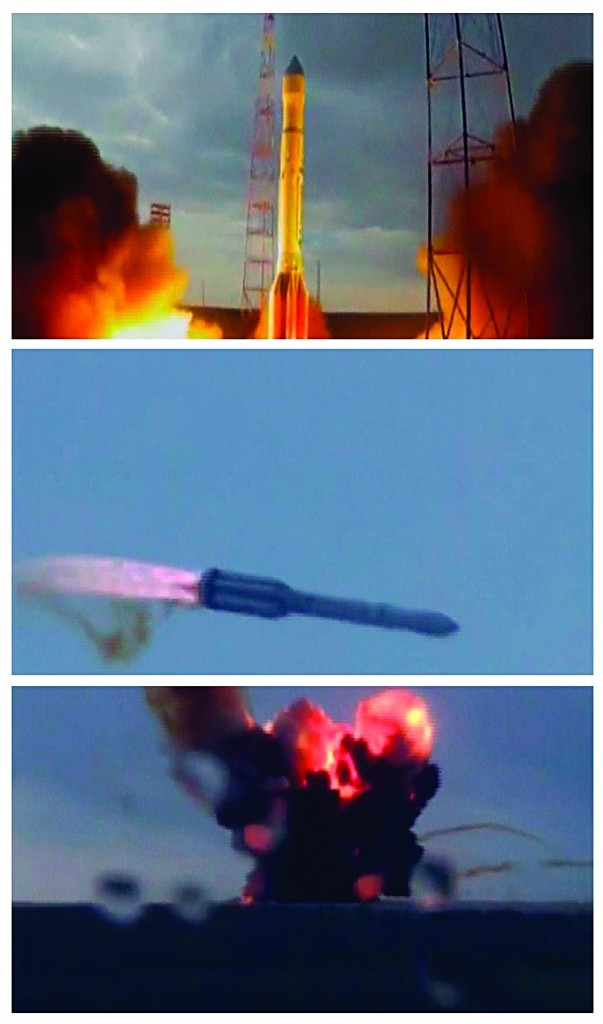 A Russian rocket carrying three navigation satellites worth around $200 million crashed shortly after lift-off from the Russian-leased Baikonur launch facility in Kazakhstan on Tuesday after its engines suddenly switched off.

The accident led to a large spill of heptyl, a highly toxic rocket propellant, but there were no reports of casualties or of any immediate threat to nearby settlements.

State-run Rossiya-24 media showed footage of the Proton-M booster rocket veering off course seconds after take-off. It flew horizontally and began to come apart in flames, crashing in a ball of fire near the launch pad.

The crash, which echoes the costly loss of three navigation satellites in 2010, will further damage the reputation of Russia’s once-pioneering space program, cause delays in launches and threaten its hold on some 40 percent of the market for space launches.

Russia’s space agency Roscosmos said the accident had been caused by the emergency switch-off of the rocket’s engines 17 seconds into the flight. The shutdown could have been caused by a problem with the engine or the guidance system, the state-run RIA news agency reported.

Talgat Musabayev, head of Kazakhstan’s space agency Kazcosmos, said nitric oxide — a product of burning heptyl — was much less toxic for humans. He said it was raining in the area, so toxic clouds would probably not reach the town of Baikonur some 60 km (38 miles) away.

However, the authorities instructed locals to stay at home and not to open windows, and ordered shops and restaurants closed, said Kazakh Interior Minister Kalmukhambet Kasymov.

The estimated loss from the three satellites, meant for the trouble Glonass satellite navigation system, was about $200 million, Rossiya-24 reported.

The system, first conceived by the Soviet Union more than 40 years ago, has been plagued by failed launches, including one in 2010 in which three satellites were also lost, accompanied by suspicions of corruption and embezzlement. Its chief designer was dismissed last year during a fraud investigation.

Russia’s workhorse Proton rocket, known at the time under its UR-500 code, made its first test flights in the mid-1960s.

It was originally designed as an intercontinental ballistic missile to carry a nuclear warhead targeting the Soviet Union’s Cold War foe the United States. But it was never deployed as a nuclear weapon.

Several crashes of Proton rockets accompanied by spills of heptyl have led to temporary strains in relations between Russia and Kazakhstan.

Russia is increasing spending on space, and plans to send a probe to the moon in 2015, but the pioneering program that put the first man in space in 1961 has been plagued in recent years by setbacks, including botched satellite launches and a failed attempt to send a probe to a satellite of Mars.