Weary crews on Tuesday looked for a break in the weather to gain ground against a fierce Arizona wildfire that has already killed 19 of their fellow firefighters in the worst wildland fire tragedy in 80 years.

The lightning-sparked blaze, which broke out on Friday afternoon near the community of Yarnell, has torched some 200 structures, most of them homes.

On Sunday, an elite squad of 19 firefighters died in the fire after they were outflanked and engulfed by wind-whipped flames in seconds, before some could scramble into cocoon-like personal shelters.

Details of Sunday’s deaths of all but one member of the specially trained, 20-man Granite Mountain Hotshots were still sketchy as an investigation was launched into how the disaster unfolded. Information about the survivor, including his identity and how he escaped death, was not immediately released.

A memorial service on Monday drew at least 1,800 people to a sports hall at Embry-Riddle Aeronautical University on the outskirts of Prescott.

Fire officials said the fallen men, most in their 20s were victims of a highly volatile mix of erratic, gale-force winds, low humidity, a sweltering heat wave and thick, drought-parched brush that had not burned in some 40 years.

They were trapped as a wind storm kicked up and the fire suddenly exploded on Sunday, said Peter Andersen, a former Yarnell fire chief who was helping the firefighting effort.

“The smoke had turned and was blowing back on us,” Andersen said. “It looked almost like a smoke tornado, and the winds were going every which way.”

‘Nothing They Could Do’

The powerful gusts abruptly split the fire, driving it in two directions, then pushing flames back in on the Hotshot crew, who were working on one flank of the fire front, he said.

Sunday’s disaster in Arizona marks the highest death toll among firefighters from a U.S. wildland blaze since 29 men died battling the Griffith Park fire of 1933 in Los Angeles, according to the National Fire Protection Association.

Meanwhile, the U.S. Forest Service’s Fire and Aviation Management Budget was cut by 5 percent in fiscal 2013, reducing the number of firefighters to 10,000 from 10,500, NIFC spokeswoman Jennifer Jones said. And the budget for eliminating dry brush and other types of fuel has fallen each of the last three years, from $350 million in 2010 to $301 million in 2013, she said. 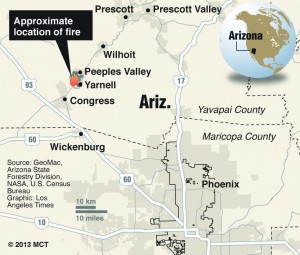 Andersen said some of the men on the ground made it into their shelters, according to an account relayed by a ranger helicopter crew flying over the area.

“There was nothing they (helicopter crew) could do to get to them,” he said.

The deaths brought an outpouring of tributes from political leaders, including U.S. President Barack Obama, who is on an official trip to Africa. Arizona Governor Jan Brewer called the deaths “one of our state’s darkest, most devastating days” and ordered state flags flown at half staff through Wednesday.

Authorities who ordered the evacuation of Yarnell and the adjoining town of Peeples Valley say they were proceeding cautiously following Sunday’s tragic events and hoped that strong winds that have driven the blaze would diminish on Tuesday.

The Yarnell Hills blaze was one of dozens of wildfires in several western U.S. states in recent weeks in what experts say could be one of the worst fire seasons on record.