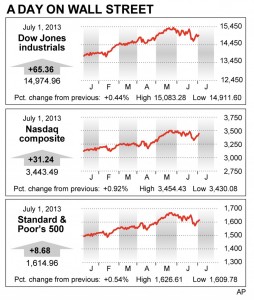 Investors have stopped worrying about the Federal Reserve. At least for now.

The U.S. stock market rose on Monday as investors judged that the economy still isn’t growing fast enough for the central bank to cut back on its stimulus program.

U.S. manufacturing grew modestly in June after a pickup in new orders and stronger production, according to a private survey. The Institute for Supply Management said its factory index increased to 50.9 in June from 49 in the previous month.

The Standard & Poor’s 500 index last month logged its first monthly decline since October after investors were unsettled by comments from Federal Reserve Chairman Ben Bernanke. Bernanke said June 19 that the Fed could ease back on its stimulus later this year and end it by the middle of 2014 if economy continues to recover.

The Dow Jones industrial average gained 65.36 points, or 0.4 percent, to 14,974. The Dow gained as much as 173 points in during morning trading before drifting lower throughout the afternoon.

Eight of the 10 industry groups that make up the S&P 500 index rose, led by materials companies, a category that includes miners and chemical makers, and industrial companies. Utilities and phone companies were the only ones to decline.

This week’s most closely watched economic release will be the government’s monthly employment report Friday. Economists expect the U.S. added 165,000 jobs in June, a figure that would affirm the economy’s steady, but slow, trajectory, said Scott Wren, a senior equity strategist at Wells Fargo Advisors.

“It’s a confirmation of more of the same,” said Wren. “More modest growth, more modest inflation, but not a big acceleration.”

The Fed is currently buying $85 billion of bonds a month to keep interest rates low and encourage borrowing and spending. That stimulus has been a major factor supporting a rally in stocks this year and the threat of it being withdrawn made stock markets more volatile last month.

The S&P 500 closed at a record high of 1,669 on May 21. A day later, stocks began dropping after minutes of a Fed meeting were released suggesting the stimulus could be scaled back. The sell-off picked up pace when Bernanke laid out the possible timeline for ending the bond purchases.

The S&P closed at 1,573 on June 24, down almost 6 percent from its record, before it began recovering from the sell-off. The index is up 13.2 percent this year.

In Europe, stock indexes rose after a mixed set of economic indicators for the region. While unemployment in the 17 countries that use the euro rose to another record high in May, manufacturing picked up in Britain, France and Italy and stabilized in Spain.

In commodities trading, the price of oil climbed $1.43, or 1.5 percent, to $97.99 a barrel. The price of oil rose on concerns that unrest in Egypt, the largest Arab nation, could spread and affect the transport of oil supplies in the Middle East and Africa.

This article appeared in print on page 8 of the July 2nd, 2013 edition of Hamodia.