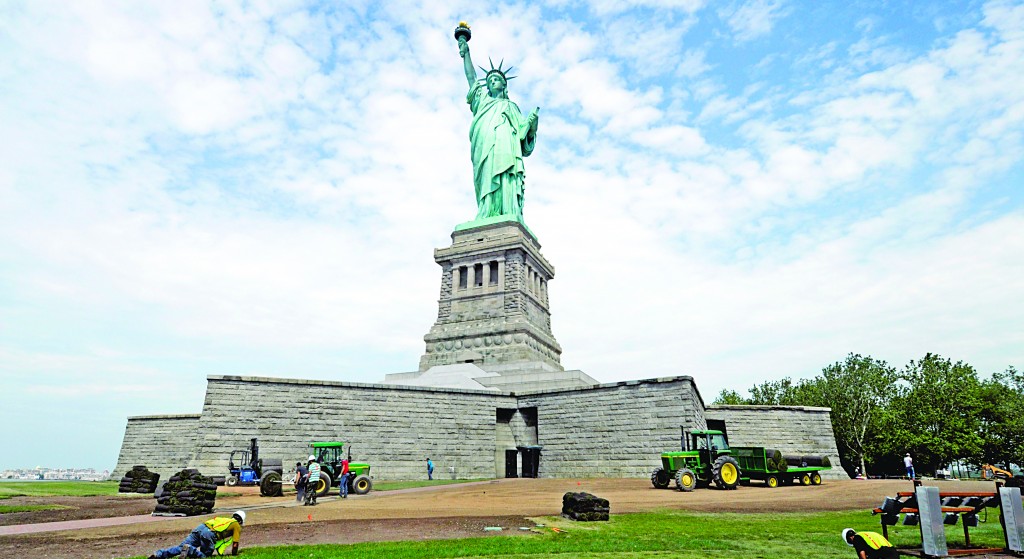 Nine months after Superstorm Sandy swamped her little island, the Statue of Liberty will finally welcome the huddled masses of tourists again on Independence Day.

Sandy made landfall one day after the statue’s 126th birthday, flooding most of the 12 acres that she stands upon with water that surged as high as 8 feet. Lady Liberty herself was spared, but the surrounding grounds on Liberty Island took a beating. Railings broke, docks and paving stones were torn up and buildings were flooded. The storm destroyed boilers, sewage pumps and electrical systems.

Hundreds of National Park Service workers from as far away as California and Alaska spent weeks cleaning mud and debris. In recent months, all mechanical equipment was moved to higher ground as workers put the island back in order.

The damage to Liberty Island and neighboring Ellis Island cost an estimated $59 million.

“People will have, more or less, the same access to Liberty Island that they had before,” said John Warren, a spokesman for the Statue of Liberty National Monument.

A gift from France, the statue was conceived to symbolize the friendship between the two countries and their shared love of liberty. It was dedicated in 1886 and welcomes about 3.5 million visitors every year.

People who purchased tickets in advance can also look out over New York Harbor from the statue’s crown, which reopened after a long hiatus one day before Sandy hit and was forced to close again due to the storm. The crown had been off-limits for a year during a $30 million upgrade to fire alarms, sprinkler systems and exit routes.

Security screening for visitors will be held in lower Manhattan after city officials criticized an earlier plan to screen them at neighboring Ellis Island, which endured far worse damage to its infrastructure and won’t be open to the public anytime soon.

For tourists like Davide Fantinelli, an 18-year-old from Italy, the reopening comes a bit too late. Fantinelli will already be back home by July 4th, but he and his parents managed to catch a glimpse of the statue from the deck of a water taxi.

The sight of it was one he’ll never forget.

“Because it’s liberty,” Fantinelli said. “It means freedom — of this great nation.”