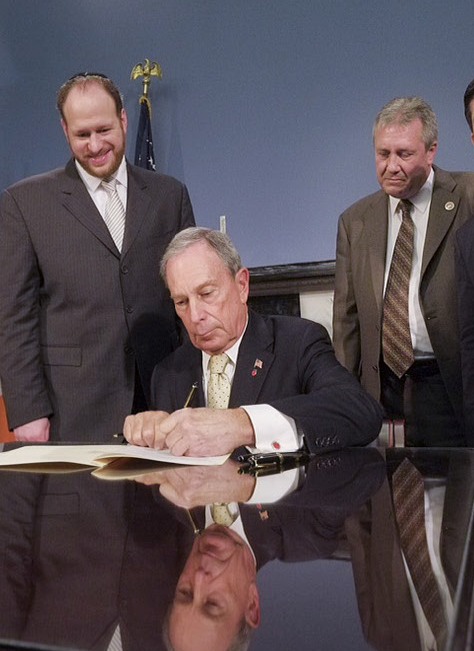 New York’s billionaire mayor said Monday he has the right to use some of his personal fortune to garner support from City Council members on bills restricting police tactics he plans to veto.

The two bills passed by the City Council last week create an inspector general for the New York Police Department and make it easier for people who believe they have been racially profiled to sue the city. Saying that the bills would crimp police, Bloomberg spent weeks, first trying to prevent their passage, and is now trying to veto the legislation.

But both bills passed with at least 34 votes, the minimum number needed to override a veto. On Monday, Bloomberg responded to a report that he could use his wealth to influence City Council members up for re-election, saying he was willing to support candidates with whom he agrees, financially or otherwise.

The mayor noted that it was standard practice for outside groups to attempt to influence their representatives, and said he would similarly push candidates to vote in his favor.

Bloomberg did not detail how he could do so, but he could potentially give to council candidates or make what is known as independent expenditures — such as ads advocating for or against them — on their behalf, subject to certain contribution limits and rules that would also apply to any other New Yorker.

Or he and his aides could also simply call and lobby City Council members to their cause.

“I’m going to encourage other people to vote for those things,” the mayor said Monday at an unrelated news conference. “Some of these things are life and death issues, like these two horrendous bills in the City Council.”

Advocates of the measures denounced the mayor’s attempt to sway the bills’ passage. The group Communities United for Police Reform reiterated in a statement Monday that the two bills would protect New Yorkers’ civil rights and safety.

Bloomberg is “now seeking to sow fear and spread around his billions of dollars to threaten council members and buy their votes,” said spokeswoman Joo-Hyun Kang.

The mayor has 30 days from the bills’ passage to issue a veto, at which point the City Council would have another 30 days to override.