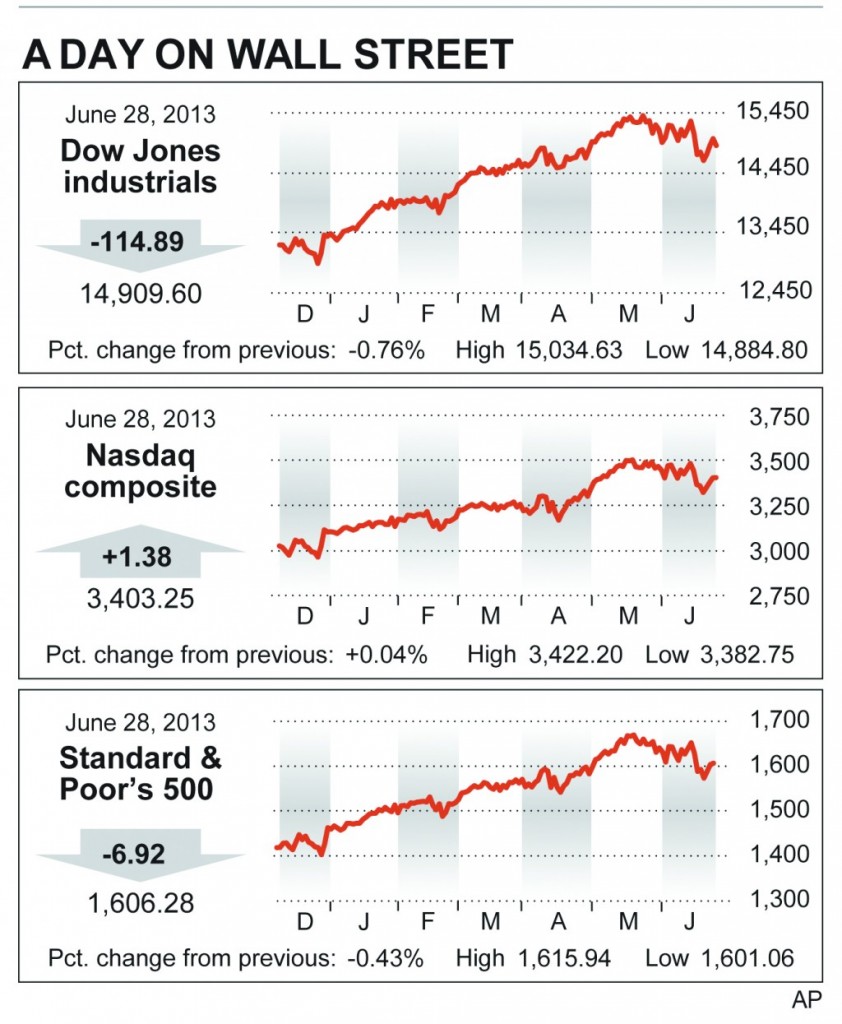 Given the wild trading of late, it was a calm close to the month.

After flitting between tiny gains and losses most of Friday, the stock market closed mostly lower, a peaceful end to the most volatile month in nearly two years.

“It’s a dull Friday,” said Gary Flam, a stock manager at Bel Air Investment Advisors. A bull market, he added, is “rarely a straight march up.”

The Standard & Poor’s 500 index ended its bumpy ride in June down 1.5 percent, the first monthly loss since October. Still, the index had its best first half of a year since 1998 — up 12.6 percent.

Investors still seem unsure how to react to recent statements by Federal Reserve officials about when the central bank might end its support for the economy.

Mixed economic news added to investors’ uncertainty Friday. An index of consumer confidence was almost unchanged, but a gauge of business activity in the Chicago area plunged.

“Investors don’t know what to make of the news,” said John Toohey, vice president of stock investments at USAA Investment Management. “I wouldn’t be surprised to see more ups and downs.”

Stocks jumped around in June. By contrast, the first five months of the year were mostly calm, marked by small but steady gains as investors bought on news of higher home prices, record corporate earnings and an improving jobs market.

Investors have long known that the central bank would eventually pull back from its bond purchases, which are designed to lower interest rates and get people to borrow and spend more. Last week, Bernanke got more specific about the timing. He said the Fed could start purchasing fewer bonds later this year and stop buying them completely by the middle of next year if the economy continued to strengthen.

Investors dumped stocks, but then had second thoughts this week as other Fed officials stressed that the central bank wouldn’t pull back on its support soon. The Dow gained 365 points Tuesday to Thursday. For the month, the Dow moved up or down at least 100 points 16 of 20 trading days, the most since September 2011.

Bonds have also been on a bumpy ride in recent weeks, mostly down.

Bond yields, which move in the opposite direction of bond prices, have rocketed.

The yield on the 10-year Treasury note rose to 2.49 percent from 2.47 percent late Thursday. Last month, the yield was as low as 1.63 percent. Treasury yields help set borrowing costs for a large range of consumer and business loans.

It was a rocky month in foreign markets, too. Major indexes in France, Germany and Britain lost about 5 percent in June.

In U.S. economic news Friday, the University of Michigan said its index of consumer sentiment dipped to 84.1 in June from 84.5 the previous month. But that was still relatively high.

Meanwhile, the Chicago Business Barometer sank to 51.6 from a 14-month high of 58.7 in May. That was well below the level of 55 that economists polled by FactSet were expecting.

The S&P 500 has gained 13.8 percent since the start of the year, including dividends. That is its best performance in a first half of the year since 1998.

On Friday, eight of the 10 industry groups in the S&P 500 were down for the day, led by health-care companies. They fell 0.9 percent.