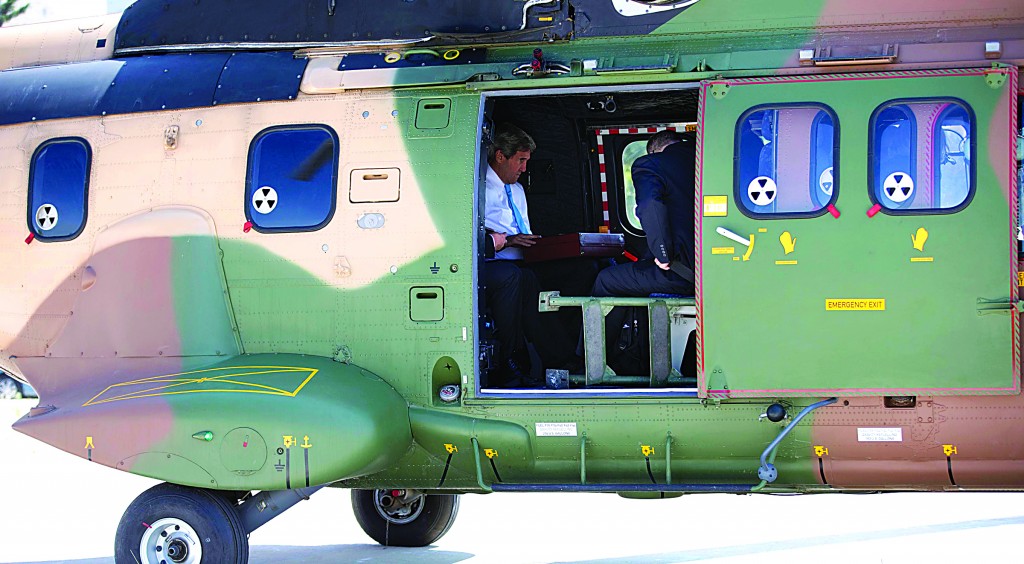 There was vague talk of progress but no details as Secretary of State John Kerry concluded his latest round of Mideast shuttle diplomacy on Sunday.

As Kerry departed after four days of intense efforts to bring Israel and the Palestinians back to the negotiating table, it was unknown whether the fog of diplomacy was designed to protect the sensitive final steps toward a breakthrough, or mere face-saving to conceal another abject failure to resolve the decades-old conflict that has frustrated a succession of presidents and secretaries of state.

“I’m pleased to tell you that we have made real progress on this trip. And I believe that with a little more work, the start of final-status negotiations could be within reach,” he told a news conference before his departure from Ben Gurion Airport.

“We started out with very wide gaps and we have narrowed those considerably,” he said, without elaborating. “We are making progress. That’s what’s important and that’s what will bring me back here.”

Kerry met Israeli, Palestinian and Jordanian leaders repeatedly over many hours in Yerushalayim, Amman and Ramallah during his trip, which was extended for a day in the hope of making a breakthrough to final-status talks. A trip to Abu Dhabi had to be cancelled to allow more time for the Israel-Palestinian meetings.

At one point, an Israeli official said that an announcement of an Israeli-Palestinian meeting under U.S. and Jordanian auspices was imminent.

But Civil Defense Minister Gilad Erdan, who is close to Netanyahu, told Israeli media soon after that such was not the case. When asked about it, he said: “To my regret, no, as of now.”

“To the best of my understanding, Mahmoud Abbas is still demanding the same preconditions, which we have no intention of meeting,” Erdan said.

But on Sunday afternoon, “senior sources within the political establishment” were quoted by Ynet as saying there was real progress. “The gaps aren’t that big and there is progress,” they said.

Despite recent State Department condemnations of Israeli building plans announced for Yehudah and Shomron and east Yerushalayim, Kerry played down the issue’s importance.

When asked by reporters if Israel’s refusal to impose a building freeze was an impediment to revived peace talks, he said that “the answer is no. There are any number of obstacles, but we are working through them. We have to have the courage to stay at this and to make some tough decisions,” he said, according to an Arutz Sheva report.

In fact, on Sunday, the Yerushalayim Municipality’s Finance Committee was scheduled to proceed with plans to develop 900 housing units in Har Homa, Army Radio reported on Sunday.

According to the report, on the agenda are the paving of streets and laying infrastructure for the neighborhood which has been in the planning stages since 2011.

“We have to understand that not everything has a solution. There’s a tendency towards ‘solutionizing,’ and — no. Not everything can be solved,” he told Arutz Sheva.

He went on to warn of the danger of trying to impose a solution. “In Oslo, they thought they had found a solution to an intractable problem… When they tried to force a solution, it led to more than 1,000 people being killed,” he said.

However, Bennett acknowledged that there had been movement during Kerry’s visit. “Let them talk as much as they want. When they bring peace in a basket, then we’ll talk,” he said.

“We knew what government we were getting into. In the opposition we would have had no influence,” he said.

In contrast to other right- wing Likud leaders like MK Danny Danon, Bennett said he believes Netanyahu is serious about pursuing the “two-state solution…Netanyahu thinks the least bad option for Israel is an unarmed PA-led Arab state alongside Israel, he explained. “He thinks there will ultimately be a solution.”

Netanyahu said at Sunday’s weekly Cabinet meeting that any future agreement with the Palestinians will be submitted to a national referendum.