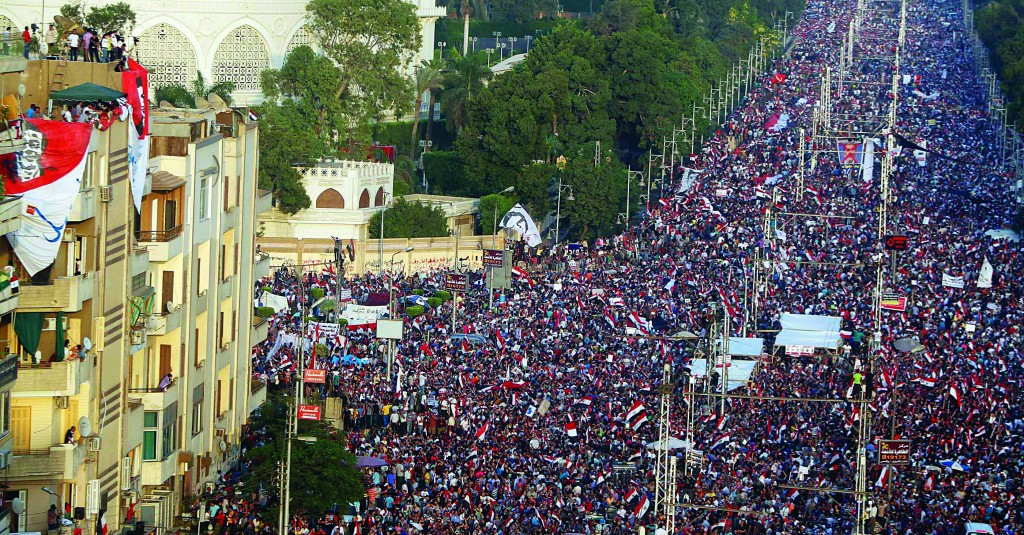 Hundreds of thousands of opponents of Egypt’s Islamist president poured onto the streets in Cairo and across much of the nation Sunday, launching an all-out push to force Mohammed Morsi from office on the one-year anniversary of his inauguration. Fears of violence were high, with Morsi’s Islamist supporters vowing to defend him.

Nationwide, the rallies were among the largest Egypt has seen in nearly two and a half years of continuous upheaval, including during the square-packing, 18-day uprising that toppled autocrat Hosni Mubarak in early 2011.

Waving Egyptian flags and carrying posters of Morsi crossed out in red, crowds packed central Cairo’s Tahrir Square, the birthplace of anti-Mubarak, while thunderous chants of “Erhal!” —“Leave!” — rang out.

At the same time, a tidal wave of crowds marched on the Ittihadiya presidential palace, filling a broad boulevard for blocks and spilling over into nearby avenues. “You lied to us in the name of religion,” some
chanted, and others raised a banner proclaiming “Morsi (equals) Mubarak. Early presidential elections.” The crowds hoisted long banners in the colors of the Egyptian flag and raised red cards — a sign of expulsion in soccer.

Near Ittihadiya palace, thousands of Islamists gathered in a show of support for Morsi outside the Rabia al-Adawiya Mosque. Some Morsi backers wore homemade body armor and construction helmets and carried shields and clubs — precautions, they said, against possible violence. Their crowd also swelled as the sun went down and summer temperatures became more tolerable.

Up until nightfall, violence was limited to a few pockets in the provinces as the two sides largely stayed apart. The anti-Morsi protests had a festive atmosphere, with many families with young children among the crowds of men, women and elderly.

In a potentially volatile confrontation after nightfall, however, several dozen youths attacked the headquarters of Morsi’s Muslim Brotherhood. They threw stones and firebombs at the building, and people inside the villa fired at the attackers with birdshot, according to an Associated Press News cameraman at the scene. Earlier in the day, two offices belonging to the Brotherhood’s Freedom and Justice party were attacked and ransacked in the city of Bani Suef.

The opposition’s goal is to show through sheer numbers in the street that so much of the country has turned against Morsi, the country’s first freely elected president, that he can no longer rule. Similarly sized crowds turned out in the Mediterranean city of Alexandria and the Nile Delta cities of Mansoura, Tanta and Damanhour, with sizeable rallies in cities nationwide.

“Mubarak took only 18 days although he had behind him the security, intelligence and a large sector of Egyptians. Morsi got all of us against him, even the army and police,” said Amr Tawfeeq, an oil company employee marching toward Ittihadiya. “He won’t take long. We want him out and we are ready to pay the price.”

Morsi, who has three years left in his term, has said he will not step down, saying street protests cannot be used to overturn the results of a free election.

“There is no room for any talk against this constitutional legitimacy,” he told Britain’s The Guardian newspaper in an interview published Sunday, rejecting early elections.

If an elected president is forced out, “well, there will [be] people or opponents opposing the new president too, and a week or a month later, they will ask him to step down,” he said.

As the crowds massed, Morsi’s spokesman repeated the president’s offer of dialogue with the opposition to resolve the nation’s political crisis, calling it “the only framework through which we can reach understandings.”

The confrontation is the culmination of polarization and instability that have been building since Morsi’s June 30, 2012, inauguration as Egypt’s first freely elected leader. The past year has seen multiple political crises, bouts of bloody clashes and a steadily worsening economy, with power outages, fuel shortages, rising prices and persistent lawlessness and crime.

The protesters are secular and liberal Egyptians, moderate Muslims, Christians — and what the opposition says is a broad sector of the public that has turned against the Islamists. They say the Islamists have negated their election mandate by trying to monopolize power, infusing government with their supporters, forcing through a constitution they largely wrote and giving religious extremists a free hand, all while failing to manage the country.

“The country is only going backward [under Morsi]. He’s embarrassing us and making people hate Islam,” said Donia Rashad, a 24-year-old unemployed woman who wears the conservative Islamic headscarf. “We need someone who can feel the people and is agreeable to the majority,” added Rashad.