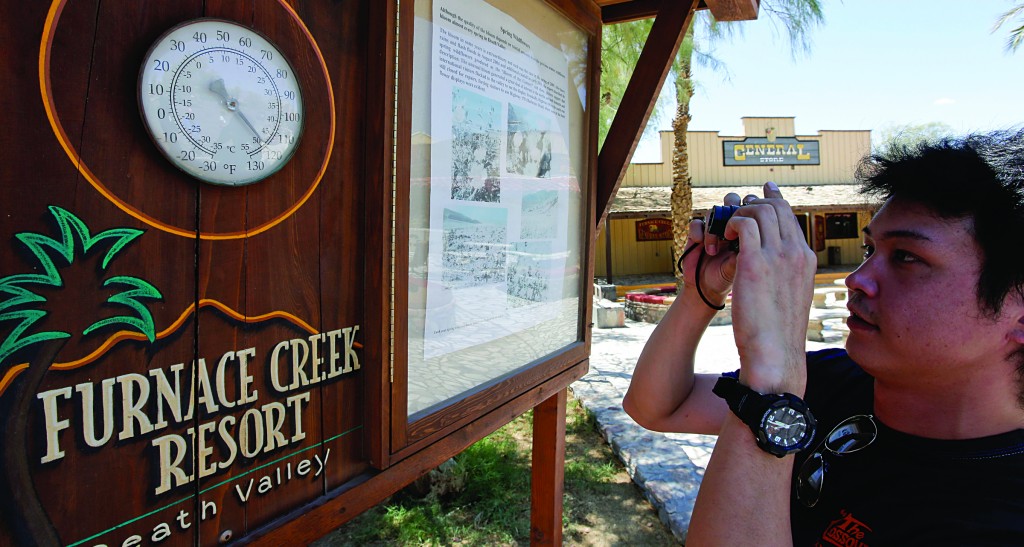 Associated Press photographer Chris Carlson is no stranger to heat. He grew up just outside Palm Springs, California. On Friday, he returned to his desert roots, driving to the hottest place on earth on one of the hottest days of the year. Below, he describes what it is like to be in roasting heat in Death Valley:

“By 9 a.m., the two bags of ice I loaded in the cooler are gone and the floor of my rental car looks like a storage bin at a recycling plant. Hydration is essential.

“I know what to expect in Death Valley — unrelenting heat so bad it makes my eyes hurt, as if someone is blowing a hair dryer in my face. I don’t leave CDs or electronics in the car because they could melt or warp. I always carry bottles of water.

“But I still make mistakes. I forgot my oven mitts, the desert driving trick I learned as a teenager after burning my hands too many times on the steering wheel. And my rental car is black, adding several degrees to the outside temperature of 127 Fahrenheit. When the digital thermometer at the Furnace Creek visitor center ticks up to 128, a few people jump out of their cars to take a picture. The record temperature for the region, and the world, is 134 degrees F, reached a century ago.

“I try to work in flip-flops, but the sun sears the tops of my feet, and I am forced to put shoes on. My cellphone … is so hot that it burns my ear when I try to take a call from my wife. …

“I’m surprised to find out that hotels are packed with visitors. This is Death Valley’s busy time of year. Tourists, mostly from Europe, come to experience extreme heat, or they just didn’t know what they were getting into…

“Tourists are out today, but they rarely emerge from their cars. They drive through the brown, cracked landscape … occasionally rolling down the windows, but only briefly.

“Those who do attempt to get out of their cars park in sparse shade, sprint to local landmarks, snap a few photos, and then jump back in their cars. Most were out at daybreak. By midday, few people can be seen.”