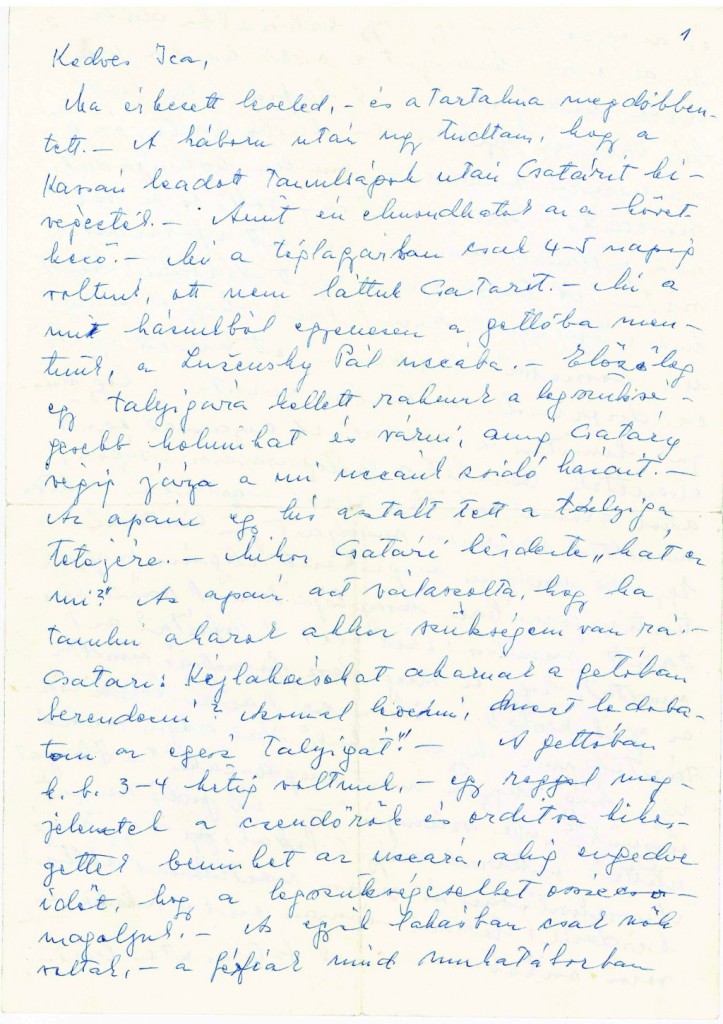 She didn’t live long enough to give evidence in person, but her written words will serve as eternal testimony. Seven decades after Mrs. Blanche Erlich, a”h, was brutally beaten and deported to Auschwitz, her handwritten testimony against a 98-year-old Nazi war-crimes suspect about to go on trial in Hungary has come to light, after an acquaintance contacted Hamodia.

For more than 50 years, Mrs. Erlich was convinced that the officer who tortured her and her siblings in the Kosice ghetto had been executed for his crimes at the end of the war.

When a friend, who was also originally from Kosice, wrote to her from the United States in the mid 1990s that Laszlo Csatáry had been found alive in Canada, Mrs. Erlich wrote back from her home in Israel, giving detailed testimony.

“I thought it best if you sent it where it needs to go,” she wrote.

In 1997, Csatáry, who had lived for decades in Canada and worked as an art dealer, left the country just before he was due to appear at a deportation hearing.

With no one to send it to, the letter with Mrs. Erlich’s testimony remained in the hands of the friend in Brooklyn, and in the interim Mrs. Erlich passed away.

Last year, Csatáry was located in Hungary and detained by local authorities. Though he is currently expected to go on trial in Hungary, it is also possible that he could be extradited to Slovakia, where he was convicted in absentia in 1948.

In January, a court in Kosice changed the sentence in that case from death to life in prison since the death penalty is banned in the European Union. That could open the way for his extradition.

After reading a recent article about Csatáry’s indictment by Hungarian prosecutors, the friend, who asked that her name not be published, contacted Hamodia.

“I have a letter that needs to go to the prosecutors,” she revealed. “I was so happy to read that at last he has been caught, but I can’t believe he got away with it for so long.”

In the letter, which was translated from Hungarian by Hamodia and will be forwarded to the European authorities, Mrs. Erlich describes encountering Csatáry when her family was forced from their home into the ghetto.

“We had to put the most necessary articles on a cart and wait until Csatári went through all the Jewish homes in our street. My father put a small table on top of the cart. When Csatári asked him, ‘What is this?,’ my father answered, ‘I will need it to study.’

“‘Do you want to furnish luxury apartments in the ghetto?’ Csatári replied, ‘Take it out immediately, because [otherwise] I’ll throw out the whole cart.’”

Mrs. Erlich recounts that they spent the next few weeks in the ghetto.

“One morning gendarmes appeared, shouted and chased us into the street, giving us hardly any time to take the most important items with us. — In one apartment there were only women, and one of the girls put all the family’s things into a big backpack, also the kids’ things. She could barely fit through the gate, so one of the gendarmes hit her on the back; she fell onto the street and all of her things scattered. — It was a terrible sight, and that was the last straw.

“They took us and my mother to the ghetto command, where they immediately hit us in the face with their fists and screamed, ‘Just wait, Csatári will be here soon.’

“After a long silence he asked Csatári what should happen to us.

“‘Give them something to retaliate for,’ Csatári said.

“They hit us with whips, belts and sticks,” Mrs. Erlich continues in her letter, “so that even in Auschwitz … we were asked where we got these black and [blue marks.]”

She recounts that they were then searched, during which Csatári’s men found the Aryan papers they had hidden in their shoes.

“Then they took us to a dark cellar where there were other people already bound hand and foot. They bound us hand and foot, too, together with my mother…  We were ‘sitting’ stooped in this way for hours; then the henchmen came in and untied the ropes, and we went up to the street with difficulty, where the [population of the] ghetto was already lined up. We found our poor father, who was desperate because he didn’t know what happened to us. —

“Then the march started; we walked from Luzensky Pál Street through town all the way to the brick factory, where after [several] days we were packed tight into rail cars and taken to Auschwitz Birkenau.”

In a postscript to her letter, Mrs. Erlich related that at the conclusion of the war, “witnesses were sought to testify about Csatári, who was captured, as far as we knew. I was sick and wasn’t able to go out, but my sibling went, and also another man who was bound hand and foot with us in the cellar.

“After they told what happened, the policeman who interviewed them asked if they had anything else to say. The man answered, ‘Perhaps if we testified as soap, it would be more interesting?’”