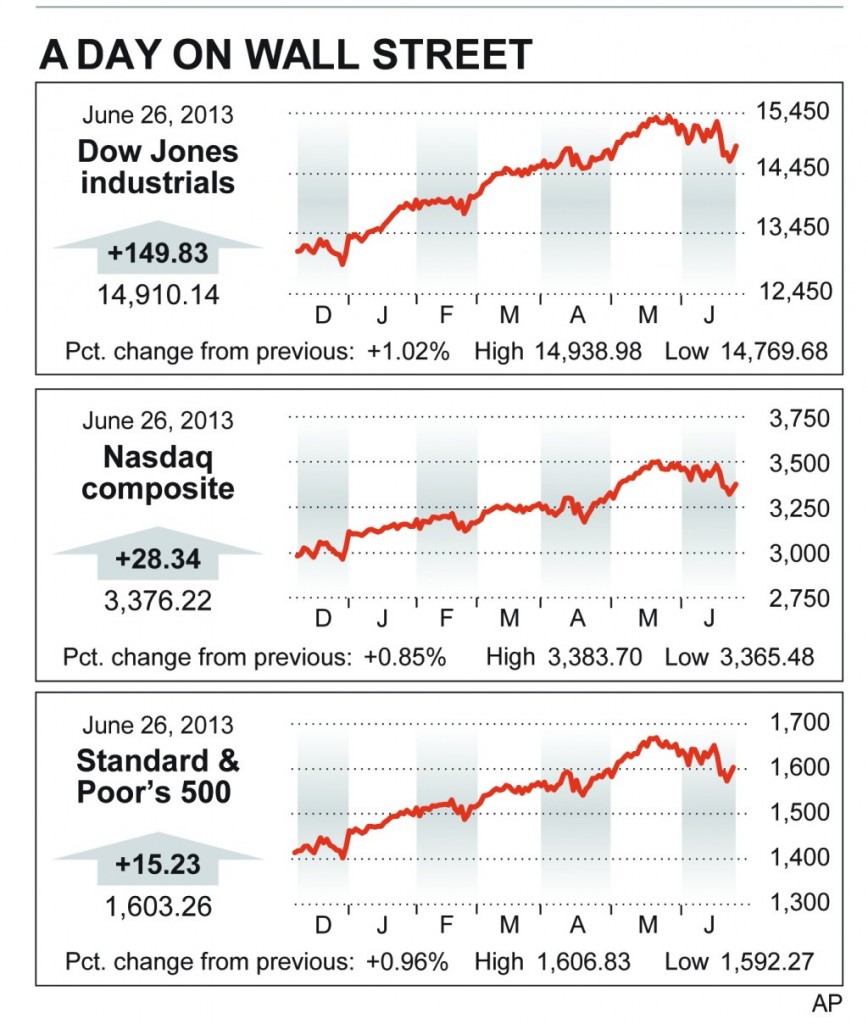 The stock market is focusing on the positive.

Major stock indexes rose for a second day on Wednesday. It was the first two-day stretch of gains since the Federal Reserve gave a timetable for throttling back its economic stimulus a week ago.

Even news that the economy grew at a much slower annual rate in the first quarter than previously estimated — 1.8 percent versus 2.4 percent — didn’t dampen the buying. In fact, it persuaded some traders that the Fed could extend its easy money policies beyond next year. That would likely be a boon for the economy and the stock market.

Investors also seemed to realize that they dumped too many stocks last week, when they panicked after the Fed outlined plans on how it might eventually end its stimulus measures.

“The sell-off was a little bit overdone,” said David Coard, head of fixed-income sales and trading at Williams Capital Group in New York. “Sometimes you’ve got to take a breather.”

The yield on the 10-year Treasury note fell for the first time since June 14, slipping to 2.54 percent from 2.61 percent.

The price of gold plunged $45.30, or 3.6 percent, to $1,229.80 an ounce, its lowest price in three years. The reasons for the sell-off weren’t entirely clear. Investors tend to buy gold when they’re looking for a safe place to put money. Wednesday, they did that by buying stocks in dividend-rich, stable sectors — such as utilities — as well as government bonds.

The markets have been volatile for weeks, ever since Fed Chairman Ben Bernanke started hinting that a pullback in Fed stimulus programs would start soon. In the last 25 trading days, the Dow has ricocheted through 17 triple-digit swings, split almost evenly between ups and downs.

Still, some investors were already turning their attention away from the Fed and back toward company earnings. There they saw reason for caution, not optimism.

Analysts expect earnings to grow about 3 percent, though that is down from estimates as high as 15 percent a year ago, according to S&P Capital IQ. Revenue is expected to fall by 0.3 percent.

Chris Baggini, senior portfolio manager at Turner Investments in Berwyn, Penn., pointed out that the stocks that performed best are the kind that investors tend to buy when they’re nervous about the economy.

Friday is the last trading day for the second quarter, which could also make the market’s moves erratic. Money managers will be looking to get out of their holdings and book profits for clients before then.