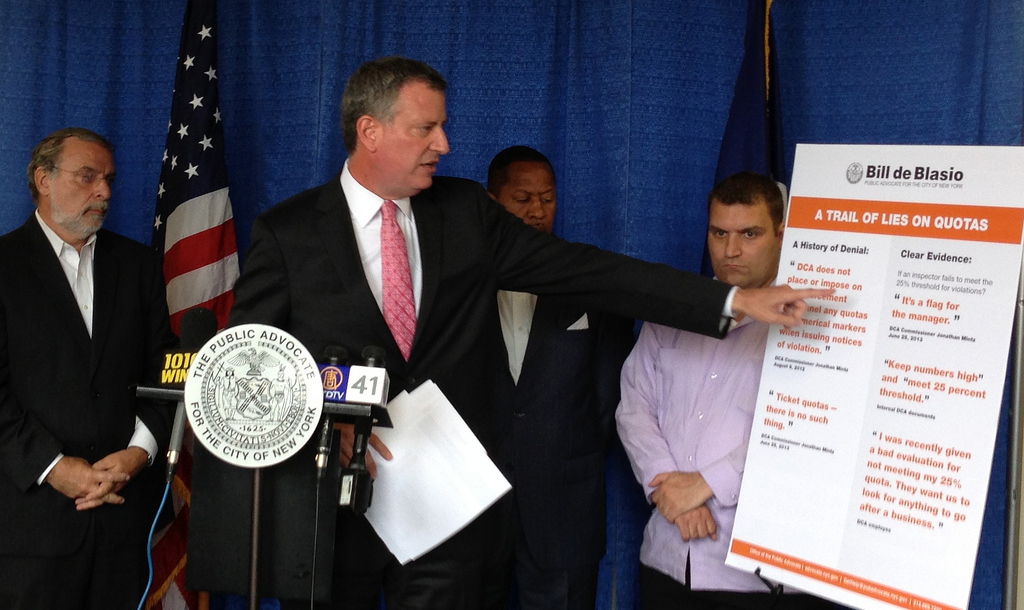 With a finding that the city official responsible for fining businesses caught with violations had a quota system in place, New York City’s public advocate demanded at a press conference Wednesday the commissioner’s resignation.

Bill de Blasio said that Jonathan Mintz must quit his job heading the Department of Consumer Affairs in order to restore integrity among small business owners.

“You know, Mayor Bloomberg likes to say he doesn’t raise taxes,” said de Blasio, who is running for mayor in the Democratic primary. “…But for years, small businesses have been facing the equivalent of a tax increase because of rising fines. It’s a hidden tax, but it’s just as damaging, it’s just as difficult for small businesses.”

Assemblyman Dov Hikind, joining the conference, wondered at the 120 percent jump in fines since 2010.

“Nobody wants to admit there’s a quota,” Mr. Hikind said. “But there is. We all know it.”

One of the main methods the city is using to eliminate fine dismissals or reductions is by making it harder for violators to appeal, according to M. Ben Reich, a Boro Park consultant for businesses who were fined by the city.

“It used to be that I addressed the merits of the case as required — it didn’t have to be in detail, but it was not scrutinized the way it is today,” said Mr. Reich, manager of Elite Consulting. “Now I’m getting sentences that I’ve never got.”

He said that while he was once able to negotiate a $71,000 fine to a hundred dollars on appeal, the recent hardening at the consumer affairs department means that he is getting those deals much less often.

Mr. de Blasio called that outrageous and proposed a law to ban quotas.

“It is not because people just decided to break the law en masse,” he said on the doubling of fine revenue over the past two years, “it’s because city government decided to get money off the sides of small businesses.”

De Blasio said that Mintz had assured him last week in writing that his department “does not place or impose on its enforcement personnel any quotas or numerical markers when issuing notices of violation.”

“Ticket quotas — there is no such thing,” Mintz told CBS News on Tuesday.

But later that day, internal documents and whistleblower interviews unveiled by the public advocate’s office brought to light a “25 percent threshold,” meaning inspectors are expected to issue one violation for every four businesses they inspect. The agency also pressured judges to rule against small businesses’ appeals.

“I was recently given a bad evaluation for not meeting my 25 percent quota,” one employee told de Blasio’s office. “They want us to look for anything to go after a business.”

“Keep numbers high” and “meet 25 percent threshold,” agents were encouraged, according to internal documents revealed by the investigation. If agents did not meet that quota, Mintz warned in an ominous email, “It’s a flag for the manager.”

Quotas on ticketing for driving or parking violations was also denied by the city for years, until a whistleblower report in 2010 revealed its existence.

“A quota is a quota,” he said in a statement Wednesday. “There is no other word for setting targets for inspectors and making clear they’ll face added scrutiny if they fail to meet the threshold.”