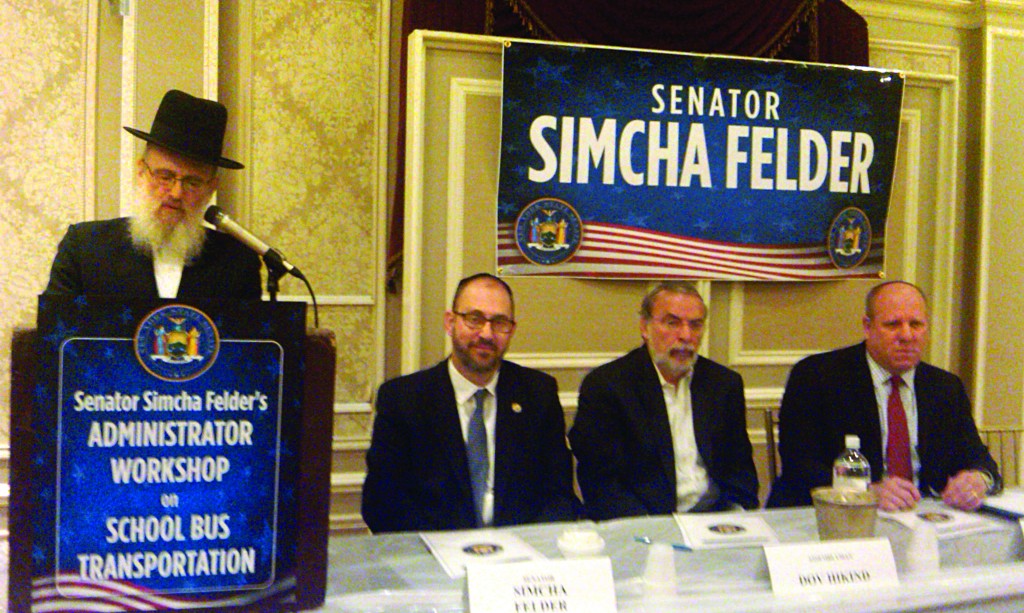 An event meant to educate New York educators on the new law mandating state-funded busing for late- homecoming schoolchildren turned into a thanksgiving session Wednesday, with officials and yeshivos lauding the two state legislators who turned a decades-old dream of askanim into a financial reality for parents of students in private schools.

Simcha Felder in the Senate and Helene Weinstein in the Assembly sponsored the bill to pay transportation costs for eligible students — of yeshivos, charter or Catholic schools, and certain public schools — who dismiss late, and to drop them off less than half the required distance demanded of children who get out before 4:00 p.m.

“People said that this is something that could never, ever be done, that private school parents will always be forced to pay out of pocket to bring their children home safely from school,” Mr. Felder marveled, choking up at one point as he recalled the battle and Rabbi Shimon, and his son Shiya, Ostreicher’s devotion to getting the bill passed.

“This bill is the culmination of a 25-year struggle for the safety of our children,” Rabbi Aharon Welz, administrator of the Satmar girls school who hosted the event in Ateres Chaya hall, said in introducing Felder.

The dais was graced with top administration and legislative officials, with Eric Goldstein, who heads the department in charge of the city’s nearly 8,000 school buses, and Tracy Green, the department’s chief financial officer who will write the checks reimbursing yeshivos for the busing costs, briefing the approximately 100 yeshivah representatives gathered.

Assemblyman Dov Hikind, the Brooklyn Democrat who was a key mover of the bill, said that the logic behind the law should have been a no-brainer.

“My position was, why do we have to fight for this?” said Hikind, who just got up from sitting shivah for his mother. “It made no sense that because our schools have a longer education day, instead of the city of New York saying, ‘Wow, wonderful, Boro Park, Flatbush, Williamsburg, Crown Heights, etc., they keep their kids in school till 6:00 and 6:30. We should applaud them and be there for them.’”

“We know how hard it is for the yeshivos,” said Mr. Greenfield, a council budget negotiator who is wrapping up a week during which a deal for the city budget was unveiled. “…We know how hard everybody here works for the community, and you should know that we work equally hard on your behalf.”

The details on the bill, and an extended Q&A, came toward the end. Mr. Goldstein, the chief executive of the Office of School Support Services who was lauded Wednesday for his cooperation in ensuring a smooth rollout, detailed how the separate buses work.

Tracy Green outlined how yeshivah administrators should file for reimbursement, mixing an alphabet soup of city lingo that the assembled appeared to comprehend.

Twelve million dollars was allocated for the city to implement what Mr. Goldstein called “a trial year.” Yeshivos that already use city busing are not subject to this cap, but ones who have owned their own buses until now, or yeshivos who are newly joining the busing system are.

Sundays are not included in the 180 days that the city will pay, but yeshivos are allowed five days of publicly funded busing when secular holidays give public schools a day off but yeshivos have regular sessions.

If a yeshivah chooses to use the regular Office of Pupil Transportation busing, it is limited to classes that get out before 4:00, and students are allowed to be dropped off a quarter of a mile away from the child’s home. But the city provides the busing itself.

Under the bill sponsored by Mr. Felder and Ms. Weinstein, however, yeshivos must hire their own bus companies, pay them, and then file for reimbursement each month. The city is then required to drop students off no more than 600 feet away from the home, less than half the distance of OPT busing.

Mr. Goldstein compared the bill to an irrigation system, which could allocate water to different fields, but has no control over the rain itself.

“We don’t make it rain,” he said. “But we do have some people here who have made it rain, so to speak. They have made things happen. And that’s extraordinary.”