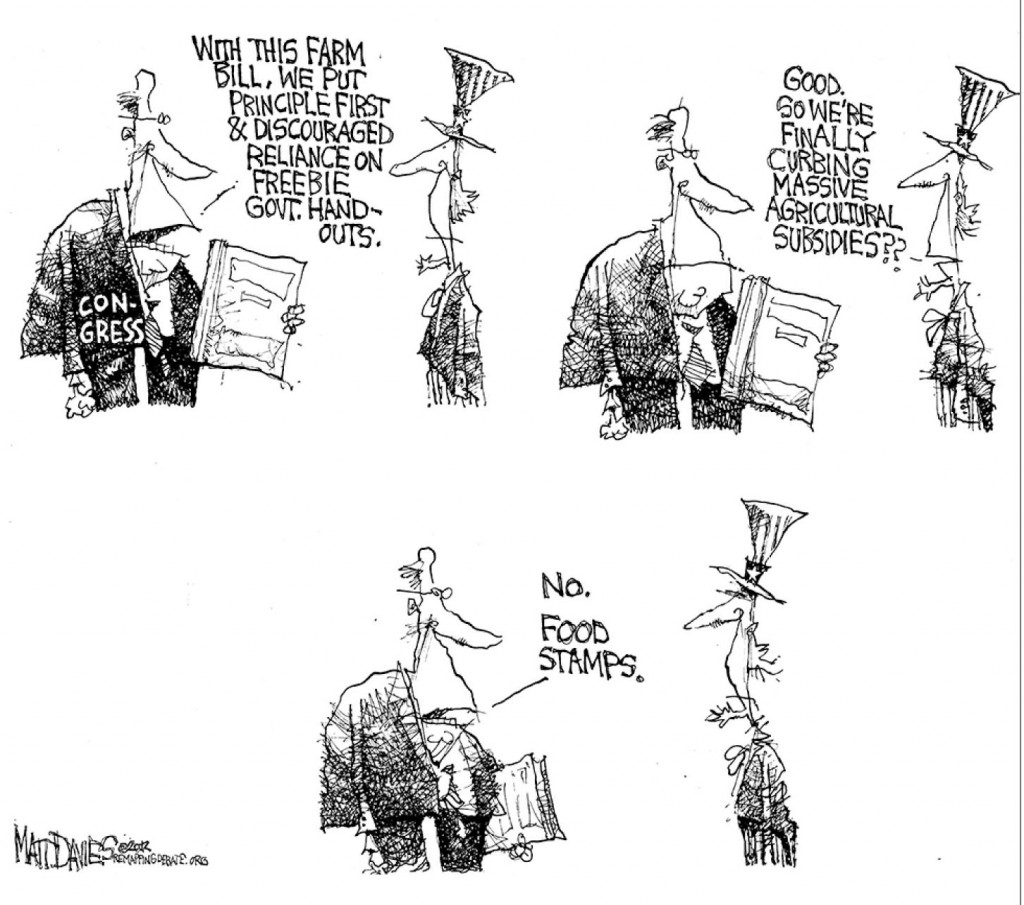 The attempts by House Republicans to slash the SNAP program — better known as food stamps — brings to mind the old and well-known story of the farmer who was telling about his attempts to cut expenses.

“First I halved the amount of oats that feed my horse,” he related. “When I saw that he was doing just fine, I decided to halve it again. The horse kept on performing, so I continued to cut the amount of oats.

“Then, just when I finally taught the horse to manage without food altogether — he died!” the frustrated farmer related.

There is no doubt that the food stamps program is very expensive; it costs tax-payers almost $80 billion annually.

There are many myths associated with food stamps. One of the most popular ones is that it actually rewards people for not working.

In reality, according to the Center of Budget and Policy Priorities (CBPP), SNAP already has strict time-limits for unemployed workers. Able-bodied adults without dependents (ABAWDs) may only receive three months of SNAP benefits during any three-year period, unless they are working in a qualifying job-training program.

Another commonly quoted myth is that it encourages recipients to stay at low-paying jobs.

But as the CBPP points out, the SNAP benefit formula is structured to provide a strong work incentive. For every additional dollar SNAP participants earn, their benefits decline by about 24 to 36 cents, not a full dollar, so participants have a strong incentive to find jobs, work longer hours, or seek better-paying employment.

Furthermore, as a recent UDA report noted, the fundamental reality of most SNAP recipients’ lives is that even after their food stamps, expenses often still outstrip income. The financial strain that recipients experience is eased but not alleviated in full by participation in the SNAP program. Contrary to what some in Congress like to insinuate, it doesn’t and was never intended to pay for all food-related expenses.

But without food stamps, these families — the overwhelming majority of which include young children, seniors or the disabled — would quite literally not have the resources to buy the food they need to keep healthy. Cutting this important program will not only make the indigent even poorer — it will cause malnutrition and great hardship among young children and elderly Americans.

Food stamps are actually a good investment for the U.S. economy.

When George W. Bush sought to prop up the faltering economy, he introduced a stimulus program that included mailing checks to most Americans. Some used the money for trips abroad; others hoarded it in savings accounts. In contrast, food stamps actually serve as an excellent long-term stimulus program. Recipients have to spend the money — otherwise they lose it. They have to spend it right here in the United States, and mostly use it within their own communities. Food stamps help small grocery stores stay open, and allow supermarkets to hire more workers. They, in turn, use their earnings to make purchases and pay for services at other local businesses, and much of the money stays within the community.

Far more could and should be done to help individuals get weaned off food stamps. But cutting the program is the wrong way to do it. Instead, the government should offer incentives such as tax breaks to business owners who raise the wages of low-income workers. The government should place a far greater emphasis on helping these workers get higher paying jobs. Much more resources should be allocated toward training programs, so that low-income workers could continue working at their present jobs while learning new skills during off-hours.

Equally important, the government should provide tangible help such as interest-free loans and even grants to help low-income wage earners go into business on their own. In many cases, they have the ideas, the willpower, and the requisite knowledge. They simply don’t have the money.

There are many good ideas out there, but taking food from the mouths of babes isn’t one of them.