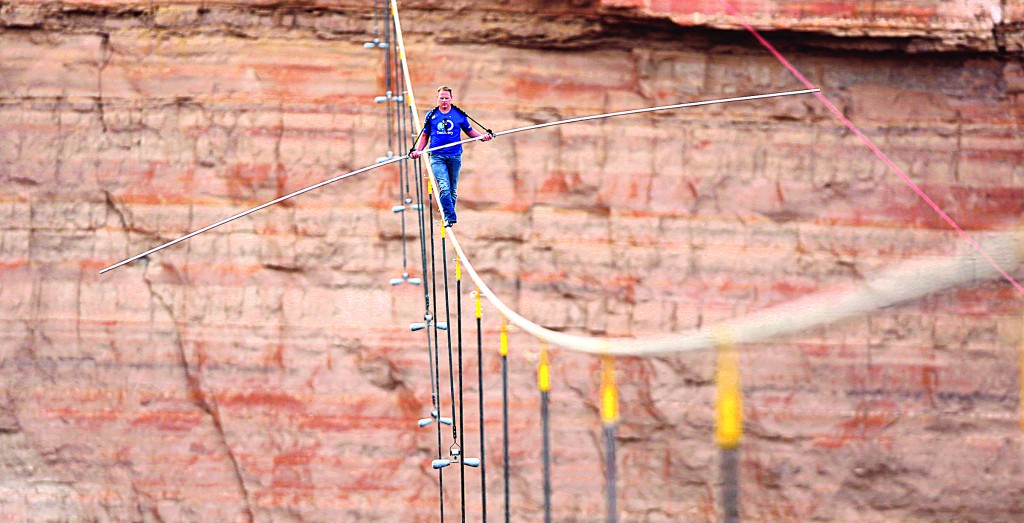 NYPD Commissioner Raymond Kelly was asked on Monday about the possibility of Wallenda, a member of the famous “Flying Wallendas” circus family, walking a tightrope between the Chrysler and Empire State buildings.

The daredevil completed a walk over a gorge near the Grand Canyon on Sunday, walked over Niagara Falls a year ago, and was eyeing New York City for his next death-defying attempt.

“I would say no,” Kelly said. “I think it’s dangerous. He walked across the Grand Canyon, and obviously there’s water at the bottom of the Grand Canyon. Here, there’s thousands of New Yorkers who certainly could be put at risk. So I don’t think it would be wise in this city.”

Wallenda walked a quarter mile Sunday without a safety net or harness, 1,500 feet above the Little Colorado River Gorge.

“Whoo! That’s an amazing view,” he said, before embarking on the 22-minute walk on a 2-inch cable that was watched live by people all over the world. Wallenda paused and crouched twice as winds whipped around him and the rope swayed.

“It was strenuous the whole way across. It was a battle. The winds were strong, they were gusty,” he told reporters. “But there was never a point where I thought, ‘Oh my gosh, I’m going to fall.’”

A Navajo Nation ranger, a paramedic and two members of a film crew were stationed on the canyon floor.

Wallenda, 34, is a seventh-generation high-wire artist from a family with generations of experience with high-profile, high-risk stunts. He grew up performing with his family and dreamed of crossing the Grand Canyon since he was a teenager. Sunday’s stunt took place a year after he traversed Niagara Falls earning a seventh Guinness world record.

Wallenda’s great-grandfather, Karl Wallenda, fell during a performance in Puerto Rico and died at the age of 73. Several other family members, including a cousin and an uncle, have perished while performing wire walking stunts.