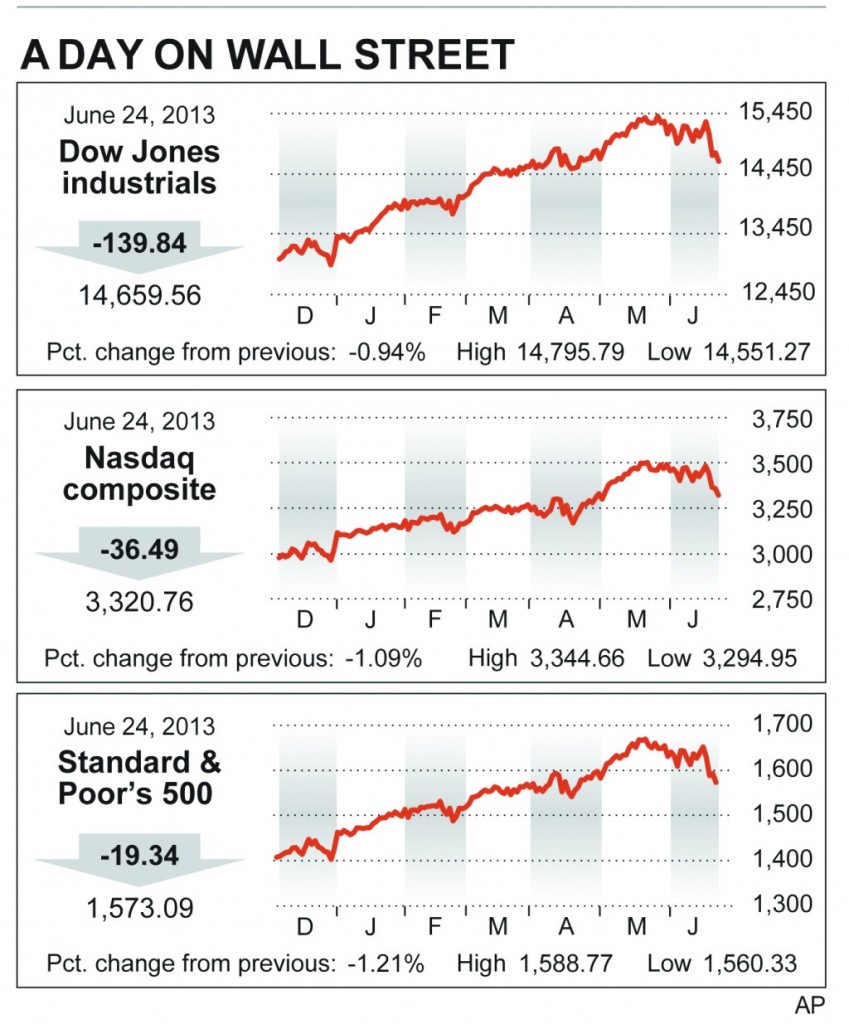 More signs of distress in China’s economy and rising bond yields led to a broad sell-off in stocks Monday, leaving key market indexes down more than 5 percent from their record highs last month.

It was the first 5 percent decline — referred to on Wall Street as a “pullback” — since November.

Pullbacks that occur during bull markets tend to be “nasty and brutish” — but short, said John Manley, chief equity strategist at Wells Fargo Funds Management. He said it’s common to get declines of 3 percent to 7 percent “as the market restores a reverence to risk to the investing public.”

U.S. trading started with a slump Monday. The market recovered much of its loss, then fell back again. By the close of trading, the big stock indexes were clinging to modest gains for the second quarter, which ends Friday.

Before Wall Street opened for trading on Monday, Asian markets were already sharply lower, led by a 5 percent plunge in China’s Shanghai Composite Index. That was the index’s biggest loss in four years. The decline was prompted by a government crackdown on off-balance sheet lending, which made investors worry about China’s economic growth. The selling spread to Europe, where France’s benchmark stock index fell 1.7 percent, Germany’s 1.2 percent.

U.S. traders took one look at that and started dumping stocks. The Dow Jones industrial average fell as much as 248 points in the first hour of trading. The yield on the 10-year Treasury note spiked to its highest in almost two years as the sell-off brought down prices of U.S. government debt. Gold and other metals also fell.

Markets remain vulnerable to any comments from the Federal Reserve about its $85 billion in monthly bond purchases, which have kept interest rates at historic lows and helped drive the stock market’s rally the last four years. On Wednesday and Thursday, the S&P plunged 3.9 percent after the central bank said its bond-buying program could wrap up by the middle of next year as long as economic conditions continue to improve. Stocks edged up Friday, but still had their worst week in two months.

Since starting its bull run in March 2009, the S&P 500 has had seven pullbacks of between 5 and 9 percent and two corrections, decline of 10 percent to 19.9 percent. So far, the market has come back stronger from each setback. The S&P is still up 133 percent during this four-year bull market.

The last time the U.S. stock market had a full-blown correction — defined as a drop of at least 10 percent from a peak — was July 22-Oct. 3, 2011, when the S&P 500 fell 18.3 percent. That fall was caused by concern that a fight between U.S. lawmakers over extending the debt ceiling would push the U.S. into default.

The yield on the 10-year note was unchanged from late Friday at 2.54 percent. Earlier in the day it was 2.67, its highest level in almost two years. The yield has surged from its 2013 low of 1.63 percent on May 3. The increase accelerated last week after the Fed laid out a possible timetable for curtailing its bond-buying program. Yields rise when demand weakens.

The Fed’s easy-money policies have kept bond yields and other interest rates artificially low since the financial crisis of 2008, making borrowing cheaper. The 10-year yield is used as a benchmark for many kinds of loans to individuals and businesses, including home mortgages.