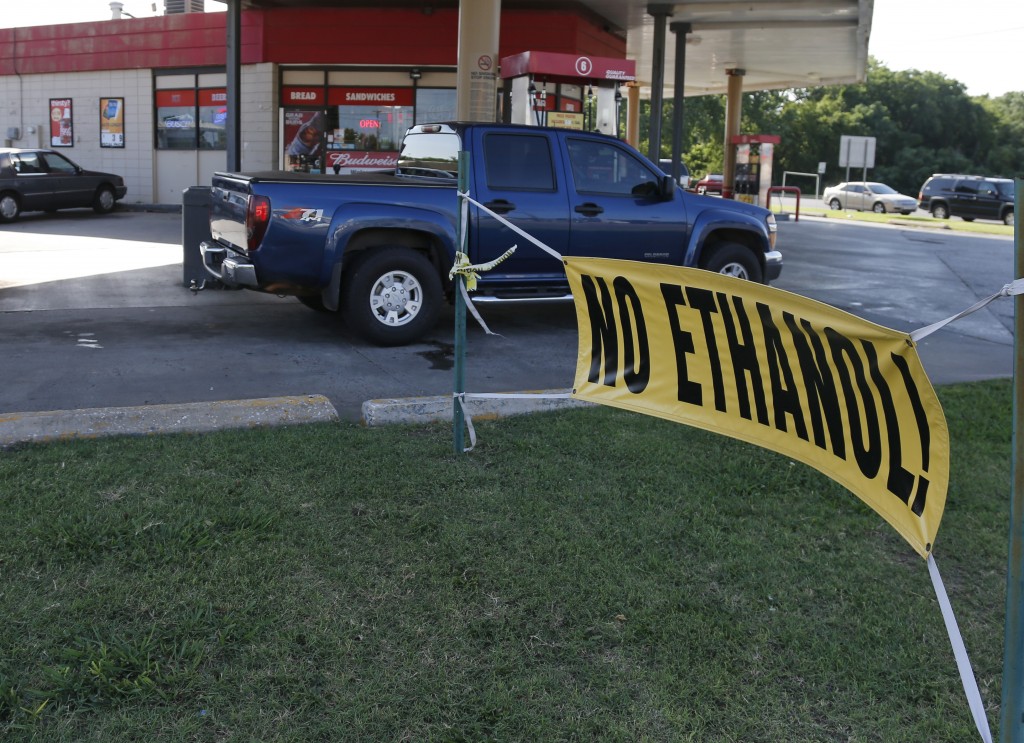 It’s a dilemma for drivers: Do they choose a gasoline that’s cheaper and cleaner even if, as opponents say, it could damage older cars and motorcycles?

That’s the peril and promise of a high-ethanol blend of gasoline known as E15. The fuel contains 15 percent ethanol, well above the current 10-percent norm sold at most U.S. gas stations.

The higher ethanol blend is currently sold in fewer than two dozen stations in the Midwest, but could spread to other regions as the Obama administration considers whether to require more ethanol in gasoline.

As a result, there’s a feverish lobbying campaign, by both oil and ethanol interests, that has spread from Congress to the White House and the Supreme Court.

On Monday, the Supreme Court rejected a challenge by the American Petroleum Institute, the oil industry’s chief lobbying group, to block sales of E15. The justices left in place a federal appeals court ruling that dismissed challenges by the oil industry group and trade associations representing food producers, restaurants and others.

Tom Buis, CEO of Growth Energy, an ethanol industry group, hailed the decision as a victory for U.S. consumers, who will now have greater choice at the pump.

“Now that the final word has been issued, I hope that oil companies will begin to work with biofuel producers to help bring new blends into the marketplace that allow for consumer choice and savings,” Buis said.

The API called the decision a loss for consumers, safety and the environment.

“EPA (the Environmental Protection Agency) approved E15 before vehicle testing was complete, and we now know the fuel may cause significant mechanical problems in millions of cars on the road today,” said Harry Ng, API vice president and general counsel.

The ethanol industry called that a scare tactic, and said there have been no documented cases of engine breakdowns caused by the high-ethanol blend since limited sales of E15 began last year.

The dispute over E15 is the latest flashpoint in a long-standing battle over the Renewable Fuel Standard, approved by Congress in 2005 and amended in 2007. The law requires refiners to blend increasing amounts of ethanol into gasoline each year, as a way to decrease reliance on fossil fuels and lower greenhouse gas emissions.

The EPA has proposed a 16.5 billion-gallon production requirement for ethanol and other gasoline alternatives this year, up from 15.2 billion gallons last year. By 2022, the law calls for more than double that amount.

Biofuel advocates and supporters in Congress say the law has helped create more than 400,000 jobs, revitalized rural economies and helped lower foreign oil imports by more than 30 percent, while reducing emissions of carbon dioxide and other greenhouse gases.

But the oil industry, refiners and some environmental groups say the standard imposes an unnecessary economic burden on consumers. Using automotive fuel that comes from corn also has significant consequences for agriculture, putting upward pressure on food prices, critics say.

“The ever-increasing ethanol mandate has become unsustainable, causing a looming crisis for gasoline consumers,” said the API’s Greco. “We’re at the point where refiners are being pressured to put unsafe levels of ethanol in gasoline, which could damage vehicles, harm consumers and wreak havoc on our economy.”

Along with the E15 court case, the API and refiners have swarmed Capitol Hill and the White House to try to have the current mandate waived or repealed.

Charles Drevna, president of the American Fuel & Petrochemical Manufacturers, which represents refineries, accused the EPA of putting politics ahead of science.

An EPA official told Congress earlier this month that the agency does not require use of E15, but believes it is safe for cars built since 2001.

“The government is not saying, ‘go ahead’ ” and put E15 in all cars, said Christopher Grundler, director of the EPA’s Office of Transportation and Air Quality. “The government is saying this is legal fuel to sell if the market demands it and there are people who wish to sell it.”

Ethanol supporters say E15 is cheaper than conventional gasoline and offers similar mileage to E10, the version that is sold in most U.S. stations.

Scott Zaremba, who owns a chain of gas stations in Kansas, scoffs at claims that E15 would damage older cars. “In the real world, I’ve had zero problems” with engine breakdowns, said Zaremba, whose station in Lawrence, Kan. was the first in the nation to offer E15 last year.

But Zaremba said he had to stop selling the fuel this spring after his gasoline supplier, Phillips 66, told him he could no longer sell the E15 fuel from his regular black fuel hoses. The company said the aim was to distinguish E15 from other gasoline with less ethanol, but Zaremba said the real goal was to discourage use of E15. New pumps cost more than $100,000.

The American Automobile Association, for now, sides with the oil industry. The motoring club says the government should halt sales of E15 until additional testing allows ethanol producers and automakers to agree on which vehicles can safely use E15 while ensuring that consumers are adequately informed of risks.

A spokeswoman for the Alliance of Automobile Manufacturers, which represents 12 major car makers, said that E15 gas is more corrosive and the EPA approved it before it could be fully tested.

Older cars were “never designed to use E15,” spokeswoman Gloria Bergquist said. Use of the fuel over time could create significant engine problems, she said.

The API cites engine problems discovered during a study it commissioned last year, but the Energy Department called the research flawed and said it included engines with known durability issues.

Dinneen and other ethanol advocates said the Supreme Court ruling may serve as a breakthrough for E15, after years of delay.

“With this decision, E15 can finally become a meaningful option for more Americans,” Dinneen said.